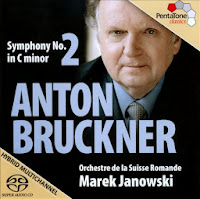 This month, three CDs of music by Anton Bruckner (1824-1896).  First of all, the Symphony No. 2 in Marek Janowski’s continuing survey of the symphonies with the Orchestre de la Suisse Romande.  The second is not the most exciting of Bruckner’s symphonies, but Janowski provides a great sense of the overall architecture of this lyrical work.  As ever, there are the revision issues, and here we have the later 1877 version – until relatively recently the standard performing edition was a combination of revisions made by Robert Haas, and had the Scherzo second in order, rather than third as it is here.  These details aside, this is a commanding performance, with a particularly spirited finale.  Janowski has also released a recording of Bruckner’s Mass in F minor, again with the Orchestre de la Suisse Romande, joined by the Rundfunkchor Berlin.  This is a magnificent 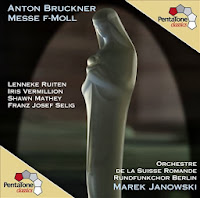 choral work, and it receives a suitably reverent performance here.  The choir produce a full-blooded sound, although there could be a little more attention to the dynamic range – they never really achieve a real pianissimo.  However, the solo quartet is strong, with soprano Lenneke Ruiten particularly deserving mention.  Finally, another cycle of the sympnonies is well under way, with the young French Canadian conductor, Yannick Nézet-Séguin and the Orchestre Métropolitain from Montreal.  The Symphony No. 6 is one of the lesser performed, and here it receives a very clear and straightforward performance.  That is not to say it lacks interest, more that this is a modern interpretation, without over-indulgence or excessive drama.  There are moments when this approach sounds a little matter of fact, but the payoff is uncluttered and precise playing 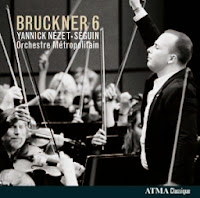 from the orchestra.  Generally, the tempi are steady, and in fact similar to Janowski’s, except for the first movement, which Nézet-Séquin actually pushes slightly – although this does mean that he avoids the slight anti-climax that can often be felt after the mammoth opening movement.  Overall, I enjoyed this interpretation, and intend to seek out others in his series (he has so far recording numbers 4, 6, 7 and 8). 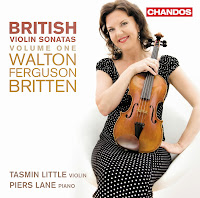 There’s been a bumper crop of recordings of Benjamin Britten (1913-1976) in this anniversary year of 100 hundred years since his birth.  Violinist Tasmin Little, with pianist Piers Lane, has embarked on a survey of British Violin Sonatas, and Volume 1 includes Britten's Suite, Op. 6, as well as Sonatas by Howard Ferguson (1908-1999) and Sir William Walton (1902-1983).  The Ferguson Sonata No. 2 is an engaging piece with a particularly striking slow movement, and edgy and anxious outer movements.  Britten's Suite contains a remarkable range of textures and atmospheres, including a frenetic, urgent Moto perpetuo second movement, a ghostly and unsettling lullaby, and a final quirky, off-kilter and slightly queasy waltz.  Walton's Sonata consists of two substantial movements, essentially lyrical in style, despite the twelve-tone phrase in the second movement's theme.  The variations then give both players extended virtuosic and improvisatory passages on their own and together.  The disc ends with Two Pieces by Walton - the second, Scherzetto, was originally included in the Sonata, and the first, Canzonetta, is based on a mediaeval trobadour theme.  Both Tasmin Little and Piers Lane have great command of the repertoire here, and in the Britten in particular, Little manages to maintain a sweetness of tone despite moments of harsh, astringent writing. 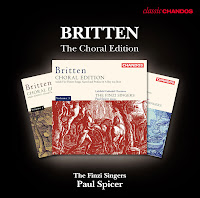 Chandos have been rereleasing a number of great collections of Britten recordings.  'The Choral Edition', is a 3 disc box set of his choral works, recorded by the Finzi Singers, under Paul Spicer in the late 1990s.  This collection includes a lovely recording of the Ceremony of Carols (with Susan Drake on the harp, and sung by female voices, which I much prefer to boy's voices in this work), as well as the Hymn to St Cecilia and A Boy was Born (with the Lichfield Cathedral Choristers).  Less familiar perhaps are the Hymn to St Peter and the Five Flower Songs, amongst many others.  Organist Andrew Lumsden features on many of the tracks, and some well-known names who have gone on to great things appear here as soloists - including tenors Andrew Carwood (of The Cardinall's Musick) and James Gilchrist.  Whilst these are not necessarily benchmark recordings, the overall quality is high, and as a survey of great works by a great choral composer, this is a valuable set. 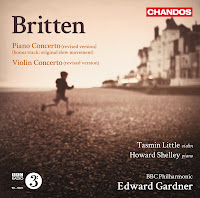 My final Britten release this month is a new recording, with Tasmin Little once again in the Violin Concerto, as well as pianist Howard Shelley in the Piano Concerto.  The BBC Philharmonic are conducted by Edward Gardner.  Included here is also a recording of the Piano Concerto’s original third movement, a 'Recitative and Aria', which Britten replaced with an 'Impromptu' movement in 1945.  The Piano Concerto sets off at a lick - this is exciting music, full of life and energy, and Shelley plays with real spark.  The swirling cascades in the second movement, another of Britten's sardonic, seasick waltzes, and the dramatic turbulence of the Impromptu in particular demonstrate how this concerto has earned its place in the canon.  The Violin Concerto is in many ways a perfect companion, with some fiendish double-stopping required in the second movement, and a mammoth Passacaglia to end the work.  Little matches Shelley's energy, drive and commitment here, and is perhaps even more at one with the BBC Phil's forces under Gardner. 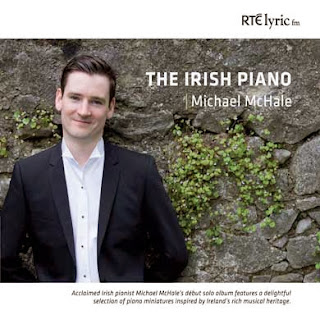 Finally this month, I would also like to recommend a great new CD by Irish pianist Michael McHale, who I came across accompanying clarinettist Michael Collins on a recent release (reviewed here).  His solo release, entitled The Irish Piano, is a wonderfully programmed collection of pieces by Irish and Irish-influenced composers, such as John Field (1782-1837), Samuel Barber (1910-1981) and Arnold Bax (1883-1953).  McHale has sensitively arranged a number of Irish traditional melodies, and also includes works from contemporary Irish composers including Bill Whelan (b.1950) (of Riverdance fame), Philip Hammond (b.1951) and Garrett Sholdice (b.1983).  McHale starts his journey with one of his own arrangements of a traditional tune, Cailín ó cois tSuire Mé, which appears as from the mist, and the subtlety and variety of textures in his arrangement immediately transforms a relatively simple tune into a delightful opening miniature.  There are three more of McHale's arrangements spread across the programme, and all are just as engaging.  His rendition of She Moved Through the Fair is particularly moving, and comes as the perfect contrast to Percy Grainger's (1882-1961) wonderfully ebullient Molly on the Shore.  He couples John Field's Nocturne No. 10 in E minor with Samuel Barber's Nocturne No. 33 (Homage to John Field), and then later includes Field's Nocturne No. 4 in A major, this time pairing it with Arnold Bax's Country Tune.  Barber only visited Ireland once, but had a great interest in Irish literature and had Scottish/Irish roots, although he himself was born in Pennsylvania.  Bax was born in England, but equally developed strong a attachment to Irish literature and Ireland itself, travelling extensively there.  McHale's sensitive touch produces smooth lyrical lines in the Field pieces, and he contrasts this beautifully with the darker chromaticisms of Barber's writing in his Nocturne.  The third of Barber's Excursions Op. 20, also included here is less complex harmonically, but combines American jazzy rhythms with an Irish melody.  Bax's Country Tune is perhaps less distinctive but interesting nonetheless.  The Nocturne by Bax also included here is a lovely piece, very much in the Field/Chopin soundworld. There are also two pieces here by the Irish composer William Vincent Wallace (1812-1865) - a lively Mazurka-étude in A minor, and an early example of the inspiration of Irish melodies on classical music, Roslyn Castle, another enjoyable salon piece.  Philip Hammond (b.1951) draws on traditional Irish tunes from Edward Bunting's Collection of the Ancient Irish Music from 1796 in his two pieces here, which come from a set of fourteen Miniatures and Modulations.  In both John O'Reilly the Active  and The Beardless Boy, the emphasis is on rhythmic energy, combining the feel of lively jigs with the persistent drive of minimalism.  Three contempory composers complete the lineup here.  Donnacha Dennehy's (b.1970) North Circular is a beautifully shimmering miniature, just over a minute long.  Garret Sholdice's (b. 1983) Am Koppenplatz was written for McHale, and its gamelan influence creates a highly atmospheric sense of mystery.  Finally, Ian Wilson (b.1964) in his Sonnenwende (also written for McHale) is a much more aggressive, percussive piece, allowing McHale to demonstrate power and agility in contrast to much of the sensitive lyricism on display elsewhere in the programme.  This is an incredibly well constructed programme, containing an impressive variety of styles and textures, making it one of the few recital discs I have heard in a long time that sustains interest throughout, and removes any temptation to skip any tracks when listening. A real joy to discover.