It was a real privilege to be in the audience for the launch concert of The Tallis Scholars' 40th anniversary celebrations at St Paul's Cathedral on Thursday 7 March 2013.  I was expecting something special, but this concert must be up there with one of the best live music experiences I can remember.

On the programme were some expected 'hits' - Allegri's Miserere, Tallis' Spem in alium.  However, The Tallis Scholars certainly didn't just rely on the 'old favourites' here.  They could have done, and I'm sure the audience would have been happy.  But they used the occasion to show their versatility, and to show how alive and well choral composition is in the 21st century.  Three contemporary composers were present for the premieres (two world and one London) of their works, and all three pieces received warm receptions from the audience.

The concert began appropriately with Tallis - the beautiful yet complex Loquebantur variis linguis, followed by the brief but equally intricate Miserere.  What struck me most in both these pieces was how they drew the audience in, creating a sense of intimacy with some incredible pianissimo singing, particularly in the Miserere - quite an achievement in the cavernous St Paul's acoustic.  They then leapt forward in time, and in Arvo Pärt's Nunc Dimittis they now made full use of the massive resonant acoustic, and when Pärt's atmostpheric harmonies suddenly burst forth on the word 'Lumen', St Paul's was suddenly full of luminous warmth.

The first of the evening's premieres followed - Gabriel Jackson's Ave Dei partis filia.  In a highly effective piece, Jackson is clearly paying homage to the early English composers, yet his use of rhythm is strikingly contemporary.  This created some challenges for the Tallis Scholars, and they worked incredibly hard to ensure that the lively rhythms were clearly articulated.  I would be interested to know if this precision travelled right to the back of St Paul's, but certainly where I was the effect was arresting.  I look forward to hearing this piece again soon.

They closed the first half with Byrd's substantial Tribue, Domine dating from the composer's early career.   The second half of the concert began with Allegri's Miserere - for this, the solo quartet sang hidden somewhere - I think from the Whispering Gallery, but I'm not 100% sure!  As ever, the top Cs were spot on, ringing out throughout the cathedral.  Then it was Eric Whitacre's turn - his new piece, Sainte-Chapelle, was inspired by the stained glass in a 13th century chapel in Paris.  Here, the rhythmic interest centred around the repetition of the word 'Sanctus', and The text, by Whitacre's oft used collaborator, Charles Anthony Silvestri, creates the image of a young girl hearing the angels singing 'Sanctus' - and Whitacre uses the repetition of this word for the rhythmic focus of the piece.  In between, the scrunchy clusters and dissonances typical of Whitacre's music matched perfectly with The Tallis Scholars warm blended sound.

For the last two works, the core group were joined by more singers to perform two works for 40 voices. They began with a performance of Robin Walker's I have thee by the hand, O man.  This was commissioned 10 years ago by the Bridgewater Hall in Manchester as a companion piece to Tallis' Spem in alium, and 10 years on, it has now received its London premiere.  It is a lengthy piece, and unlike the Tallis, where the music sweeps through the eight choirs of five voices, Walker uses the choirs in a variety of ways.  It is an incredibly challenging piece, and there were one or two moments where some of the younger singers looked a little like rabbits in the headlights.  However, it is a great piece that deserves more exposure, and provided a great build-up to the final work of the programme, Tallis' Spem in alium.  It is always a challenge with this piece to achieve a unity of strength and sound across 40 individual voices, and here one or two soprano voices perhaps lacked the power of the more experienced TS members.  However, the meeting of all 40 voices on 'Respice' was electric, and this was a triumphant end to a fabulous concert.

As an encore, Peter Phillips brought us back down to earth with the core members performing Mouton's Salva nos, Domine.  This was actually a perfectly subdued and sublime ending after the drama of the Walker & Tallis, reminding us how much lesser-known repertoire The Tallis Scholars and Peter Phillips have brought to our ears over their 40 years so far - long may this continue!


This review can also be found on the GScene website here. 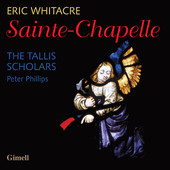 You can also watch Eric Whitacre talking about Sainte-Chapelle here.  A recording of The Tallis Scholars singing the piece was released on 17 March 2013 - download it here.
Posted by nicks-classical-notes at 03:11