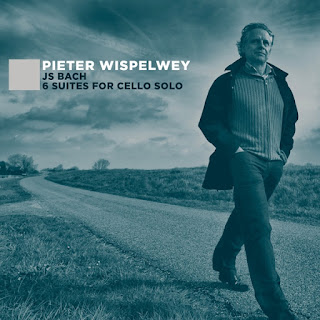 Dutch cellist Pieter Wispelwey has already recorded the Bach Cello Suites twice before - so why has he now, fourteen years on from the last outing, decided to record them again?  Well, he's reached his 50th birthday, but he's also spent considerable time with eminent Bach scholars Laurence Dreyfus and John Butt, and has explored the six suites in perhaps greater depth than ever before.  Bach notoriously left very little instruction for how the suites should be played, not just in terms of tempi or articulation, but even the kind of instrument on which to play them – in fact three different types of instrument are called for.  So for this recording, Wispelwey has recorded them playing on a standard Baroque cello for the first five, and a Violoncello piccolo (with an additional fifth high string) for the sixth, but he has also gone for a lower pitch than usual.  Modern concert pitch is normally 440Hz, and Baroque pitch is generally agreed to be a semitone lower, at around 415Hz.  But Wispelwey has gone for 392Hz – known as the Cöthen pitch - a whole tone lower than modern pitch.  This creates a remarkably different sound world, and rather than being muddy or heavier than one might expect, it actually sounds lighter, freer and even natural, yet without the saccharine sweetness that many modern instrument recordings produce.  There is also an earthy grittiness, produced by the gut strings under a lower tension than usual.  Right from the word go, with the familiar Prelude of the first suite, this sound captivated me, and made me listen afresh to these incredible masterpieces.  Wispelwey talks in the accompanying DVD documentary about the dance movements, and achieving the right tempi for these – some of his tempi are faster than we might be used to, and he makes these movements really sing with a delightful spring.  The rocking cross rhythms of the Prelude to the fourth suite are a highlight for me that I could listen to again and again.  Yet Wispelwey doesn’t see this as his definitive word on the works, and talks of the possibility of further recordings in the future – his passion for them, almost an obsession, is clearly not sated yet! 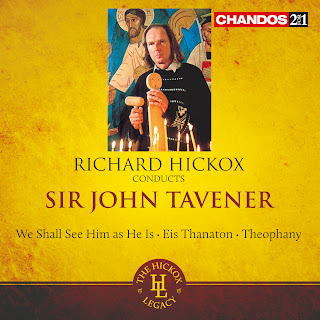 The great English conductor, Richard Hickox, died unexpectedly four years ago now, and the loss to English music is still keenly felt.  Chandos have been re-releasing a number of his recordings which amount to no less than a definitive catalogue of music by the great English composers.  I’ve been listening to two of these – a two disc set of works by Sir John Tavener (b.1944), and ‘The Collector’s Edition’ 6-disc box set of Orchestral Works by Frank Bridge (1879-1941).  The Tavener set includes three works.  The first, We Shall See Him as He Is, is an extensive piece for soloists (Patricia Rozario, John Mark Ainsley and Andrew Murgatroyd), choruses (here the BBC Welsh Chorus, The Britten Singers and Chester Festival Chorus) and an unusually scored orchestra (BBC Welsh Symphony Orchestra) with just brass, strings, organ and timpani (so no wind instruments).  This was composed in 1990, and stems from the period when Tavener was most devoutly immersed in the Greek Orthodox religion, and before he began to embrace other religions, and moved apart from his close relationship with his spiritual adviser Mother Thekla, who died in 2012.  As always with Tavener, he creates long periods of meditative calm, here interspersed with outbursts from the brass and timpani, which don’t entirely work for me.  I have sung in performances of his later work, The Veil of the Temple, and this was more successful at creating moments of high drama to contrast with the extended meditative passages.  Eis Thanaton is for two soloists and orchestra (the City of London Sinfonia), and was written shortly after the death of Tavener’s mother in 1985, to whom he was very close.  Again, the orchestration involves just brass, strings and timpani.  An incredibly haunting work, the soloists Patricia Rozario (a personal favourite of Tavener’s) and Stephen Richardson do a great job as Mother and Son.  The final work, Theophany, makes use of pre-recorded tape with orchestra (Bournemouth Symphony Orchestra), and again two soloists (Jeremy Birchall and Margaret Feaviour).  The tape uses multi-tracked bass chant and a Chinese wind-gong, creating an otherworldly effect. 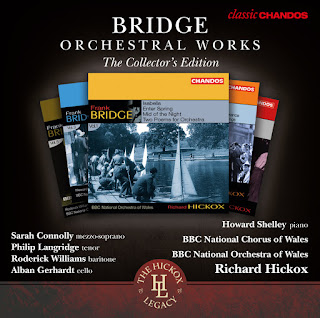 The Bridge set contains a total of 43 separate works, yet consistently draws on most of the same forces – the BBC National Chorus and Orchestra of Wales, with Sarah Connolly (mezzo), Philip Langridge (tenor), Roderick Williams (baritone), Howard Shelley (piano)  and Alban Gerhardt (cello).  Many of these works are barely known and rarely performed – only a few crop up more regularly on the concert platform, including the suite The Sea (composed by Brighton-born Bridge in Eastbourne, and a work which particularly impressed his pupil Britten), the cello concerto Oration, and Phantasm for piano and orchestra.  Yet there are many delights to be found in this collection – from the brief yet expressive Norse Legend to the ambitious early symphonic poem, Mid of the Night.  The songs for solo voice and orchestra, collected together on the last two discs, are beautifully performed by the three singers, and many of them are premiere recordings.  I particularly liked the impressionist Day after day, with highly sensitive singing from Connolly.

These two collections demonstrate how important Hickox was in bringing forgotten English repertoire to our attention, and reminds us what a loss he was to the music world. 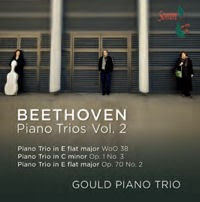 Hot on the heels of the success of the first volume of their live recordings of Beethoven Piano Trios, the Gould Piano Trio are back with the second set.  Here we have two early works, the first of which is numbered ‘WoO 38’ – without opus – meaning that it was only published after his death, and this is followed by Op.1 No.3, composed just four years later in 1795.  Whilst they do not sound revolutionary to our ears, they were both more substantial endeavours than the domestic scale trios from other composers before, already giving notice of the expansive direction Beethoven would take from here on in.  Beethoven already uses the cello very differently in these works too, giving it a much more prominent role.  These two early works are joined on this disc by a later work from his middle period, Op.70 No.2.  Despite his deafness and uncertainty of income now dominating his existence, this work is still full of positivity, much more relaxed in feel to the first of the Op.70 set, the ‘Ghost’, which was on the Goulds’ first disc.  The recordings are again live, from one concert at St George’s, Bristol, and are full of spirit and energy.  The opening Allegro of Op.1 No.3 is especially full of drive, and the variations which follow this has a graceful and sensitive touch.  With I’m guessing another couple of discs to go, I’m very much looking forward to the next volume of what is proving to be an outstanding set.