Stravinsky: The Rite of Spring

Debussy: 'The final 'burst of joy' ..., with Mena almost leaping off the podium, made for a great start to the evening'.

Ravel:  (Lupo) 'balanced the virtuosic challenges, covering the full extent of the keyboard with Ravel’s skilfully lyrical writing for the piano'.

'Effortlessly natural, making this the stand out performance of the evening'.

Stravinsky: 'Mena is a joy to watch, and the final abrupt ending was truly exciting'.

Read my full review on Bachtrack here.
Posted by nicks-classical-notes at 10:43 0 comments

Identifying expressions of sexuality in music is dangerous territory, the ‘gayness’ or otherwise of Tchaikovsky’s music being the most notable example, with analysis often revealing frankly homophobic stereotyping.  However, regardless of the fact that Polish composer Karol Szymanowski’s (1882-1937) was gay, it is hard to deny the sensuality and eroticism in his music, particularly in the first Violin Concerto.  There is a rich, sumptuousness in the orchestration, and the seductively wandering solo violin lines are intriguingly captivating.  Written for violinist Paweł Kochański, who also wrote the closing cadenza, the solo part dominates throughout, and the single movement work flows without break.  And this month, two recordings of the work are out. 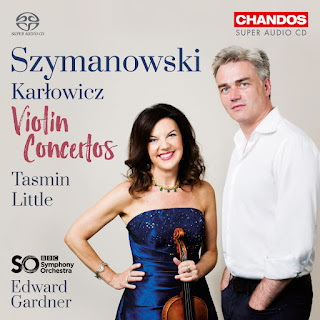 Tasmin Little is joined by the BBC Symphony Orchestra, conducted by Edward Gardner, and her reading of the first Violin Concerto is taught and precise, as well as allowing the fuller, overtly romantic moments to blossom with full intensity.  Gardner again extracts precision from the BBCSO, as well as giving freer rein in the more ecstatic outbursts.  Little couples the first Violin Concerto with Szymanowski’s Violin Concerto No. 2, from about 16 years later, and also the Violin Concerto by a Polish contemporary of Szymanowski, Mieczysław Karłowicz (1876-1909).  Szymanowski’s second Concerto is less overtly sensual, with perhaps more edge and bite, and the central cadenza which links the two movements, again written by Kochański, has much more of a sense of contemplation and reflection, despite its virtuosic challenges, and Little manages this combination with great subtlety of expression.  The Concerto’s final swirling cadenza has great energy from Little, ably supported by Gardner and the BBCSO.  Karłowicz’s Concerto that completes Little’s disc is a much lighter affair, with some delicate woodwind writing in the orchestral textures.  Following clearly in the Tchaikovsky/Bruch concerto mold, this perhaps lacks a distinctive enough voice, but is an enjoyable vehicle for the soloist nevertheless, and Little enjoys the lyrical melodies and expressive flourishes here. 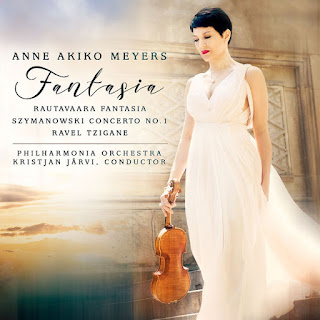 American violinist Anne Akiko Meyers places the Szymanowski at the centre of her disc, preceded by a work she commissioned from Finish composer Einojuhani Rautavaara (1928-2016), which turned out to be his penultimate composition. Fantasia, from which Meyers took the title for her disc, is a single movement work, with a slow, lyrical solo line supported by warm orchestral textures, also relatively slow moving in terms of pulse and harmonic direction.  Meyers’ tone is warm and sweet, and she is supported in the music’s wandering ebb and flow by the rich tones of the Philharmonia Orchestra, conducted by Kristjan Järvi.  This beautiful, lyrical music is ultimately a relatively fleeting reflection at just under 14 minutes, but a highly engaging one nonetheless.  Meyers’ Szymanowski is full-bodied and incisive, and the Philharmonia and Järvi match with a strong dynamic range and rich string sound in particular.  Meyers closes her disc with a lively rendition of Maurice Ravel’s (1875-1937) Tzigane, full of delicate touches and fine articulation, and if the opening cadenza could be grittier, she has great fun with the orchestral dance, and her race to the finish is exhilarating.

Both Szymanowski interpretations are strong, with little to separate them – Little just edges ahead in terms of expressiveness for me.  Little’s Szymanowski No. 2 is also highly engaging, whilst Meyers’ warmly personal Rautavaara is a great attraction.  On value for money, I would say Meyers disc at just over 48 minutes is a little sparse in comparison to Little’s 73 minutes.  Otherwise, both are welcome additions to the catalogue. 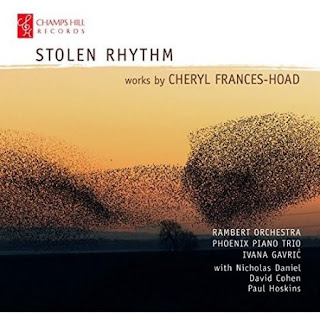 Composer Cheryl Frances-Hoad's (b.1980) continues to demonstrate great originality and variety in her compositions, and her new disc is a great showcase for her writing.  The opening work, Katharsis for Cello and Ensemble, was commissioned by and is performed here by cellist David Cohen, with the Rambert Orchestra, conducted by Paul Hoskins.  Frances-Hoad trained as a cellist at the Yehudi Menuhin School, so clearly has great understanding in writing for the instrument, but what strikes me most here is the writing for woodwind, particularly in the Minuet and Trio, with wind instruments delicately dancing around the solo cello harmonics.  Throughout, whilst there is plenty for the cello to display, much of the interest is in the interplay between soloist and the chamber ensemble.  The Forgiveness Machine, performed by the Phoenix Piano Trio is inspired by Beethoven’s Archduke Trio, and has an ethereal, almost stationary feel, with momentary outbursts subsiding into richly textured harmonies and delicate, long melodic lines, building to a full-blooded climax, before once again falling away to nothingness.  Quark Dances was written for a slightly larger ensemble, again performed here by the Rambert Orchestra and Paul Hoskins, and originally formed part of a ballet inspired by a visit to the Large Hadron Collider at CERN.  Again, Frances-Hoad’s imaginative orchestration is striking, with quirky moto perpetuo writing for the harpsichord in the Scherzando, and slightly seasick string slides underpinning a calling horn and wind flourishes in the central Andante.  Her seven solo piano pieces, Homages, have clear inspiration in specific works by seven different composers, yet she takes these initial inspirations in unexpected directions.  For example, the opening Contemplation, drawing on Grieg’s Op. 7 Sonata, has a cool, jazzy feel, and the dreamy Lullaby moves from Schubert to a much darker, slightly ominous soundworld.   The Ravel-inspired Un Canard hors de l’eau is perhaps closer in terms of harmonic language to the source, but the ethereal Mendelssohnian Song without Words once again has a darkness of mood.  Whilst the harmonic language of Stolen Rhythm is a along way from Haydn, his wit and lively spirit is discernible, and Balkan rhythms abound in Bar(tik)tok.  Pianist Ivana Gavrić negotiates the demands of such diverse styles and moods with ease and convincing commitment.  A Refusal to Mourn for Oboe and String Orchestra closes the disc, with oboist Nicholas Daniel joining the Rambert Orchestra and Hoskins. Written to commemorate the 250th anniversary of the death of Bach, there are roots here in Lutheran chorales, but once again, Frances-Hoad takes her points of inspiration to imaginatively evocative new places.  She exploits the plaintive tones of the oboe in the opening Recitative, then makes great use of the instrument’s quirkier side in the bouncing Fugato, before long lyrical lines return for the oboe in the closing Chorale, and Daniel’s breath control in the final extended solo line is highly impressive.  Frances-Hoad is a composer with impressive creative inspiration, as well as technical command of writing for varied musical forces – highly recommended.

(Edited versions of these reviews first appeared in GScene, February 2018)
Posted by nicks-classical-notes at 06:53 0 comments