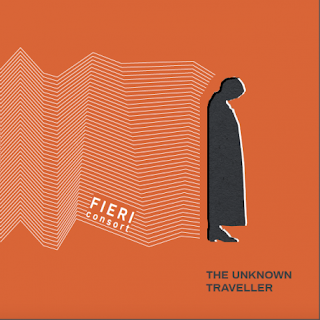 The vocal ensemble Fieri Consort formed in 2012, and two years later became part of Brighton Early Music Festival’s programme for young artists, BREMF Live! Since then they’ve gone from strength to strength, and won the Cambridge Award at the 2017 York Early Music Festival. They gave a stunning performance at this year’s BREMF, as well as several of the 8-strong line-up performing as soloists in the BREMF operas and other festival concerts.  For their second disc, The Unknown Traveller, they have recorded a selection of works from Musica Transalpina, an anthology of mostly Italian madrigals set to English texts, thus fuelling the popularity of madrigals in England at the time.  The anthology was published in 1588 by Nicholas Yonge, Lewes-born singer and publisher (see concert listings for the Lewes chamber music series named after him), although the identity of the translator is unknown (hence the disc’s title).  There are works by Ferrabosco, Palestrina, Lasso, de Monte, Byrd and others.  The Fieri Consort sing one to a part, varying the forces from four to six voices, and their ensemble is always clear and blended, yet the English texts are brought to the fore with precision and smooth articulation.  Conversi’s ‘Zephirus brings the time…’ is given beautifully smooth lines, whereas Ferrabosco’s ‘The nightingale so pleasant…’ has a delightfully swinging delicacy.  They couple this collection with a new work, ‘Short Walk of a Madman’ by Ben Rowarth.  Rowarth uses texts by e e cummings, as well as drawing on Dante’s Divine Comedy for structure for its four movements, Inferno, Purgatorio, Paradiso, and then Paradise Revisited.  The theme of loneliness is also explored, in particular by often isolating the different eight voices in separate tonalities at the same time.  This creates huge challenges for the singers, but the Fieri Consort are totally convincing and highly impressive in their command of these demands.  The second movement in particular has a real sense of torment and madness, with its repetitive, circling motions, and the intertwined tonalities of the third and fourth movements are hypnotic and very effective.  Whilst I’m not sure the placing of this work alongside the Musica Transalpina repertoire entirely works, it certainly demonstrates the range of these young singers’ expertise, and Rowarth’s work definitely has a striking impact.  I look forward to hearing a lot more from these highly talented singers. 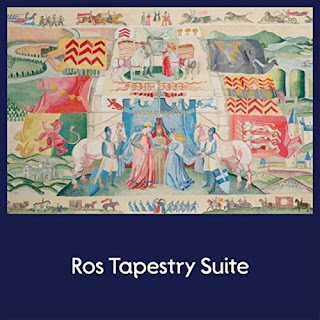 The New Ross Piano Festival has been taking place in New Ross in the south east of Ireland since 2006.  Over the course of three years from 2014-16, the festival commissioned and premiered fifteen new pieces by different Irish composers in response to the Ros Tapestry, a fifteen-panel tapestry begun in 1998 that traces the history of the Norman invasion of Ireland.  They have now been put together on two discs, forming the Ros Tapestry Suite, performed by 12 different pianists, including the festival’s Artistic Director Finghin Collins, as well as Nicholas Angelich, Piers Lane, Lise de la Salle and Cédric Tiberghien.  Given the nature of the source material, a number of the pieces evoke battle scenes, although it is fascinating to hear the different compositional responses to this. So Sebastian Adams’ ‘The Siege of Wexford’ makes use of violent, throbbing chords, particularly exploiting the piano’s lowest registered, with a hammering conclusion.  Gerry Murphy’s ‘Battles in the Kingdom of Ossory’ is warlike too, but much more ominous, with its repeated ‘Jaws’-like bass. There’s a galloping hunt in Andrew Hamilton’s ‘Hunt in the Forest of Ros’, a wild and watery storm in Deirdre Gribbin’s ‘Ex Voto Tintern Abbey’, and a striking build from jazzy evening chords to a tolling warning in Eric Sweeney’s ‘Evening: The Lighthouse at Hook Head’.  Rhythmic energy and drive abound in John Kinsella’s ‘The Celts…’, whereas the rhythms in Elaine Agnew’s ‘The Abduction of Dervorgilla’ are unsettlingly jerky, even jumpy.  All bar one of the tracks were recorded live, and the sound is consistently clear and full-bodied.  The pianists deserve as much praise as the composers here – these are challenging pieces, and all concerned give highly convincing, often intense, and impressively virtuosic performances.  Cédric Tiberghien and Piers Lane merit particular mention for their characterisation, and in Lanes’ case, precise articulation of the melodic fragments within rich textures of harmonic clusters.  And Finghin Collins, who performs four of the pieces here, gets to demonstrate the greatest variety and command of technique.  Overall, this is a fascinating collection, demonstrating an impressive breadth of contemporary composition for the piano.

(Edited versions of these reviews first appeared in GScene, January 2019)
Posted by nicks-classical-notes at 08:33 0 comments

Melnikov and Staier bring intimacy and fresh edge to Schubert

'Staier and Melnikov held this moment perfectly, before releasing us into the trotting rhythms of the final variation'.

'Staier and Melnikov’s tautly sensitive interpretation made for a very special moment of music making'.

Read my full review on Bachtrack here.
Posted by nicks-classical-notes at 09:43 0 comments