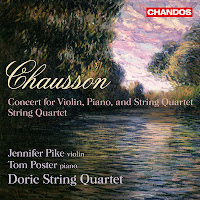 French composer Ernest Chausson (1855-1899) was sadly killed in a cycling accident when he was 44, just as his career was starting to take off.  He was working on his String Quartet, and it was to take a break from this very work that he went on that fateful cycle ride.  Consequently, the work was left unfinished, with the final bars of the third movement being completed by Vincent d’Indy.  A fourth movement was no doubt planned, but it stands up well as a three movement work, and in this new recording from the Doric String Quartet, it receives a subtle and sensitive performance.  The calm slow movement is particularly beautifully played here, and they bring out the complexities of the third movement’s combined thematic material effortlessly.  The String Quartet is accompanied on this disc by his Concert – unusually scored for violin, piano and string quartet.  The Dorics are joined by violinist Jennifer Pike and pianist Tom Poster.  The influence of Chausson’s teacher, César Franck, is here, but Chausson also showed early promise of a individual style here.  The first movement opens gravely with the piano, joined by the string quartet, before the solo violin enters with the second theme.  Poster is in total command of the challenging piano part here, and Pike produces a perfectly lyrical, romantic tone.  This is a fascinating piece, and these young players perform with great authority and spirit.  Another great disc from the Dorics. 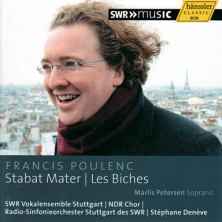 Another French composer, Francis Poulenc (1899-1963) was born in the year that Chausson died.  A composer with an extraordinarily individual style, he is often thought of as the first openly gay classical composer, and was also a practising Catholic.  This new disc from the Stuttgart Radio Symphony Orchestra, conducted by Stéphane Denève, beautifully captures the idiosyncrasies of this witty yet often profound composer.  First, his Stabat Mater, composed on the death of his painter friend, Christian Bérard.  Then we have his early ballet, Les Biches, composed for Diaghilev and the Ballets Russes.  The SWR Vokalensemble Stuttgart perform both works, and are joined by the NDR Chor and soprano Marlis Petersen in the Stabat Mater, which is a glorious piece, full of tenderness and mystery.  Les Biches involves a sequence of interactions, sometimes playful, sometimes erotic, between three athletic men and a number of beautiful woman, including an ‘innocent girl in blue’ and a lesbian couple.  The performances here are very strong, with a uniform, well-tuned choral sound, and great orchestral playing.  The sound of the choir is a little recessed at times, but they excel in the a capella Fac ut ardeat movement.  Petersen’s soprano voice is perfectly suited, and Denève expertly brings out the sensitivity and depth of the Stabat Mater, as well as the quirkiness and jazzy energy of Les Biches. 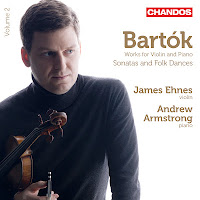 Violinist James Ehnes is joined once again by pianist Andrew Armstrong for the second volume of his survey of works for violin and piano by Béla Bartók (1881-1945).  Here we have the Sonata for Solo Violin, a youthful Sonata that was long forgotten until it was published in the 1960s, and three sets of folk dances, transcribed by the composer others from his solo piano pieces – Hungarian Folksongs, Hungarian Folk Tunes, and Romanian Folk Dances.  The Sonata for Solo Violin was Bartók’s final work for the instrument, and clearly owes a debt to Bach, and was composed for Yehudi Menuhin, after Bartók heard him perform one of Bach’s solo sonatas.  Ehnes shows no fear in this challenging piece, negotiating the leaps and stopped chords with razor sharp intonation.  Yet this is not purely a technical show – he really communicates the essence of this arresting piece.The early Sonata has more obvious roots in Brahms, yet Bartók’s distinctive voice is in evidence too.  Armstrong’s accompaniment is lively, and he particularly shines in the variations of the middle movement.  The folksong sets are products of the composer’s commitment to the collection of folk tunes, travelling from village to village recording the authentic melodies, as opposed to the somewhat sanitised Viennese version of ‘folk music’. 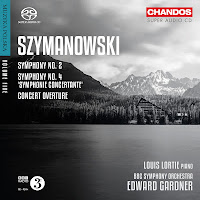 Edward Gardner and the BBC Symphony Orchestra are on their fifth volume of Polish music, now moving on from Lutoslawski to Karol Szymanowski (1882-1937).  They begin with an early Concert Overture, and follow it with two Symphonies – the fourth, a ‘Symphonie concertante’ for piano and orchestra, with pianist Louis Lortie, and the second.  The Overture and the Symphony No. 2 show definite Straussian influence, whilst the Symphony No. 4, a piano concerto to all intents and purposes, has more in common with Bartók – yet all the works have notable individuality, perhaps most clearly in the fourth symphony.  Lortie’s playing here is perfectly matched with the precision Gardner elicits from the orchestra, particularly in the dance-like finale.  It’s evident that the orchestra and Gardner are having a great time in the lively Overture, and they balance the full-on big orchestral sounds as well as the small scale, almost chamber passages, particularly in the first movement.  I really enjoyed discovering Lutoslawski in the earlier volumes of this Polish survey, and now I’m definitely looking forward to more Szymanowski.

(Edited versions of these reviews first appeared in GScene, June 2013).

Posted by nicks-classical-notes at 05:48 0 comments 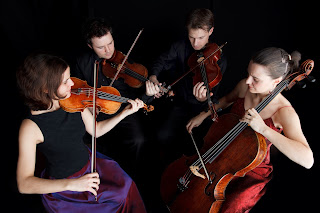 Week 2 of the Brighton Festival for me began with two string quartets, the first being the Elias String Quartet.  This was the second of three concerts this year, with a further three planned for next year's Festival, forming a full cycle of Beethoven's String Quartets.  Unfortunately, I could only make one of their three concerts this year - the downside of such a full and attractive Festival programme - but I'm glad I made it to at least one.  In this second concert (Saturday 11 May, St George's Church, Kemp Town), they performed three quartets - the Quartet in D major, Op. 18 No.3 and the Quartet in F minor Op. 95, 'Quartetto serioso' formed the first half, and after the interval, they performed the Quartet in B flat major, Op. 130.  In all the concerts, they took the same approach of performing three quartets spread across Beethoven's output, rather than going for a chronological approach.  This certainly makes for a more interesting programme, and really helps highlight how far Beethoven took the form from the Haydn-esque early quartets to the mammoth and intense final quartets.  Op. 18 No. 3 was in fact the very first quartet he composed, and is beautifully lyrical and light, although there are some deeply touching moments, notably the end of the slow movement.  The Finale is a wild tarantella, full of energy, yet even here, Beethoven surprises by ending quietly.  The Elias Quartet set the tone for the whole performance, communicating with each other and the audience in an engaging and relaxed way.  The 'Quartetto serioso' which followed couldn't be more different, and the Elias Quartet once again impressed, communicating the tension, even violence, of this intense and dramatic work.  Throughout, Beethoven exploits shocking, sudden Neopolitan harmonic shifts, and the Finale promises no let up - until Beethoven throws off the tension with a sprightly, almost sarcastic coda.  After the interval we were treated to an equally accomplished performance of the massive Op. 130 Quartet.  They performed the quartet with its replacement Finale - Beethoven's original 'Grosse Fuge' was too challenging for audiences at the time, and Beethoven substituted a ligther, more positive end at the behest of his publisher.  As Sara Bittloch, the Elias Quartet's first violinist pointed out in her introduction to the work, it is almost as if after all the trauma and drama of the first five movements, Beethoven is saying 'What the hell, life goes on!'  What impressed me most about the Elias Quartet's performance was their obvious sense of enjoyment, but also the intimate and almost intuitive communication between the players, and with us, the audience.  Sad to have missed their other two instalments this year, but definitely looking forward to hearing more from them next year. 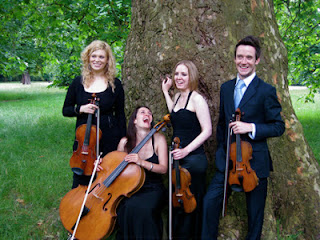 The Cavaleri Quartet formed in 2008, and have acquired numerous awards in the short time since then.  They chose an interesting programme for their lunchtime concert on Tuesday 14 May, with three works spanning exactly 100 years.  The oldest work, Frank Bridge's (1879-1941) Three Idylls, was composed in 1906, and Jonathan Harvey's (1939-2012) String Quartet No.3 in 1995, with Leos Janáček's String Quartet No. 2. 'Intimate Letters' from 1928.  Bridge's Three Idylls are perhaps more often performed than his string quartets, owing to his pupil Britten's use of the middle movement's material for his Variations on a Theme of Frank Bridge.  They are less challenging and perhaps more immediately accessible than the quartets, but no less interesting for that.  The opening Adagio molto espressivo is especially noteworthy, full of melancholy, with beautiful writing, especially for the viola, Bridge's own instrument.  The short second movement, and the final Allegro con moto both aquire a slightly jazzy flavour, almost Gershwin-esque.  Jonathan Harvey's String Quartet No. 3 by contrast is a much less easy listen, with its use of extended techniques and microtones, but definitely rewards the concentration required.  Harvey combines his ten 'themes' in varied juxtapositions, and stretches the four players to their limits.  The Cavaleri Quartet were in complete command of this challenging repertoire, and certainly held my attention throughout, fascinated to know where the music would go next.  They finished their programme with Janáček's String Quartet No. 2, 'Intimate Letters', often referred to as the composer's 'manifesto on love', inspired by his love for his young muse, Kamila Stösslová.  The viola has a prominent role in this work, especially the plaintive solo in the final Allegro, immediately after an almost shocking explosion from all four players, sul ponticello (playing right on the bridge, producing a harsh, glassy sound).  Viola player Ann Beilby excels here, producing a beautifully rich tone.  Great performances all round - this is certainly proving to be a golden age for the string quartet, with so many excellent young quartets on the scene.  Long may it continue.

Posted by nicks-classical-notes at 05:47 0 comments