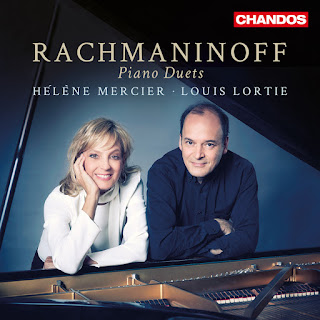 Rachmaninov wrote two major works for two pianos: the Fantaisie (Tableaux), Op. 5 (also known as Suite No. 1) and the Suite No. 2, Op. 17, and then also transcribed his Symphonic Dances, Op. 45 for two pianos.  Canadian pianists Louis Lortie and Hélène Mercier have recorded all three, and the results are delightful.  It is immediately clear these pianists have played together for many years, right from the mercurial rippling of the opening movement of the Fantaisie, through to the whirling exchanges between the two pianos in the sweeping waltz of the Suite No. 2.  The thundering bells of Easter in the Fantaisie’s final movement are hypnotic, and Lortie and Mercier emphasis the percussive nature of Rachmaninov’s writing here to great effect.  Yet they show great sensitivity and emotion in the operatic Romance of the second Suite. This movement, and the Tarantelle finale especially are highly reminiscent of Rachmaninov’s Piano Concerto No. 2, composed just a few months earlier – others perhaps take this Tarantelle at a faster pace, but Lortie & Mercier’s energy and precision cannot be faulted.  The Symphonic Dances, Op. 45 are in some ways from a different world, being the last work to which Rachmaninov gave an opus number, published in 1942, at the end of his compositional career.  He is clearly looking back here, with many references to his own work as well as hints at other composers, as well as the Dies irae chant that crops up so often in his music. Composed as an orchestral work, he premiered his own transcription for two pianos with Vladimir Horowitz in 1942.  A sad air of nostalgia runs deeply through the music, and the pianists here capture this touchingly, still giving bite to Rachmaninov’s occasional outbursts of anger too.  There are many strong recordings of these works, and Argerich/Friere or Ashkenazy/Previn take some beating, but this recording certainly holds its own in such exalted company. 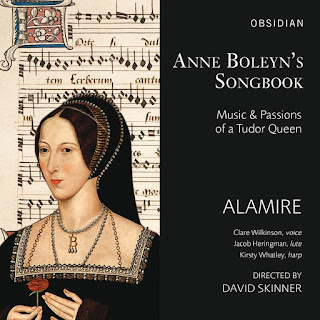 I was lucky enough to recently catch the early music group Alamire, directed by David Skinner (see my review here), performing music from their latest recording project, drawing on music from Anne Boleyn’s Songbook.  Their live performance of music from their 2 CD collection was exceptional, and immediately led me to seek out the recording.  The songbook contains collected motets, mostly sacred, but also a few chansons, and whilst the exact provenance of the collection is uncertain, the connection to Anne Boleyn is broadly accepted.  The chansons are performed with great poise and elegance by contralto (and member of the consort) Clare Wilkinson, accompanied by Jacob Heringman (lute) and Kirsty Whatley (harp).  Alamire’s sound is arresting, and noticeably different from many of the other early music consorts around, despite drawing on a number of familiar faces amongst the vocal forces. Skinner elicits a more direct, assertive sound, with the individual lines more prominent, particularly in the lower voices. Whereas other groups aim for a purity of blend above all else, Skinner allows the structure of the music to speak, and is never afraid to allow the sound to carry some weight. Highlights include the small scale, Mouton’s (c.1459-1522) dark-toned Tota pulchra es, for mens voices, through to the glorious larger scale Stabat Mater settting by Josquin des Prez (c.1450-1521). Often Skinner’s pitch choices are low, again accentuating the richness of the lower voices, and this is particularly evident in Josquin’s wonderful Praeter rerum seriem. The disc is nominated for a BBC Music Magazine Award, and by the time you read this, the result will be known – despite being up against TheTallis Scholars and Tenebrae in the choral category, they stand a very strong chance of winning (update: Tenebrae won...). Highly recommended. 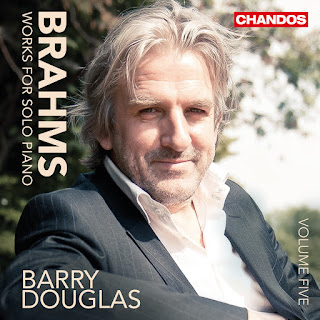 Pianist Barry Douglas is now up to his fifth volume of the Works for Solo Piano by Brahms (1833-1897), and the standard remains impressively high. As with all the previous volumes, he mixes and matches larger scale works (here, three sets of Variations), with shorter works taken from various sets, rather than keeping those sets together.  If you are familiar with the sets of Intermezzi, for example, it takes getting used to not hearing them in juxtaposition, but on the other hand, it makes the ear perhaps focus more on their individual beauty.  So here, as well as two Intermezzi each from the Op 76 & Op 118 sets, there are two Sarabandes, and three of the Hungarian Dances, first composed for piano four hands. The first of the sets of Variations here is the second book using the famous Paganini theme – he recorded Book 1 in the fourth volume CD. Brahms repeats the theme at the start of this second book, and then sets off on another 14 wide ranging variations, covering all the extremes from light filligree detail to real barnstorming virtuosity. The chorale-like original theme of the next set of variations here, the Op. 21 No. 1 set, is a great contrast, and the variations that unfold are perhaps more subtle and less obviously showy to begin with at least, allowing Douglas more opportunity to demonstrate his warm tones, through the slow build to the dramatic ninth variation, before the surprisingly subdued yet touching final variations.  The firey Scherzo is given full weight, in contrast to the sombre second Sarabande and the beautifully delicate Intermezzo No 3 from the Op 76 set.  The lively Variations on a Hungarian Song are joined appropriately either side by three of the Hungarian Dances, and Douglas performs these with joyful panache.  Another great volume in this increasingly singificant survey of Brahms’ piano music.

(Edited versions of these reviews first appeared in GScene, May 2016)
Posted by nicks-classical-notes at 03:45 0 comments

Ensemble Diderot, lead by Johannes Pramsohler chose to promote the UK launch of their latest CD (although already out in other parts of Europe) at St John’s Smith Square in London.  The CD (on their own label Audax) completes a project begun by Reinhard Goebel with Musica Antiqua Köln, who disbanded in 2007, recording six of Johann Friedrich Meister’s (c1638-1697) twelve Trio Sonatas, ‘Il Giardino del piacere’ as their final enterprise. Now Goebel has asked Pramsohler and the Ensemble Diderot to record the final six.

So in their concert, they performed three of the six they have recorded, but also included music by Pachelbel, Keller and Biber.  They opened with the ninth of the Meister set, which begins with a grand Adagio, performed with poise and elegance, followed by a chromatic Fuga. All the Sonatas have multiple, relatively short movements, based on dance forms, but as Pramsohler explained, Meister was one of the first, if not the first German composers to take the prevailing style of Lully and others and move the music away from the ‘danceable’ forms to what became Ars combinatoria. So the French and Italian styles were developed and combined, creating a more intellectual ‘art music’. So whilst the Gigue in this ninth sonata has a real bounce, played by the Ensemble Diderot with lively spirit, it is no longer obviously a simple dance. The Corrente of the twelfth sonata has real rhythmic spice, with accented offbeats, and the Allemanda of the same piece has striking upbeats, all creating great interest and once again moving the form away from the expected. The Ensemble Diderot vary the textures too, with the harpsichord dropping out of the Sarabanda in the twelfth, leaving the cello to provide a walking bass line. The third sonata contains a beautiful Adagio, with the cello starting each phrase with long held notes over which the violins and harpsichord weave plangent cries – here cellist Guglrim Choi maintains a perfectly even, semplice sound for the others to work off. These are exquisite sonatas, and from the performances here, it was easy to see how much the players had taken this music to heart.

To add some variety to their programme, in the first half we were treated to two pieces by Johann Pachelbel (1653-1706) – as Pramsohler said, ‘no, not that Canon!’.  We had the Partie No. 2 in C minor, and the Partie No. 5 in C major from ‘Musicalische Ergötzung’ from 1695, the same year as the Meister Sonatas, and both pieces employed piccolo violins. The former was given great energy with rippling harpsichord underpinning from Philippe Grisvard. The players gave the Gavot real lift, and the Treza had wonderful energy. The bittersweet sound of the higher piccolo violins was particularly noticeable in the Saraband, and the players took the repeat with a subtle pianissimo. The Gigue was given delicate articulation, finishing with some incredibly precise spiccato from the violins.

The two Pachelbel pieces were separated by a Chaconne from a Trio Sonata by a composer new to me, one Godfrey Keller (1650-1704). Apparently born Gottfried in Germany, he settled in England as a musical theorist, harpsichordist and composer. Pramsohler described the Chaconne as a palate-cleansing sorbet, and it bears noticeable similarities to ‘that Canon’ from Pachelbel. The players gave this enchanting piece a pleasing lilt, and Choi on the cello in particular was given a chance to shine here.

Before the second Pachelbel Partie, with a return to the piccolo violins, Johannes Pramsohler took the opportunity to explain a bit more about the challenges of the differently tuned instruments, and ‘scordatura’ notation, where fingerings are marked as if one is playing a normally tuned violin. Having struggled slightly to get this across to Sean Rafferty on BBC Radio 3’s In Tune programme the day before, he decided the best way to demonstrate this was by playing the opening of the Pachelbel Partie No. 5 in C major on normal violins, immediately showing the result of the different tuning and the mental agility required of the violinists to perform this semi-transposed music. They then transferred back to the piccolo violins to perform the Partie No. 5. Again, the piccolo violins give a sweet yet slightly nasal sound, particularly noticeable in the opening Sonata movement. Throughout, Pachelbel provides lots of exchanges between the two violins, relished here by Pramsohler and Roldán Bernabé.

So after two of the Meister Sonatas after the interval, the Ensemble Diderot cleverly finished their programme with a Partita, No. 6 from the ‘Harmonia artificiosa-ariosa’. Whilst the Meister Sonatas are delightful, they perhaps don’t allow for great shows of virtuosity from the players, and of course all create relatively similar sound worlds. The Biber Partita, from only one year later, is like something from another world. The opening Praeludium is reminiscent of a hurdy-gurdy, and very soon, the violins are showing off with some death-defying string crossing, double stopping and spiccato. It felt a little like the Ensemble players had suddenly been let of the leash, and they brought their highly impressive concert to a lively and spirited close. 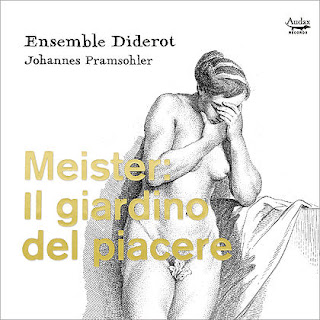 Posted by nicks-classical-notes at 10:15 0 comments