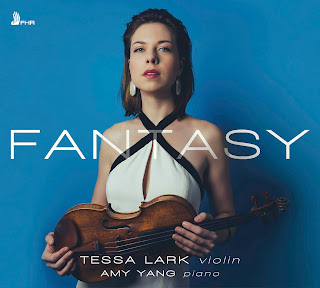 Young Kentucky-born violinist Tessa Lark treads a well-worn path with the title of her debut recording, Fantasy. However, her choice of repertoire here is far from predictable, with three of Telemann’s Fantasies, and her own Appalachian Fantasy nestling amongst the more familiar Schubert Fantasie and Ravel’s Tzigane. Georg Philipp Telemann (1681-1767) was an incredibly prolific composer, and yet his work is still surprisingly often overlooked. The twelve Fantasies for solo violin are gems, and whilst clearly showing influences of Bach and Corelli, they have their own distinctive voice, and Lark gives us three of them here. The dark Grave of the first contrasts with its dancing Allegro sections, and the fourth has great energy in its outer sections. The fifth is perhaps the showiest of Lark’s selection here, but it too has a brief moment of calm in its brief Andante before the final dashing Allegro. In all of these, Lark’s tone is bright and full of life, and she brings out the challenging counterpoint and frequent double-stoppings with poise and ease. Schubert’s Fantasie for Violin and Piano is an extended single movement (at around 25 minutes in all), although it does have a number of distinct sections, and Schubert draws on one of his own songs, Sei mir gegrüsst for the basis of four variations that form the bulk of the piece, following a beautifully singing opening and a playful allegretto, with violin and piano in canon. Lark and Amy Yang (piano) enjoy the playfulness here, and both instruments have a lot to show off about in the challenging variations. Apart from wanting a tad more richness of tone in the opening, there is little to fault here, and this is definitely a performance of equals, with Yang relishing the rich textures of Schubert’s writing for the piano. Lark then follows the Schubert with a real treat – her own composition, Appalachian Fantasy, highlighting another side to her musical heritage as a traditional fiddler. With her violin retuned to produce the traditional open string double-stopping drones, she draws on the melody from the Schubert, as well as bringing in traditional Appalachian tunes, such as Cumberland Gap and Bonaparte’s Retreat, in a fabulously infectious demonstration of her phenomenal talent here. Fritz Kreisler’s (1875-1962) Viennese Rhapsodic Fantasietta, despite the mouthful of a title, is a typically delightful Kreisler encore concoction, harking back to the heyday of the Viennese waltz, and Lark and Yang give this warmth and a sense of sweet nostalgia. Ravel’s Tzigane is a bravura showpiece for violin, although again, the piano part is not to be sniffed at, and Yang rises to its challenges well. Lark throws off the virtuosic gypsy flourishes with appropriate abandon, making this a lively and exuberant finish to the disc. All in all, this is a highly impressive calling card, amply demonstrating the range of Lark’s talents. 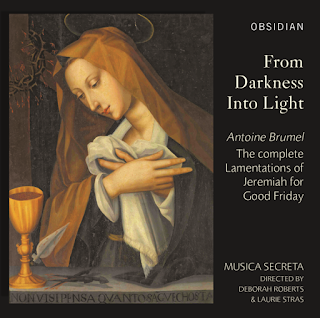 You may have had the opportunity to catch Musica Secreta performing in the Brighton Early Music Festival, and launching their new CD, From Darkness Into Light, which includes the complete Lamentations of Jeremiah by Antoine Brumel (c.1460-1512/13), recently discovered by Musica Secreta co-director, Laurie Stras, in a Florentine manuscript. An abbreviated form of the work, consisting of just two verses and refrain, have been known and performed for many years, but incredibly, Laurie Stras found the complete set, with no fewer than an additional seventeen verses, hiding in plain sight in a sixteenth century manuscript. As a close supporter and friend of Musica Secreta, I can’t claim complete independence in terms of a review of their performances here (although they are stunning!), but this is incredible music by any measure, and the Brumel is joined on recording with a selection of music taken from a convent manuscript, including works by Josquin des Prez (c.1450/55-1521) and Loyset Compère (c.1445-1518). All the music is sung exquisitely here by the nine female voices of Musica Secreta, accompanied by Claire Williams on organ and Alison Kinder on viol. I can’t recommend this highly enough. 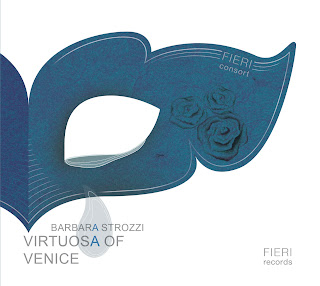 The vocal ensemble Fieri Consort, BREMF Live! alumni, have released their third album, focussing on the music of Barbara Strozzi (1619-1677), ‘Virtuosa of Venice’. This gives them the chance to show off their considerable talents in more soloistic repertoire, with works for one, two or at most three voices. They are joined by Toby Carr (theorbo/baroque guitar), Aileen Henry (baroque harp) and Harry Buckoke (viola da gamba), and Carr and Henry also present delightful solo pieces by Giovanni Kapsberger and Ascanio Maione respectively, as well as a beautifully delicate duet from Buckoke and Carr by Bartolomeo Selma y Salaverde. Strozzi was one of the most prolific composers of her time, and the selection of pieces here demonstrates her remarkable expressive range. Sopranos Lucinda Cox and Hannah Ely have beautifully clear and blended voices in the sweetly flirtatious ‘I baci’ (Kisses), whilst Ely’s pairing with bass baritone Ben McKee in the more racy ‘Morso e bacio’ (Bite and kiss) has suitably more bite. Meanwhile Cox joins mezzo Nancy Cole for the gently throbbing ‘Sospira, respira’ (Sigh, breathe). The entwined virtuosic lines of ‘Il ritorno’  (The Return) are delivered with great sensitively and skill by Cox and tenor Tom Kelly. Tenors Kelly and Josh Cooter have great fun with the comically melodramatic ‘Al battitor di bronzo’ (To a brass door-knocker), whilst Ely enjoys the occasional unexpected sensuous chromaticisms amid the dancing lines of Benedetto Ferrari’s ‘Amanti’ (Lovers), with its swinging baroque guitar accompaniment. Monteverdi’s sweet ‘Si dolce e’l tormento’ (So sweet is the torment), as well as Nicolò Fontei’s gentle duet ‘Dio ti salvi pastor’ (God save you Shepherd) receive expressive readings. The disc ends with the passionately moving ‘Lagrime me’ (My tears) from Strozzi, sung with moving expression by Ely, followed appropriately by Cole, Kelly and McKee singing Strozzi’s ‘Conclusione dell’opera’ with great warmth and tenderness. A wonderfully constructed programme, demonstrating the variety of expression in Strozzi’s music, as well as the outstanding talents of these singers and players – highly recommended! 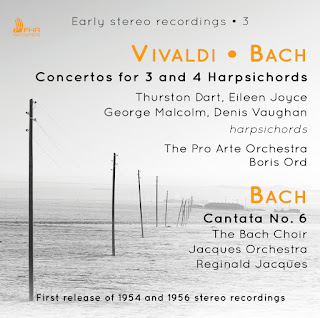 First Hand Records have a fascinating project on the go remastering early EMI stereo recordings from the 1950s. The third volume focusses on music for harpsichords – not just one, but for most of the disc, four. As contemporary harpsichordist Mahan Esfahani informs us in his disc notes, the instruments of that time, known as ‘revival harpsichords’, were hefty beasts, with iron frames and pedals more akin to pianos, rather than the more historically faithful reproductions that the early music movement has led us to expect. Surprisngly, these weighty instruments actually were capable of much less in terms of volume, so in recording with the Pro Arte Orchestra here, the harpsichordists took advantage of techniques such as shifting register to bring out melodies, and lots of sudden dampening effects. The orchestra also has to play pretty quietly most of the time, even though the harpsichords would have been very closely recorded. And the four harpsichordists? George Malcolm (whose own Variations on a Theme of Mozart appears here) was a conductor and composer as well as a harpsichordist, and Thurston Dart was a musicologist, and key figure in the British early music revival. They are joined by two Australians – pianist Eileen Joyce, more known for weighty romantic piano repertoire, and Denis Vaughan, conductor and performer. The four gave annual concerts together until the early 1960s. Here they play Vivaldi’s D minor Concerto for 4 harpsichords (arranged by Dart), as well as Bach’s arrangement of another Vivaldi Concerto, and Bach’s Concerto for 3 harpsichords (with Vaughan on continuo).The orchestral sound is definitely dated, with smooth strings, and plenty of vibrato, although there is still a surprisingly light energy for most of the time, and the jangling harpsichords, particularly in the faster movements creates a lively soundworld that takes the listener along on an enjoyable journey. Following this are four short solo pieces performed by another harpsichordist, the American, Ralph Kirkpatrick. His playing is definitely less showy than the quartet, and he achieves more of the expressive potential of the instrument in the Sweelinck and Pachelbel in particular. The disc (very generous at nearly 85 minutes) ends with a Bach Cantata, ‘Bide with us’, sung in English by the Bach Choir and unnamed soloists, with the Jacques Orchestra conducted by Reginald Jacques. The singing – both choral and solo – is overly warbly and without the clarity of focus we would now expect in such repertoire. However, there is some delightfully delicate playing from the solo oboist and cellist in the second and third movements. Overall, a fascinating insight here into a different period in music-making, and well worth it for the Kirkpatrick and some of the livelier 4 harpsichord movements.

Posted by nicks-classical-notes at 08:05 0 comments

The RPO making sense of Shostakovich: a thrilling Ninth, along with dazzling Prokofiev

Glazunov:
'Shelley and the RPO took great delight in the swirling string melodies and sweet woodwind decorations, communicating a sense of fun and delight in its simplicity'.

Shostakovich:
'Shelley and the RPO were on great form here, with Shelley setting quick tempi and the RPO responding with accuracy and tight ensemble'.

'The finale was suitably thrilling'.

Posted by nicks-classical-notes at 09:51 0 comments