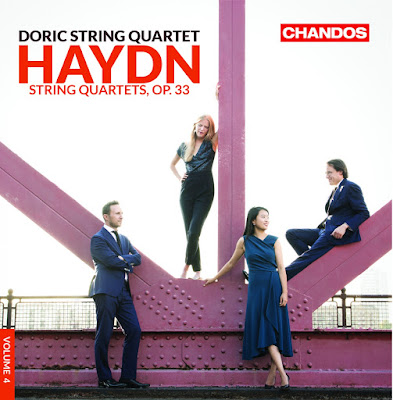 The Doric String Quartet are on their fourth volume of the String Quartets of Joseph Haydn (1732-1809), a cycle they began way back in 2014. Here, they play the six Op. 33 Quartets, nicknamed the ‘Russian quartets’, after their dedication to the Grand Duke Paul of Russia. As ever, the Doric’s performances are impeccable, and they are alive to the energy and fun in Haydn’s writing throughout. The Scherzo of No. 1 has real bite, accentuating the contrast with the seemingly light and delicate Andante that follows, and the finale is taken at a breathtaking lick without any loss of accuracy or detail. No. 2’s Scherzo has a real bounce, the first violinist Alex Redington enjoys the somewhat vulgar slides in the rustic Trio, and the Finale’s ‘joke’ (giving this quartet its nickname) ending is delightfully judged. They give No. 3’s strange Scherzo a dark, veiled tone which works incredibly well, and its Adagio is especially sweet by contrast, all swept away by the rustic dancing Rondo. They exploit the lyrical in No. 4’s Largo, and there’s another blisteringly quick Finale here. Redington makes No. 5’s aria-like Largo sing, and they all make great play of Haydn’s two/three confusions in the Scherzo, before the lightly dancing Allegretto finale, topped off with its crazily fast Presto coda. No. 6’s Andante gets a particularly tender reading here, and its finale is gently understated. The Dorics are clearly alive to the variety here, and not afraid to push tempi in the interest of keeping proceedings alive and vibrant, and they add another strong volume here to their survey. 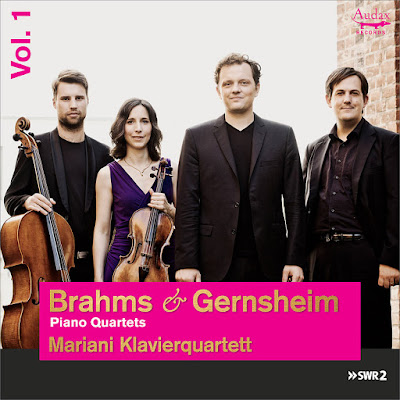 The Paris based label Audax Records, established by violinist and director Johannes Pramsohler, continues to go from strength to strength, with 25 releases, many award-winning under their belt in just eight years. The latest release moves forward a little from the label’s general focus on the Baroque, with the Mariani Klavierquartett beginning a cycle pairing the Piano Quartets of Brahms (1833-1897) with those of a lesser-known composer, Friedrich Gernsheim (1839-1916). The two composers were friends, and Gernsheim was a particular champion of Brahms’ German Requiem, conducting the work on a number of occasions. Even though Gernshiem’s composing career began before Brahms’, he is often dismissed as being heavily influenced by his friend, and his work and reputation suffered from a subsequent ban in Nazi Germany owing to his Jewish heritage. The Mariani quartet’s recording project began in January 2020, but was of course immediately curtailed by the pandemic, so it is great that they have been able to return and complete this first volume, with a spirited and lively performance of Brahms’ Piano Quartet No. 1, Op, 25. Their opening movement draws the listener in immediately from the piano’s opening melody onwards. In the second movement, the cello propels things with constant quavers, whilst the violin and viola converse with the piano. The Mariani cellist, Peter-Philipp Staemmler keeps things moving without allowing his perpetual motion to get in the way of the other players’ conversations. The third movement is a masterpiece of Brahms’ lyricism and harmonic invention, and it is in secure hands here in this warmly sensitive performance, with some particularly warmly rippling playing from pianist Gerhard Vielhaber, and a vibrantly contrasting central section played with great spirit by all. The finale, ‘Rondo alla Zingarese’, with its typical Brahmsian take on Hungarian rhythms and melodies is taken at a great pace, with incredibly impressive virtuosity on display from all here, but once again, pianist Vielhaber deserves particular mention for his effortless dexterity throughout. Gernsheim’s Piano Quartet in C minor, Op. 20 opens with a gloriously rich and flowing movement, and the Mariani players produce appropriately warm tones throughout. Gernsheim’s melodies flow effortlessly, and the full-on dramatic climaxes are powerfully delivered here, yet the Marianis also bring out the moments of delicate detail too. The second slow movement is a beautiful example of Gernsheim’s heartfelt lyricism, and like the slow movement of the Brahms, the Marianis play with deep assurance and sensitivity. The closing Rondo is lively and again packed with melodic ideas, as well as a dancing rhythmic pace. Here it has playful delicacy and energy, allowing for the contrast between the lighter, smaller scale moments and the high-spirited peaks to shine, building to a glorious finish. This is a highly impressive first volume, with assured Brahms coupled with illuminating Gernsheim, and I look forward to hearing more.

(Edited versions of these reviews first appeared in Scene, June 2021)

Posted by nicks-classical-notes at 02:11 0 comments