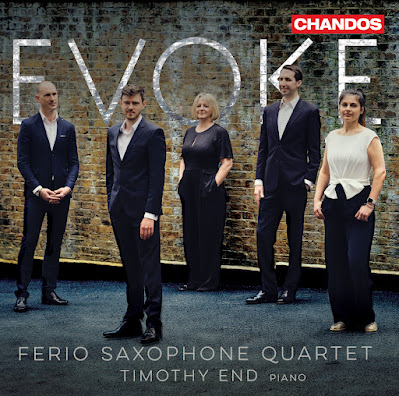 The wonderful Ferio Saxophone Quartet are back, this time joined by pianist Timothy End, with a new album entitled Evoke. They present us with three premiere arrangements by Iain Farrington for this combination, as well as a quintet by the Spanish composer Pedro Iturralde Ochoa (1929-2020). They begin with Shostakovich’s (1906-1975) Jazz Suite. In fact Iain Farrington has taken movements from two works, two from the Suite No. 1 for Jazz Orchestra, and five from the Suite for Variety Orchestra. The latter work was actually assembled not by Shostakovich himself from various of his film and ballet scores. Farrington includes the most well-known movement from the Variety suite, the Waltz No. 2. Used for the film The First Elechon, it has cropped up in many guises on TV and in adverts. With its relentless waltzing bassline beneath a captivating melody, scored for sax in the original, it is wonderfully captivating, and here it is given a subtly understated rendition with beautifully blended textures from the combined saxes. The opening March is a fun circus romp, followed by the quirkily playful Polka. The Waltz No. 1 swirls in a smooth, cabaret style, with the lower instruments kicking in seductively at one point. The Foxtrot begins with a rising stomp building up the tension before the sultry, bluesy melody takes over. In the Little Polka, the piano maintains a driving rhythmic bounce, with rapid rippling lines passed between the instruments. The Dance No. 1 (from The Gadfly) concludes the set in a virtuosic gallop evoking a busy Italian country market. The Suite is full of atmosphere and fun, and Farrington scores well for the four saxes and piano, bringing out the humour as well as the restraint of Shostakovich’s take on cabaret sultriness. Farrington’s own Animal Parade was originally for either organ or piano, but he recast six of the twelve original movements specifically for the Ferio Saxophone Quartet. Between the brief, brashly energetic Entrance and Exit, we have waddling Penguins, taking advantage of the humorous side of the sax, with slightly ungainly wiggles, and slides as they slip in and out of the water. Then comes a Barrel organ monkey in a circus style romp, followed by the Alley cats, with a bluesy, mysteriously sexy solo line for the alto sax. This is in stark contrast to the darkly lumbering Blue Whale, with the piano and lower instruments gliding ominously below. Once again in his arrangement of Bizet’s Carmen Suite, Farrington makes great use of the saxophone’s lyrical qualities to evoke the operatic characters, with the alto sax taking the lead in the Habanera over pulsing chords from the other instruments, and the baritone sax perfect for the Toreador’s Song. Yet despite the potential homogeneity of the four saxes (albeit with piano), Farrington manages to create contrasting textures, particularly in the Aragonaise, with rippling from piano and saxes in answer to the melody. The Habanera could take more play in the rhythms from the Ferios, but their gently swaying Seguidilla exudes Carmen’s joy in life’s pleasures. The final Gypsy Song is full of energy, and whilst the swirling build to its conclusion could take yet more abandon, the overall effect of this set is highly enjoyable. They finish their disc with Iturralde’s Memorias, which is a real gem. Iturralde was a saxophonist, clarinettist and composer, and this work was composed in his teens in the late 1940s. The piano gets things going in the short introduction, evoking a train speeding up and taking us on to the first destination, Lisboa, with a rising and falling melody full of nostalgia, contrasting with full passion from the full sax sections, answered with equal passion by the piano. In Casablanca, it is again the piano that leads off, and the players let rip here in this movement full of jazz, swing, boogie-woogie and ragtime. Alger restores to a slow nostalgic atmosphere, before the Retour to Spain at the end, with rich full textures created by all five instruments, and a flourish to finish. Once again, the Ferios have excelled in this imaginative and spirited programme, and Timothy End’s deft contribution, as well as Iain Farrington’s expertly idiomatic arrangements deserve equal praise here. 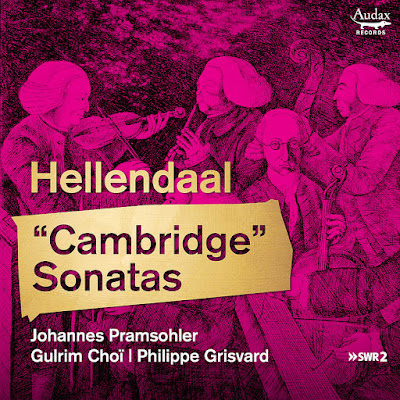 Once again, violinist Johannes Pramsohler has managed to present us with forgotten repertoire that is informative at the same time as being full of interest and enjoyment. Of course, his expertly virtuosic performance, along with equally impressive support from Gulrim Choï (cello) and Philippe Grisvard (harpsichord), is key to this ability to lift what could be a dry, academic exploration, into one of delight and enjoyment. And here, in the six Sonatas by Pieter Hellendaal (1721-1799), from a manuscript preserved in the Fitzwilliam Museum in Cambridge, and therefore known as the ‘Cambridge Sonatas’, we learn of a lesser-known violinist composer who arrived in England from Holland in the late Baroque period, settling in Cambridge in 1762 after time in London and Kings Lynn. He had studied in Italy under the great Tartini, and he brought with him to England much of that Italian technique, style and virtuosity which was in stark contrast to the prevailing chamber music based on the viol family that would have been more familiar to English ears. Having said that, Hellendaal as a composer was no revolutionary, and once establishing a position for himself in the relative musical backwater of Cambridge, he wasn’t pushing forward into the beginnings of the Classical style already taking hold in London. However, his works contain considerable invention, and in these Sonatas, there is significant detail of ornamentation and written-out cadenza passages that indicate his virtuosic technique and compositional abilities. Pramsohler has used some of these indications as a launching point for his own embellishments and ornamentation in the same style, particularly in the slow introductory movements that begin some of the Sonatas. There is also some variety in structure, with several of the Sonatas ending with unexpectedly slow or relaxed movements, with the faster, showier movements in the centre. There are numerous challenging fugues, with the violin taking on two voices, requiring some complex double-stopping. Occasionally these lengthy fugal movements lose a little direction, as Hellendaal gets a little lost in sequential harmonic patterns (eg. the second movement of Sonata No. 2), but they nevertheless demonstrate Hellendaal’s considerable skills both as a composer and violinist. There are some delightfully expressive movements too, such as the Affettuoso third movement of No. 2, with its falling line and echo effects, expressive ornamentation and delicate underpinning from the cello and harpsichord. On the quicker side, the sprightly middle movement of No. 3 is a good example of Hellendaal’s ability to make use of the cello to exchange interest with the violin, and as the virtuosic level increases, there is some wonderful rapid duetting from Pramsohler and Choï here. It therefore comes as a bit of a surprise when this Sonata concludes with a gentle Pastorale, with drone-like double-stopping and sweetly simple repeating melodic figures. Another fugue is the highlight in the middle of No. 4, and the cadenza here is full of delicate virtuosity, with Pramsohler taking the rising bird-like figure right to the limit of the fingerboard. This time, Hellendaal finishes with a rustic, folksy dance, with violin and cello exchanging the melody. Another rustic dance concludes No. 5, with more than a whiff of the hurdy-gurdy, and striking offbeat rhythms. However, once again here, Hellendaal gets a little lost in rising sequential progressions, which takes some of the impact away from the swirling ornamented scales and deftly articulated arpeggios. No. 6, which concludes the disc, has a mournful Andante affettuoso at its heart, and Pramsohler makes the arioso line sing. Some more unusual harmonies surface briefly in the central section, and the movement ends with some buzzing trill ornamentation. Here Hellendaal ends with a lively yet simple Gavotte. A most enjoyable collection, and as ever, performed with winning energy by Pramsohler and friends.

(Edited versions of these reviews first appeared in Scene, December 2021)

Posted by nicks-classical-notes at 03:47 0 comments