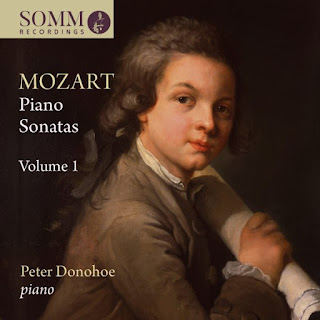 Peter Donohoe launches his series of Piano Sonatas by W. A. Mozart (1756-91) with a disc containing two Sonatas from Mozart's set of six, composed in Munich in his late teens, together with his penultimate Sonata, composed in Vienna a couple of years before his death aged just 35.  Donohoe also throws in the popular Fantasia in D minor, K284 for good measure.  The early Sonatas are full of energy and drive, and as with all Mozart's Piano Sonatas, when played as expertly as they are hear, they sound deceptively simple. Donohoe's tempi are on the well-judged steady side, which means that Mozart's frequent rapid runs and arpeggios are always clear and precise.  The hand-crossing passages in K284 have clarity and poise, and the substantial finale here, a theme and no fewer than twelve variations, has a wonderful arc of development, with more precision in the complexity of triplets against semiquavers and more hand-crossing.  Donohoe holds the final note of the tenth variation over into the lengthy elegiac variation that follows, in which he allows himself a little freedom to allow the elaborate ornamentation to breathe, before the light brevity of the final triple time variation brings the Sonata to a lively close. K280 again appears straightforward, but its first movement surprises with striking chromatic harmonic progressions in the development section, and Donohoe brings out the plaintive lilt of the slow movement, before dancing through the sprightly Presto. His Fantasia is heartfelt and more introspective, less obviously showy, which fits well with the lightness of the D major conclusion, which can sound incongruous if the first half is overblown.  Again, Donohoe takes a measured approach to the opening movement of K570, which allows space for the ranging harmonies in its development section to be registered.  The slow movement here is beautifully contemplative, and Donohoe plays the graceful second half with great delicacy, before enjoying the perkiness of the sprightly finale.  On the basis of this first volume, Donohoe's Mozart is warm, open and precise, allowing the music to breathe, achieving a fine balance, allowing for moments of drama without ever losing classical grace and poise.  Roll on volume 2! 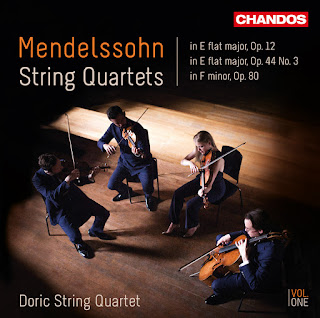 Another first volume now, this time Felix Mendelssohn (1809-1847) String Quartets, from the Doric String Quartet.  Here we have the first and last of Mendelssohn's six published quartets, together with the fifth, spanning from age just twenty to the year of his death, aged 38 (so just 3 years older than Mozart at his death).  If you don't know Mendelssohn's chamber music, then you should - it is always full of life and energy, as well as incredible invention. The first String Quartet, Op. 12 stems from the time of Mendelssohn's infamous Scottish tour that produced the Hebrides Overture and the Scottish Symphony.  Its opening movement never stops flowing, with warm lyricism as well as a turbulent urgency, and the Doric String Quartet never let that sense of perpetual progress to sag.  The canzonetta second movement is light and delicate, and the players skitter through the quicker central section with ease.  Following the passionate and striking third movement, the finale is frenzied and again turbulent, with swirling, dizzying lines for the violins, before a surprising quiet conclusion.  Mendelssohn referred to the late String Quartet Op. 80 as his 'Requiem for Fanny', his beloved sister had suddenly died following a stroke.  It is indeed a work of passion, with its frenzied, nervy opening movement and earnest scherzo with its dark trio section. The slow movement is full of yearning, the Dorics bringing this out with beauty of tone throughout, and the finale, with its hints of Schubert's Death and the Maiden, is wild and heartfelt.  On a short second disc, we have the String Quartet Op. 44 No. 3, completed just before the birth of his first son in 1838.  It is lively and spirited, with a fleeting scherzo and a beautifully lyrical slow movement that moves from light to shade and back, before an energetic finale full of remarkable invention.  The Dorics once again carry the almost relentless energy throughout the work, particularly the lengthy finale.  Highly recommended. 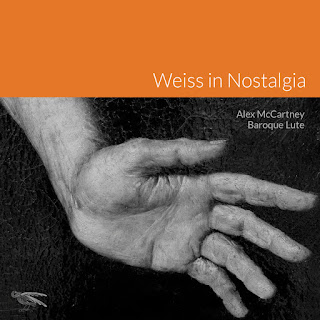 Silvius Leopold Weiss (1686-1850), a contemporary of J S Bach, has been a bit of recent discovery for me, and regular readers will have read about several recordings of his music in these pages.  Lutenist Alex McCartney (another favourite) has brought us more of this lutenist-composer’s wonderful compositions on his latest disc, Weiss in Nostalgia.  In the notes, McCartney explains this title in a rather roundabout way, which might seem rather technical – he performs the works on a 13-course lute, basically an instrument with additional bass strings that would have appeared later than when Weiss composed the two early Suites he plays here.  So he has the idea of an older Weiss performing his early compositions on a larger, more ‘up-to-date’ instrument.  This might not be particularly discernible to anyone not versed in the myriad forms of instruments in the lute family, but there is nevertheless definitely a rather wistful, nostalgic atmosphere here.  This might be partly to do with the very resonant, close recording, which makes for strong sense of intimacy in McCartney’s playing.  But the opening Prelude of the Suite No. 1, for example, immediately establishes a serene, calm atmosphere, followed up in the elegiac Allemande that follows. Nothing is rushed, with a gentle lilt to the Courante, and Menuets played with grace and poise. Only the Gigue lifts the tempo with a bounce in its step, and McCartney expertly brings out the melodic bass and tenor lines from within the texture in the closing Gavotte. The shorter Suite No. 13 that follows has richer, thicker textures, yet McCartney’s playing is never too heavy.  The Courante is rich and flowing, and the final Menuet has drone-like repeated bass notes, presumably with added emphasis on the 13-course instrument.  Whilst clearly challenging music to play, this is never overly showy, and McCartney consistently plays with grace and delicacy, making this a joy to listen to. 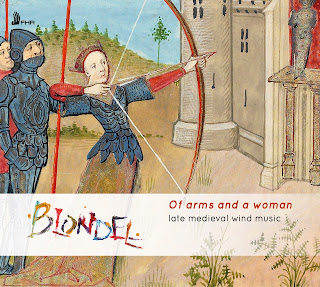 We go back at least three centuries now for medieval wind music performed by the ensemble Blondel.  Here we have shawms (early oboes), recorders and even bagpipes, along with the occasional sackbut (like a trombone) or slide trumpet, and an assortment of percussion instruments including tambor, frame drum and tamburello.  So an eclectic mix, and on a disc of a lot of relatively short tracks, this means there’s an incredible variety of textures and timbres. The overarching inspiration for the disc, which is titled ‘Of Arms and a Woman’, is the work of Christine de Pizan (1364-c.1430), described in the notes as ‘a forthright feminist, writer, political theorist, royal agony aunt and author of self-help books’, and most surprisingly perhaps, the author of ‘The Book of Fayttes of Arms and of Chivalrye’, a highly influential manual on modern warfare, of which Henry VII commissioned an English translation.  Although performed here instrumentally, most if not all the pieces were originally chansons or vocal settings, drawing on a wide variety of texts.  There are the usual themes of love and loss, but also a medieval call to arms in ‘A cheval, tout home a cheval’, and the slightly unsettling ‘Gardez le trait de la fenestre’ (Beware the arrow from the window).  Only one text is by Pizan herself, a poem of grief over the loss of her husband, ‘Dueil angoisseus’ (Agonising grief), set by Gilles Binchois (c.1400-1460).  As detailed are the notes about the music, the connection to Pizan and the overall theme is not always entirely apparent.  There’s lots of anonymous music here, as well as settings by Guillaume Dufay (1397-1474), Robert Morton (c.1430-c.1479), Guillaume de Machaut (1300-1377) and others.  The contrast between the slightly more rustic, eastern-sounding bagpipes, the lively shawms and the more subdued and subtle recorders, as well as the occasional splashes of percussion, allow the five performers here to demonstrate impressive range and versatility.  From the folky bounce and rhythmic energy of ‘A cheval, tout home, a cheval’ played on shawms to the strange rhythms in canon for recorders of Johannes Ciconia’s (1370-1412) ‘Le ray au soleyl’, and the atmospheric dance for bagpipes with tamburello of Machaut’s ‘Je vivroie liement’, this is a fascinating collection, well worth exploration. 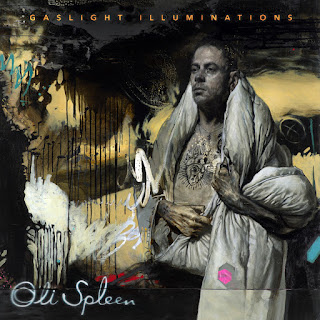 And by way of contrast, I'd like to highlight a local artist, Oli Spleen, who has joined forces with local indie band Birdeatsbaby for his second studio album, Gaslight Illuminations.  Spleen's work might not be an obvious fit with this column, and he is hard to categorise, yet this album, with its deft writing for strings piano, and Spleen's soulful and expressive voice, should have broad appeal.  Written after the death of his father, it touches on deep and dark emotions, and Spleen's closely miked voice is rich and immediate.  There are touches of French chanson in the poignant 'Almost Young', whilst there's more than a dash of country, with steel guitar, in 'Little Lost', vocals shared between Spleen and Mishkin Fitzgerald. Spleen is Bowie-esque in the darkly self-destructive 'Mother and the Spoon', and the self-destruction, even self-harm of relationships continues in 'Ghost', which Spleen concludes with an otherworldly, pained falsetto.  Their cover of Nico & the Velvet Underground's 'I'll be your Mirror' is pared back, over simple piano and strings (with a snippet of a Brahms Hungarian Dance on music box at the end!).  Hana Maria deserves mention for the strings writing and playing, with some hauntingly glassy strings on 'Mister Crystal' and an improvisatory violin line in the weirdly dark and distorted 'Turning Tide'.  Listen and download from olispleen.bandcamp.com.

Posted by nicks-classical-notes at 03:57 0 comments

Three Bartók concertos for the price of one: Capuçon, Eötvös and the BBCSO in Monte-Carlo


'Capuçon was highly convincing, confidently supported by Eötvös and the BBCSO'.

'The BBCSO players were on strong form throughout, with a rich string sound in particular'.

Posted by nicks-classical-notes at 07:14 0 comments

From bandoneon to Beethoven in Belle Époque splendour: Quatuor Renaud Capuçon in Monte-Carlo

Kagel:
'The captivating Jean-Étienne Sotty, spins on a revolving chair, laughs, hums and whistles as he plays'.

Op. 135:
'Their "Song of repose or peace”, as Beethoven described his Lento assai third movement, was exquisitely tender, with some beautifully warm and lyrical playing'.

'The questioning swept to one side, the Quatour Renaud Capuçon left us with a feeling of resolution and acceptance'.


Read the full review on Bachtrack here.
Posted by nicks-classical-notes at 08:31 0 comments

All the rage: the Signum Quartet in Monte-Carlo

van Dijk:
'A powerful workout for the intensely committed players'.

'The intensity that the Signum Quartet gave to the suspensions that layer up brought the movement to a heart-stopping conclusion'.

Posted by nicks-classical-notes at 08:10 0 comments