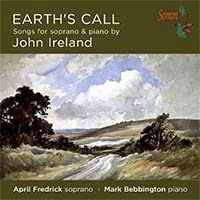 English composer John Ireland’s (1879-1962) songs have been recorded several times in recent decades, but mostly by men.  So it’s interesting to hear 32 of his songs all sung by soprano April Fredrick, and accompanied by a great Ireland pianist, Mark Bebbington.  The collection opens with one of Ireland’s most interesting and individual settings, which also gives the CD its title – ‘Earth’s Call’.  It is particularly in the accompaniment that Ireland, an accomplished pianist himself, creates unsettling uncertainty, which evokes the ambiguity of the text beautifully.  Inevitably with so many songs, many quite short, some stand out more than others.  It is the more substantial pieces that have more time to make a significant impact, such as the atmospheric and sultry ‘Tryst’, and the moving yet slightly disturbing setting of Dante Gabriel Rossetti’s ‘The One Hope’, in which the writer hopes that death will finally bring him peace.  In the cycle setting poems by Christina Rossetti, ‘Mother and Child’, one might expect additional weight of meaning from a female voice.  But perhaps because the songs are all quite slight, each one barely a minute long, they suffer alongside the more substantial fare on offer here and lack the necessary import (although Bebbington brings out the lilting, rocking piano part beautifully in ‘Baby’).  In contrast, Songs Sacred and Profane contains more variety and interest, with the depth of ‘My Fair’ (again, with a striking piano accompaniment) and the ironically brittle ‘The Scapegoat’ contrasting with the poignant simplicity of ‘The Salley Gardens’.  An interesting curiosity is the set of Variations sur ‘Cadet Rouselle’, a popular French song, with the composition of the accompaniment to the 12 verses being shared equally amongst Ireland and fellow composers, Bridge, Bax and Goossens.  Ireland’s use of canon in Verse 8, and the glassy effects in Verse 9 are actually possibly the two strongest contenders here.  Fredrick has a beautiful, clear voice, which suits the clarity and precision of Ireland’s settings.  A greater variety of tone and shade would add more intensity to the darker songs, with perhaps a little more sensitivity at the top of the range, but overall her performances are consistently commanding.  Bebbington’s mastery of Ireland’s tricky piano accompaniments throughout is exemplary.  An enjoyable set, with strong performances of some real gems here. 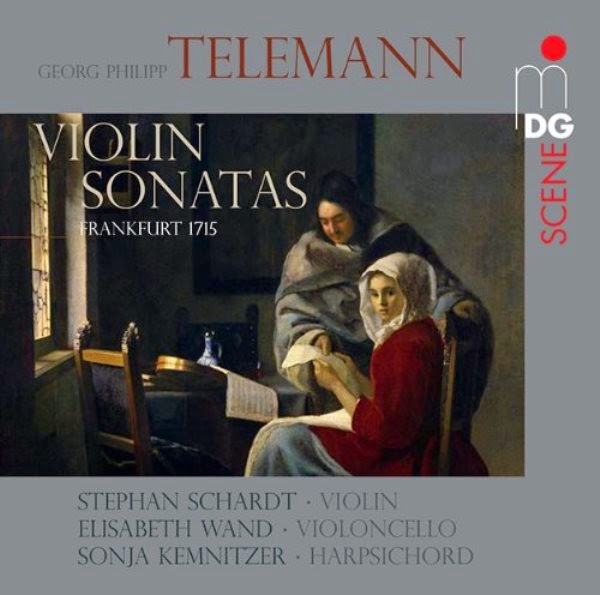 Despite being highly thought of in his lifetime by composers such as Bach and Handel, Georg Philipp Telemann (1681-1767) is often overlooked.  In a way, his vast output (well over 3000 compositions) was part of the problem – as a result, relatively few works have been embraced by the performing canon in the way that those of Vivaldi, Handel and of course Bach have been.   Telemann’s set of Six Sonatas for Violin were composed in Frankfurt in 1715, dedicated to Prince Johann Ernst, Duke of Saxony, also a talented composer and violinist.  All the sonatas have four movements, contrasting slow and fast tempi, often drawing on dance forms such as the courante, sarabande and gigue.  Yet despite this formulaic construction, Telemann produces great variety, and in particular in the faster movements makes great use of unexpected harmonic turns (note the first Allegro of the fourth sonata, and the Gigue in the fifth).  These are not great virtuosic showstoppers – Telemann was more focused on melody and harmonic interest than extrovert demonstrations of technique.  Yet they make for enjoyable listening, and the lack of extremes of technique reveal Telemann’s imaginative harmonies more.  Violinist Stephan Schardt is joined here by Elisabeth Wand (cello) and Sonja Kemnitzer (harpsichord).  Schardt, ex-leader of Musica Antiqua Köln, has also written informative notes on the sonatas and their background, and his in-depth knowledge also shines through his playing.  I would have liked perhaps slightly more dynamic contrast between and within movements, but otherwise these are lively performances.  The disc is completed with an Ouverture from Telemann’s periodical ‘Der getreue Music-Meister’ (‘The faithful music master’), an educational collection of twenty-five lessons for singers and instrumentalists.  Overall, an enjoyable collection, performed with style and enthusiasm. To win a copy of this CD, email me at nbclassical@hotmail.co.uk - draw at end of October (UK only). 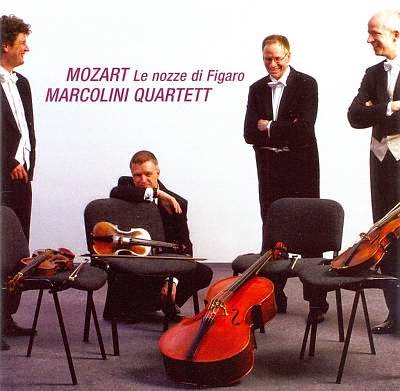 And something unusual to finish with this month – a string quartet, the Marcolini Quartett, playing Mozart’s opera, Le nozze di Figaro (The Marriage of Figaro).  In the centuries before recording, it was commonplace to produce arrangements of popular orchestral works and operas to allow amateur players to hear and play the favourites of the day in their own homes.  Often looked down upon today, these arrangements actually provided a great way to disseminate the music, but also, Thomas Irvine argues in the CD notes, this meant that people had a different relationship with the music by playing it rather than just passively listening.  The Marcolini Quartett play the Overture and arrangements of 19 arias and ensemble pieces from the opera, all arranged anonymously in 1799.  The material has been held in the archive of a Benedictine monastery in Austria, the Cloister Melk (or Melk Abbey), for over two hundred years.  Presumably some talented monks played the music themselves for their own entertainment, and perhaps for their brethren.  The Marcolini Quartett have appropriately recorded the music in the very resonant Cloister Melk, on period instruments.  So if you love the music of the opera, but are happy to experience it in a completely new way, this is worth checking out.  The Marcolini Quartett perform with great spirit, and you don’t have to contend with costume changes, mistaken identity, long lost parents or people jumping out of windows landing on flowerpots…


(Edited versions of these reviews first appeared in GScene, September 2014)

Posted by nicks-classical-notes at 07:41 0 comments