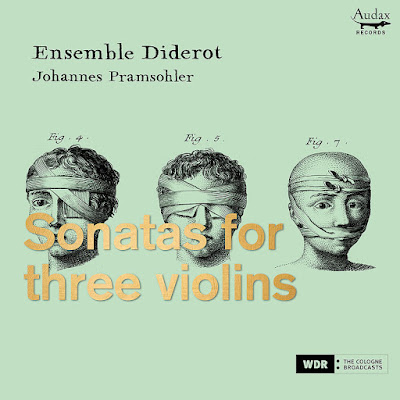 Johannes Pramsohler and his Ensemble Diderot have excelled themselves with their new recording of Sonatas for Three Violins. Pramsohler is joined by fellow violinists Roldán Bernabé and Simone Pirri, together with Gulrim Choï on cello and Philippe Grisvard on harpsichord and organ. The works included here cover most of the 17th century, with a few nudging into the early 18th. Whilst a few of the composers are familiar, many were new to me, such as Giovanni Battista Buonamente (1595-1642), whose beautiful Sonata seconda has the three violins taking over one after the other, picking up the pace with each section, building the intensity and level of ornamentation until the virtuosic canonic conclusion, and final emphatic thud from the organ. Another revelation was Johann Sommer’s (1570-1627) Der 8. Psalm, and its developing embellishment of a mournful chorale melody, with cascading violins imitating each other and dancing over the top of the sombre chorale chords. From more familiar composers, we have Henry Purcell’s (1658/9-1695) Three Parts upon a Ground and Pavane, with sighing violins, running scales and a brief solo harpsichord moment in the former, and darker, twisting harmonies reminiscent of moments from Dido & Aeneas in the latter. And Johann Pachelbel’s (1653-1706) ever familiar Canon, and the Gigue which often gets missed out, receives a blisteringly fast, and positively electric rendition here. The Canon flows like I’ve never heard it before, and all three violinists are clearly enjoying the highly virtuosic, rapid decoration at this speed. Also, the Gigue makes so much more sense, dancing away from the Canon’s bright tempo. Giovanni Gabrieli’s (c1555-1612) Sonata XXI is bright and brassy, and the contrast between the low pitch of the organ and the three high, ornamented violins, with stuttering and pulsing repeated notes rises to a glorious climax. The only work here for just the three violins, Johann Joseph Fux’s (c1660-1741) Sonata, is also an absolute gem, with the close harmony of the violins creating intertwined suspensions and clashes, with some wonderful fugues, all the more complex because of the closeness of the three voices. The players’ precision and dexterity are particularly impressive here. There’s a lightly graceful Sonata from Giovanni Battista Fontana (1571-1630), a brightly virtuosic Sonata from Giuseppe Torelli (1658-1709), and a confident and stately Sonata from Louis-Antoine Dornel (1685-1765), with several striking fugues. Johann Heinrich Schmelzer’s (1620-1680) offering presents a beautiful melody, with a bouncing faster section full of circling progressions. Thomas Baltzar’s (c1631-1663) Pavane is delicate and serene, and Carolus Hacquart’s (c1640-a1686) Sonata decima follows its grand opening with a fugue led off by the harpsichord, and concludes with a joyfully skipping dance. This is a truly joyful disc, with frankly stunning performances by the three violinists and continuo players, and an inspired selection of music showcasing the attraction for well-known and unfamiliar composers of writing for three violins. Highly recommended. 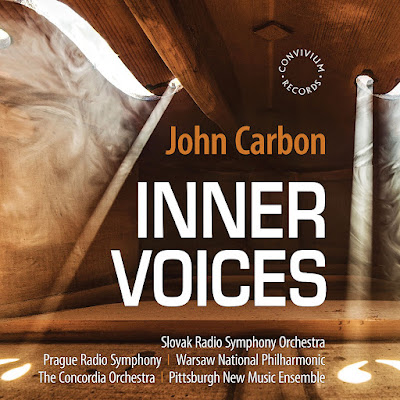 Last year I reviewed a recording of piano works by American composer, John Carbon (b.1951), then unknown to me, and I commented at the time that I wanted to seek out more of his music. Low and behold, Convivium Records have come up with a two CD survey of his orchestral works, titled Inner Voices, after his 1992 three movement work which forms the centrepiece of the first disc. Carbon opens the work confidently with Tigers, although the mood quickly shifts into mystery, with brassy slides and a rather lumbering, menacing gait. Phantom comes next, with more mystery, lots of clanging percussion and brass outbursts. There’s a jazzy, Gershwinesque violin solo here too. Nightride ends the work, with quiet moments of shimmering expectation, constantly punctured by scary outbursts, and timps and snare drum dominate the clattering conclusion. There is a great variety in this collection, including three concertos, for violin, piano and double bass (the latter entitled Endangered Species). As with his piano works, Carbon creates atmospheres and images well in miniature. His suite of 14 sketches, Rasgos, inspired by Goya’s sketches in the Prado Museum in Madrid, for violin and chamber orchestra are particularly successful. Mostly just a minute or so long, these pieces are highly evocative and varied, and Carbon makes great use of the solo violin, as well as a wide range of other instruments to create different textures and atmospheres. The harp often provides mystery, and brass instruments inject drama and urgency. He pairs the solo violin with the oboe for a lament, and with the flute and clarinet for a sultrier texture. His Ghost Town Sketches are similarly brief snapshots, and once again here there is a surprising variety of textures, with the solo clarinet here paired with viola, piano, and sliding string harmonics to create that variety. The larger scale works tend to focus more on drama and tension, and Carbon makes use of full orchestral textures, with often harsh instrumentation for intensity and impact. However, when he allows more lyricism into the music, such as in the uneasy calm of the Violin Concerto’s central movement, there is real sensitivity too. Here, the yearning violin solo is beautifully underpinned by string harmonics at the end of the movement. And in the single movement Piano Concerto, the central rhapsodic section, whilst still highly virtuosic, allows for some almost Romantic pianism to shine through. And somewhat surprisingly, it is in Endangered Species that the solo double bass is the most lyrical, really capturing the sense of yearning of a creature in peril. The performances here are all highly committed and virtuosic, from both soloists and orchestras, including the Warsaw National Philharmonic, the Prague Radio Symphony, and the Concordia Orchestra, with Marin Alsop conducting the latter. Claire Chan as soloist in Rasgos deserves particular mention, as does William Koseluk in the Piano Concerto, but overall, this is an excellent survey of Carbon’s varied output.

(Edited versions of these reviews first appeared in Scene, July 2021)

Posted by nicks-classical-notes at 03:44 0 comments