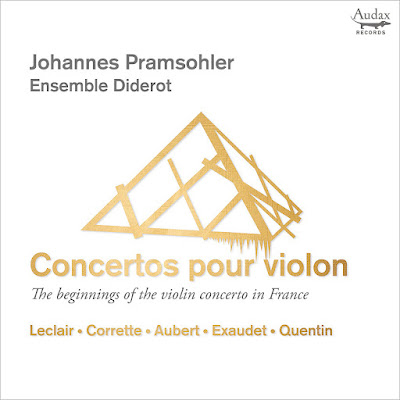 Violinist Johannes Pramsohler has done it again with another collection exploring yet more fascinating early repertoire for his instrument. This time his focus is on the beginnings of the violin concerto in France, and he’s joined by Ensemble Diderot. He explores how France was essentially late to the party, resisting the prevailing Italian style of virtuosic violin concertos of Vivaldi and Corelli and others. Interestingly, it seems that it was through public concerts, rather than the court or church, that the concerto eventually took hold and was then adopted by French composers. The concern seemed to be that by focussing on showy virtuosity in the soloist, the elegance of French style in music would be lost. However, Jacques Aubert (1689-1753) eventually found a way to marry the styles, and in the two Concertos from his Op. 26 set recorded here, he uses four violins plus continuo after the model of Vivaldi’s L’Estro armonico, yet concludes both with longer movements drawing on typical French forms (a Ciaconna in No. 3 and a ringing Carillon in No. 4). High ornamentation in the solo violin part of No. 3 certainly lifts its relative conventionality, and the gently dancing second movement has a watery solo line too. But it is in the Ciaconna that Pramsohler takes flight, impressive as ever in the virtuosic demands of the solo part’s string-crossing arpeggios and high lines ringing out above the running bass part. Similarly in No. 4, all rolls along nicely with a gently pulsing Largo opening, followed by an Allegro with its engaging ‘Ta da!’ figure, and a graceful Aria with closely divided violins, but in the Carillon, after dark unison echoes at the beginning, the Ensemble Diderot ring out, with a rattling violin part from Pramsohler swirling around the bells, leading to an unexpectedly quiet conclusion. Jean-Marie-Leclair’s (1697-1764) contribution here, in a world premiere recording of his Concerto in E flat major, certainly matches the virtuosic solo part with some real delicacy of expression in the slow movement, and Pramsohler delivers this beautifully. 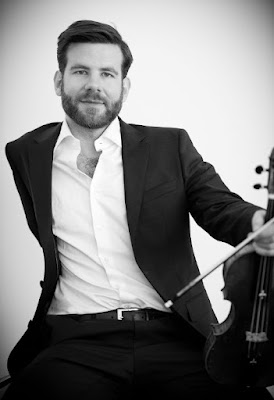 The challenging virtuosity of the Presto occasionally breaks up the flow of the rhythm, but the payoff is an exciting show of technique, with a shuddering accompaniment from the ensemble. Jean-Baptiste-Quentin’s (c.1690-c.1742) Concerto Op. 12 No. 1 has an older, slightly more hybrid stylistic feel, with a church-like, almost choral build up of textures in its opening Largo. It has more spring in its step, with the solo violin taking more centre stage, in its two faster movements, but there is also a delightful arioso third movement, with Pramsohler singing out over a sparse accompaniment. In another world premiere recording, the players present André-Joseph Exaudet’s (1710-1762) Concerto à cinq instruments, with its high, winding melodic solo lines, strange harmonic turns and dramatic cadenza passages. Pramsohler gives the finale his all, performing from a recently discovered written-out Fantasia which extends the movement significantly. There is rattling, scraping, and rocking arpeggios in the borderline violent tarantella-like virtuosity on display here. Calm is perhaps restored in the final work here, Michel Corrette’s (1707-1795) Concerto comique No. 25. The strings are joined here by a flute, and the feeling is definitely French, with Corrette arranging two famous melodies, separated by a delicate flute and harp rendition of another well-known melody, accompanied by gentle pizzicato strings. The Les Sauvages melody from the opening movement is more well-known in Rameau’s version in Les Indes galantes, and the energetic La Furstemberg also has the feel of Rameau. This is another fascinating exploration from Pramsohler and the Ensemble Diderot, performed as always with commitment, energy and great virtuosity. I can’t wait to hear what other repertoire he has to unearth in this ongoing story of the solo violin. 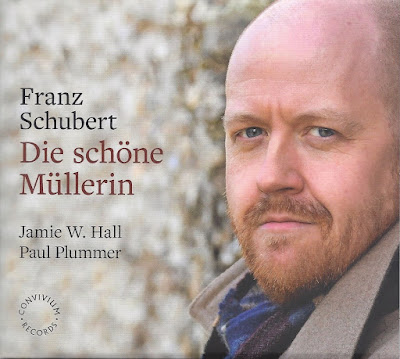 Baritone Jamie W. Hall has an established career as a concert soloist and ensemble singer, and is a full-time member of the BBC Singers, the only full-time professional British choir. Like many performers, the pandemic has had a dramatic effect on his performing life, and in the early lockdown periods, he shared a regular series of solo song performances, at his piano, in his dressing gown (#BathrobeRecitals on Twitter). He also, along with fellow singers, streamed some wonderful song recitals on YouTube (at Proud Songsters), with Hall performing a range of repertoire, including Bach, Vaughan Williams and Schubert. But it was his performance, with pianist Paul Plummer, of Schubert’s (1797-1828) Die schöne Müllerin that stood out for me (see below). Hall has clearly grasped the enforced restrictions on his musical life and turned them into an opportunity to explore the music in depth, developing his approach to the work to the extent that he then decided to record his interpretation. He launched a Crowdfunding campaign (which I supported on the back of that online performance), and now the CD has arrived. At over an hour in duration, Schubert’s Die schöne Müllerin is an ambitious undertaking. Using 20 poems by Wilhelm Müller (who also authored the text for Schubert’s Winterreise), it tells the tale of a travelling young man who falls in love with a miller’s daughter, only to be usurped by a huntsman, and the tale doesn’t end well, with our travelling man in despair drowning himself in the brook. The brook features large throughout the cycle, with watery, rippling piano accompaniments. Many of the songs are fairly straightforwardly strophic, yet Schubert shifts the moods both harmonically and lyrically, so that the singer gets the chance to demonstrate a great range of emotions, from simple delight in nature early on, to tenderness, longing, full on passion, through to jealousy, even anger and ultimately desperation. Hall 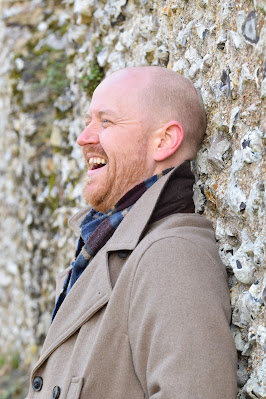 captures this wonderfully, and draws us into the tale from the outset, with a tender lightness of touch in the opening song, Das Wandern. The Romantic introspective nature of the cycle is key – this is all about the travelling man’s own emotions, we get little of what’s going on for the other characters. Hall gives us that sense of surprise and wonder in Halt! in the melody’s lilting swing, over the piano’s clatter of the turning mill wheels. Then as he falls in love with the miller’s daughter, Hall injects a sense of urgency and impatience in Ungeduld, as Plummer’s piano accompaniment stutters anxiously. Passion builds in the turbulent Mein!, with an edge added to Hall’s warm tone, and the burbling brook has returned in the piano part. Later, Hall delivers the rapid text of Der Jäger with an air of breathlessness as the traveller see the threat of his rival, and this turns to jealousy, anger, fear and ultimately desperation in Eifersucht und Stolz (Jealousy and Pride). But moving towards the conclusion, there is a tired resignation in Der Müller und der Bach, as he takes comfort in the brook, before the disturbingly calm final lullaby, Des Baches Wiegenlied. Hall captures this range of emotions well, and tells the tragic tale with remarkable clarity as a result. With a basic familiarity with the story, there is no need to scour the texts (although full text and translation by Plummer are supplied), as the combination of Hall’s delivery and Schubert’s exquisite mood-painting is so transparently communicative. I look forward to his Winterreise soon!

Posted by nicks-classical-notes at 03:33 0 comments