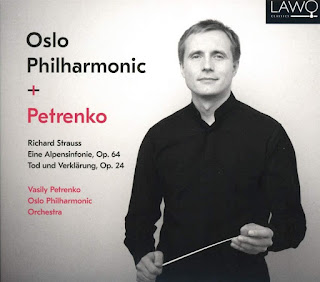 Richard Strauss’ (1864-1949) Eine Alpensinfonie, Op. 64 (Alpine Symphony) is a fabulous piece of extended tone poem writing, rather than a conventional symphony.  It requires a huge orchestra, including wind and thunder machines, cowbells, and the heckelphone (a member of the oboe family, similar to a cor anglais).  Yet it’s not just an overblown orchestral romp – there is some beautifully subtle music here too, and Strauss captures the drama and danger of the mountains, as well as the sheer beauty and simplicity of an alpine meadow, from sunrise to sunset. Vasily Petrenko with the Oslo Philharmonic is a revelation here in the third of their Strauss recordings – all the detail of this phenomenal journey is there, but there is always a sense of direction and forward momentum. The big, brassy moments are powerful, but never overblown, yet there is some beautifully delicate solo string playing, wandering by the stream in the forest, and the arrival at the summit is lushly climactic. In the ‘Vision’ that follows, Petrenko steers a steady path through the meandering harmonic instability, and the storm is dramatic and suitably scary, before a warm sunset and subdued sink into the night. Petrenko and the Oslo Philharmonic follow this masterpiece with a passionate reading of Strauss’ earlier tone poems, Tod und Verklärung, Op. 24 (Death and Transfiguration). The music depicts a dying artist reflecting back over his life, before reaching ultimate transfiguration in heaven. A consistent theme in Strauss’ tone poems is that idea of our hero defeated in the here and now, but somehow attaining victory, here in a final blaze of C major. Again, Petrenko is alert to detail here, but also the essential trajectory of Strauss’ story-telling arc. Highly recommended. 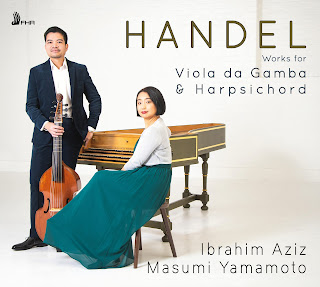 I reviewed Ibrahim Aziz’s solo viola da gamba album last year (here), and he’s now back, joined by harpsichordist Masumi Yamamoto in a recording of works for the two instruments by Georg Friedrich Handel (1685-1759). Here we have a mixture of his works transcribed by Handel himself, and also by Aziz from Sonatas originally for violin, and a keyboard Suite, as well as one Sonata attributed to Handel, but possibly by Johann Kress (1685-1728). But no matter, Aziz owns them for the viola da gamba with a beautifully warm tone and delicate ornamentation. The balance between Aziz and Yamamoto on harpsichord is well-judged, and despite some weighty double-stopping in the Allegro of the G major Sonata, for example, the light harpsichord is never overpowered. The Largo of this same Sonata is a beautiful gem, and Aziz makes his instrument ring with great energy in the final virtuosic Allegro. Aziz includes a stately Prélude in the French style from a Suite by Sainte-Colombe le Fils (c.1660-1720?), once again showing off his resonant tone and agility. Yamamoto follows with Handel’s Suite No. 4 for harpsichord, playing with vigour and precision in the opening Fuga, a flowing energy in the central Courante, and a joyful bounce to the final Gigue. Another transcription by Aziz next, a Prelude from one of Handel’s keyboard Suites, making particular use of the lower reaches of the instrument, again with that ringing, rich tone. The duo are reunited for the remainder of the disc, in another Aziz transcription of a keyboard Suite, and a final Sonata. The Suite concludes in a striking Chaconne, allowing both players to demonstrate their virtuosity. The Sonata, for Viola da Gamba and Obbligato Harpsichord puts the right hand of the harpsichord together with the viola da gamba in a melodic duet, particularly impressive in the two Allegros, giving the disc a suitably energetic and virtuosic conclusion. This is a delightful collection, and the two players’ commitment to and command of this repertoire shine throughout. 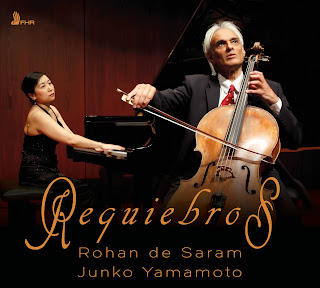 Cellist Rohan de Saram is now 81, although this disc was recorded back in 2012, when he was a mere 73 years old. Born in Sheffield to Sri Lankan parents, de Saram studied with Gaspar Cassadó (1897-1966), as well as Cassadó’s teacher, Pablo Casals (1876-1973), and this heritage goes right through this recital, with transcriptions from both of them, as well as the disc’s title piece, Requiebros, by Cassadó himself, played here with clear passion and affection. Cassadó’s transcription of Granados’ Intermezzo from his opera Goyescas is another delightful gem, again played with gentle warmth. There are some old favourites here, such as Saint-Saëns’ Le cygne from Le carnaval des animaux, and Casals’ transcription of Fauré’s exquisite song, Après un rêve, both beautifully performed with touching simplicity. Yet de Saram’s commitment to performing contemporary works is also reflected, with premiere recordings of Chasse au moment by Oliver Frick (b.1973), and Toshio Hosokawa’s (b.1955) Lied III. The former is a mercurial attempt to capture a sequence of fleeting moments, and is highly atmospheric and evocative. Hosokawa aims to make a connection between the lieder of Schubert and his own musical traditions, and the result contrasts sustained, almost lyrical moments for the cello with sudden angular interjections by both cello and piano, made equally effective here by both players – de Saram is accompanied effortlessly throughout the disc by pianist Junko Yamamoto. Manuel de Falla’s Suite populaire espagnole originated as a suite for violin and piano, and six of the seven original movements were arranged by Maurice Maréchal for cello and piano. The piano accompaniment often mimics the guitar, and the themes emanate from different areas in Spain, from the Murcian El paño moruno, through the beautiful Andalusian lullaby, Nana, to the rhythmic character of Jota, from Aragon. Similarly, later in the collection, we have Schumann’s Fünf Stücke im Volkston, Op. 102, and here the folk-style influence is seen in the unusual rhythmic structures. In both sets, de Saram enjoys the rhythmic interest, whilst bringing out the folk melodies with a warm singing tone. Ravel’s Piece en forme de habanera is another popular encore piece, with its Cuban infused rhythms, and Saints-Saëns’ Allegro appassionata, Op. 43 that ends the disc also allows for a greater show of brilliance. This is a recital of exemplary performances, made all the more fascinating given the history and connections to some of the great traditions of twentieth century cello playing. 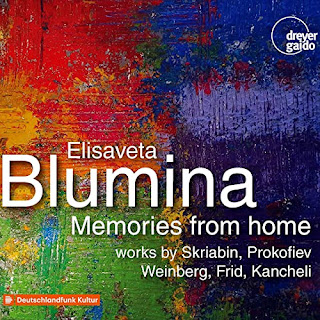 Russian-born pianist Elisaveta Blumina moved to Germany in her teens, and whilst (as she points out in the notes for her latest double CD release) young pianists in Russia are often schooled in Austrian and German classical repertoire, she feels very much that Russian and Soviet music is ‘in her blood’. So this collection explores that heritage, beginning with Scriabin’s Five Preludes, Op. 16. These beautifully colourful miniatures (whilst probably not a synesthete himself, he was very much influenced by the concept, making strong associations between keys and specific colours, for example) show the influence of Chopin, but with hints of Scriabin’s stretching use of harmony. Prokofiev’s Visions fugitives that follow are equally fleeting miniatures, yet Blumina captures the individual moods wonderfully, even though none last for more than two minutes – she treats us to six here out of the complete set of twenty. Blumina has championed the revival of the music of Mieczysław Weinberg (1919-1996), a Polish-Jewish composer who fled the Nazis and spent the rest of his life in the Soviet Union. Here we have just two short Fugues, dedicated to Ludmila Berlinskaya, and the story goes that Weinberg wrote them for Ludmila who had forgotten to prepare two fugues for her homework at the Conservatory – she handed them in, but received very bad marks for them, perhaps because of their quirky yet subtle individuality, combined with some serious ‘rule-breaking’! The remainder of the first disc is given over to Griogori Frid’s (1915-2012) Hungarian Album, Op. 54. These are delightful character pieces, capturing evocative scenes such as The Amusement Park, an Evening at the River, At the Zoo, and a walk In the Forest. The longest here, at four and a half minutes, is a watery flowing Broad Danube, in great contrast to the bouncy Excursion outdoors with Hungarian Friends. These are not virtuosic pieces, but they require delicacy and intimate touch, as well as that ability once again to distil a mood in just a few moments, all of which Blumina excels at here. The second, shorter disc consists of twenty-two out of Giya Kancheli’s (1935-2019) 33 Miniatures for piano. The CD was recorded in 2018 when Kancheli was still alive, and Blumina discussed the pieces with him, particularly his original very slow tempi for some of the pieces. She clearly has a great affection for these warmly sentimental fragments drawn from the Georgian composer’s film music, and this is their first recording. They stand in stark contrast to the more incisive, angular music of the first disc, a welcome addition here, and overall, this collection of fleeting backward glances to Blumina’s homeland is a varied tribute to the power of the miniature to move and capture a mood or emotion in a moment. 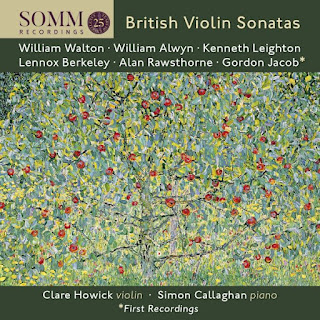 Violinist Clare Howick joins pianist Simon Callaghan for a survey of British Violin Sonatas, and there are a surprising number to choose from – Tasmin Little recently released her third volume of them. Howick and Callaghan open with William Walton’s (1902-1983) Sonata, which consists of two substantial movements, essentially lyrical in style, despite the twelve-tone phrase in the second movement's theme.  The variations then give both players extended virtuosic and improvisatory passages on their own and together, and Howick immediately demonstrates a great range, with lyrical lines contrasting forensic precision in the more angular moments in the variations. This is followed by the Sonatina by William Alwyn (1905-1985). An earlier work (from c.1933) than Walton’s, Alwyn rejected the work later in his life, yet it is delightfully proportioned and melodically inventive, flowing effortlessly from its rippling opening, through the darkly lilting central Adagio, to the energetically bouncy finale. Again, Howick plays with warmth and lyricism, and both players use the full range of dynamics to great effect. Howick & Callaghan give premiere recordings here of three miniatures by Gordon Jacob (1895-1984), his sinuous Elegy, playfully virtuosic Caprice and delicate Little Dancer – all great programme fillers or encore pieces. Kenneth Leighton’s (1929-1988) Sonata No. 1 launches straight into a rich sound world with thick, swirling textures, particularly in its weighty piano part, played with command by Callaghan here, yet never overwhelming Howick’s rich tones. The slow movement’s beautiful chorale-like piano opening combines with an intensely nostalgic melodic line, and the emphatic finale nevertheless concludes with light hint of the chorale-like material. Alan Rawsthorne (1905-1971) wrote Pierrette: Valse Caprice as a wedding present in 1934 for his first wife, violinist Jessie Hinchliffe, and it has a light and joyful feel, played here with great tenderness. Lennox Berkeley’s Elegy and Toccata, Op. 33 Nos 2 & 3 were written for violinist Frederick Grinke (as was No. 1 from the set, variations for solo violin, not recorded here). The Elegy is tender and expressive, whilst the Toccata has an infectious drive from beginning to end. This disc amply demonstrates a huge variety of styles and textures, beyond the expected limits of forty or so years of British composition, and Howick and Callaghan deserve credit for this well thought out programme, elegantly performed throughout.

(Edited versions of these reviews first appeared in GScene, June & July 2020)
Posted by nicks-classical-notes at 08:48 0 comments