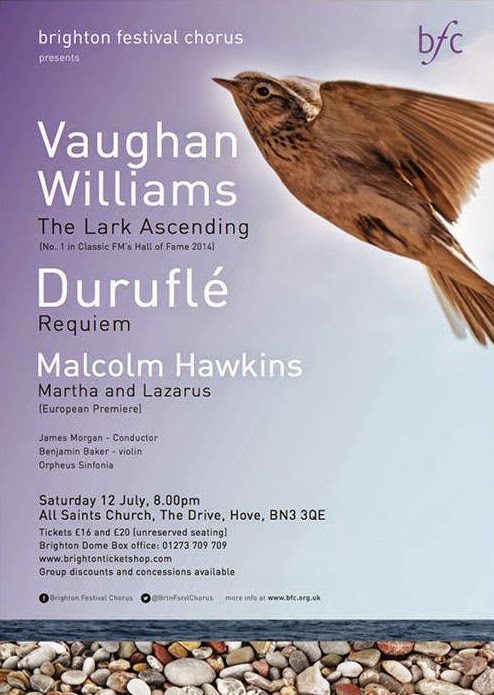 Brighton Festival Chorus are joined by the Orpheus Sinfonia, with conductor James Morgan for their summer concert including Duruflé's Requiem, the European première of Malcolm Hawkins' Martha and Lazarus, and Vaughan Williams' The Lark Ascending, with violinist Ben Baker.
Saturday 12 July, 8.00pm, All Saints Church, Hove. 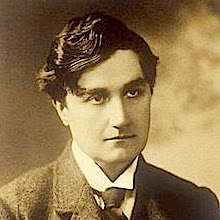 In May, The Lark Ascending was voted Britain's favourite classical work for 2014 in the annual Classic FM Hall of Fame poll - a repeat of its successes from 2007 to 2010. Three years ago it was voted the best Desert Island Discs track. What is it about this rhapsody that gives it such broad appeal? Written in the summer of 1914 on the eve of war, it has a poignancy and beauty, a nostalgic essence that chimes with being reflective and English. The violin cadenzas are its quintessence. "A piece like this lives and breathes in performance. It is never the same." (Julian Lloyd Webber).

Duruflé's greatest composition, the Requiem, Op. 9, completed in September 1947, enjoys a reputation as one of the undoubted masterpieces of the twentieth century choral repertoire. The single piece most responsible for establishing his fame worldwide, it continues to enjoy frequent performances in the West and the East alike. Reviewers have described it as "sumptuous, suffused with a tender radiance, of a noble and restrained elegance, a work of scrupulous craft, beautiful unity and real grandeur." (James E. Frazier).

Martha and Lazarus by Malcolm Hawkins (b.1944) 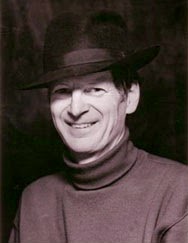 This work was inspired by the Caravaggio masterpiece 'Raising of Lazarus', recently rescued from dank obscurity in a church in Messina, Sicily, and unveiled, luminously restored, in Rome in 2012. Born in Oporto, Hawkins was educated in England, and now lives in New Hampshire, USA. This performance will be the work's European première.