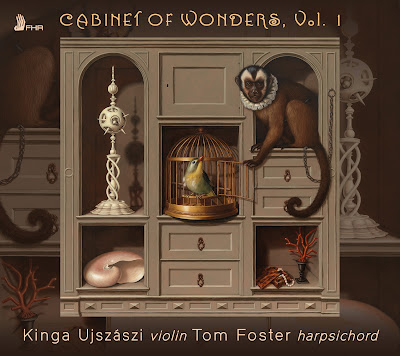 Violinist Kinga Ujszászi and harpsichordist Tom Foster have been exploring the riches of an amazing archive of around 1750 works from the late 17th and early 18th centuries that has miraculously survived all that time in Dresden and is now fully digitised and freely available online. Known as ‘Schrank II’ after the cabinet in which it was stored, it gives the name to their new recording, ‘Cabinet of Wonders’ - also tantalisingly ‘Volume 1’, promising more to come. The composers - Johann Vilsmayr (1663-1722), Gasparo Visconti (1683-1731) and Johann Schreivogel (fl.1707-1749) - will no doubt be unfamiliar, but the music chosen here certainly deserves the title. Vilsmayr’s Partita in E flat major which opens the disc is remarkable, not least for the extreme ‘scordatura’ - where the strings are unusually tuned to create unusual sonorities and harmonic possibilities. The opening Prelude is arresting, with a ghostly sound initially from the violin, leading into a virtuosic Presto with beautifully sweet double-stopping here from Ujszászi. There are two lyrical Arias, the second of which is particularly mournful, then a fabulous Passacaglia is kicked off emphatically by Foster here, with Ujszászi’s rasping unison double-stops (courtesy of that scordatura) reminiscent of the hurdy-gurdy. After a brief Menuett, the Finale is a real improvisatory display, with clever echo effects, and Ujszászi really takes flight here. We then have two Sonatas by Visconti, who was a pupil of Corelli’s. The C minor Sonata is full of complex embellishments, with some oddly unexpected turns in the melodic line. The central movement has lots of stop-start dramatic gestures, whilst the final movement is lilting and graceful, with some unusual chromatic slides in the melody. The F major Sonata has a sweetly straightforward opening movement, and a lightly dancing Allegro to follow. The otherwise delightful Adagio has some slightly odd moments harmonically, but the Finale is captivating - a set of variations on a courtly minuet, with double-stopping mimicking hunting horns. Here again, both Ujszászi and Foster enjoy the opportunity to display their virtuosic command to the full. The three Sonatas here from Swiss-born Schreivogel are perhaps the most polished compositions, with some beautifully lyrical lines for the violin. The crying suspensions in the E minor Sonata’s opening movement, and the melancholic slow movements of the D minor Sonata, with sweet trills and embellishments, stand out in particular. The final Sonata here, the only work not from the ‘cabinet’, is a later work from Schreivogel, demonstrating how the composer’s style developed. Its lyrically operatic central movement is flanked by two fast showpieces, and in the lilting final movement, Ujszászi’s virtuosic string crossing and rapid finger work is highly impressive and a delight to listen to. On the basis of this stunning offering from the Cabinet of Wonders, roll on volume 2! 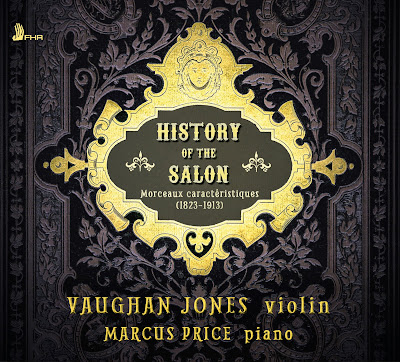 Moving forward a couple of centuries, we enter the world of the 19th century salon for a completely different but equally fascinating collection from Vaughan Jones (violin) and Marcus Price (piano), in ‘History of the Salon — Morceaux caractéristiques (1823-1913)’. Once again, most of the composers here (fourteen in all) will be unfamiliar, apart from one or two. And inevitably, particularly with this genre of essentially pleasing and melodic miniatures, some stand out more than others. So the virtuosic energy and joyful rhythms of the two Mazurkas from Aleksander Zarzycki (1834-1895), and the heart-on-sleeve operatic sentimentality of Alfredo d’Ambrosio’s (1871-1914) Aria perhaps stand out more than, say, the admittedly sweet melody of the otherwise unremarkable Méditation by Joachim Raff (1822-1882), and the pleasing nostalgia but lack of real emotional depth of the Valse Triste from Frank von Vecsey (1893-1935) (the final dedicatee of Sibelius’ Violin Concerto, which he first performed aged 13). But when performed with such commitment and virtuosic flair, as is the case here, even the lightest of offerings is a delight to listen to. There are a couple of more familiar composers here - there’s a sweet operatic Cantibile e Valzer from Paganini (1782-1840), and a lilting Barcarole with a swirling central section from Louis Spohr (1784-1859). And occasionally, the piano accompaniments rise out of the background, such as when imitating the guitar in Moritz Moszkowski’s (1854-1925) Guitarre, and in Jones’ own beautifully atmospheric arrangement of Granados’ (1867-1916) Oriental from his 12 Danzas españolas. Jones’ tone is always sweet, but he avoids sugar overload with lightness of touch and effortless virtuosity when required, such as in Franz Schubert’s (1808-1878) (not that one - a tough break to be a composer with the same name as one of the greatest composers of the time, if not ever, so he became known as ‘François’ Schubert) popular encore piece, L’abeille (The Bee). Listening to the whole collection in one go, there will inevitably be a few casualties in terms of grabbing your attention, but in isolation, each piece is a delight in its own right, affectionately performed here by Jones and Price. 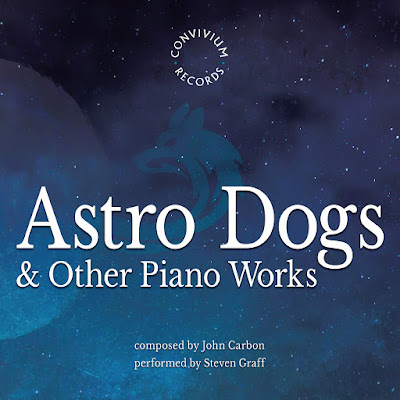 Chicago born pianist Steven Graff has performed and recorded many piano works by fellow Chicago composer John Carbon (b.1951), who I have to say was new to me. On his latest recording, he plays three sets of pieces, the longest, ‘Astro Dogs: 12 Zodiacal Pieces’ giving the disc its title. Before that come two shorter sets, the first of which, Madeleines, inspired by a trip to France with his sister when he was a student. As the name would suggest, these five short pieces are atmospheric, evoking memories and moods. There is a wistful improvisatory, almost Chopinesque feel to the opening ‘Mémoire triste dans un café’, and a darker, more funereal nostalgia in ‘François et ses yeux dangereux’, remembering the death of a boy they had met in Paris. The final piece, ‘Madeleine déteste les devoirs’, on the other hand, has a driving rhythm, with disobediently boisterous hints at children’s songs. The three Impromptus, clearly inspired by the pieces of the same name by Chopin and Schubert in particular, are dreamy and again nostalgia features highly, particularly in the wandering second. The third however is much livelier, with its almost mechanical syncopated dance reminding one of Prokofiev or Kabalevsky. Astro Dogs apparently follows an earlier guitar suite, Astro Cats (of course), and in the drily humorous notes, Carbon explains how each piece connects a particular breed of dog with each of the 12 signs of the zodiac. These are great little character pieces, from the quirky, even eastern-inflected melody of ‘Beagle (Aquarius)’, and the humorous rhythmically uneven ‘goofy gait’ of the ‘Labrador Retriever (Sagittarius)’, to the cartoonishly playful ‘Irish Wolfhound (Aries)’, with its energetic variations on ‘The Irish Washerwoman’ melody. ‘Saint Bernard (Leo) is slow and rhapsodic, whilst hints of Prokofiev return in the prancing ‘Standard Poodle (Libra)’. I’m not sure I get the zodiac references, not being an astrology expert, yet despite being a cat person (I must check out Astro Cats), the characters of the dogs are cleverly portrayed here, and Graff brings this out with great variety of articulation and expression. A great discovery - and always a good sign when a recording of a ‘new’ composer makes me want to seek out more of their music.

(Edited versions of these reviews first appeared in GScene, November 2020)