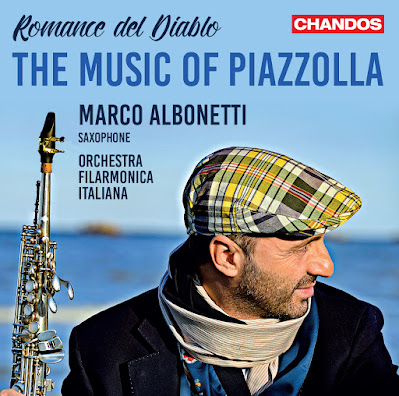 First up this month, a great new disc of works by Astor Piazzolla (1921-1992). Piazzolla brought the music of the ‘Nuevo tango’ to concert platforms, and is responsible for its wider exposure outside Argentina. HIs music has been performed in many guises, and here, Italian saxophonist Marco Albonetti plays a selection of his works along with the Orchestra Filarmonica Italiana. Most of the works here are arranged and orchestrated by Albonetti, and his sensitive interpretations demonstrate how well the saxophone (mostly the soprano instrument) is suited to taking the role of the bandonéon (a kind of concertina, and Piazzolla’s own instrument). Piazzolla used a musical motif for ‘Diablo’ (as well as one for ‘Angel’) in numerous pieces, and the title track, Romance del Diablo is sensuous and intimate, with the devil definitely in seduction mode here. Albonetti plays with aching melancholy, and the orchestral playing is sumptuous throughout. Spread across the disc are Las Cuatro Estaciones Porteñas (The Four Seasons of Buenos Aires), in which several soloists from the orchestra get the chance to shine (Cesare Carretta (violin), Alessandra Gelfini (piano), and Virgilio Monti (double-bass)). There are some great percussive effects in Autumn, and dark, sensuous rumblings in Winter, along with virtuosic interludes from the piano and sax. There’s more virtuosity in Spring, as well as driving rhythms, and the duet between sax and double-bass gets wilder and wilder at the conclusion. Summer is lively, with pulsing pizzicato strings beneath the sax solo, before the sliding double-bass builds the tempo, to a final scream from the sax to finish. For Años de Soledad (Years of Solitude), Albonetti ups the melancholic ante by switching to the baritone sax, and the warm tones, contrasted with the jabbing orchestral tango rhythm, make this a highlight of the disc for me. Two of Piazzolla’s most well-known works are here too. Oblivion is preceded with a solo sax improvisation over a pulsing double-bass heartbeat, before the slow, melancholic milonga tune takes over, with evocative inflections in the melodic line from Albonetti. The disc ends with Libertango, and once this gets going, the sax repeats its hypnotic, twisting motif over the piano and bass stamping out the tango rhythm. I’ve heard interpretations with greater abandon here, but Albonetti and the players are certainly captivating to listen to. Reinterpretations of Piazzolla can sometimes be a little clinical in trying to replicate a particular sound and style – not so here, as Albonetti has clearly fully absorbed this music, making for a disc full of life and romance. 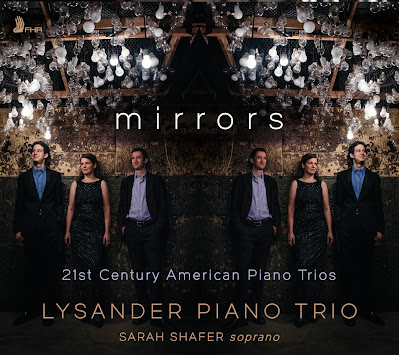 The American Lysander Piano Trio mark their tenth anniversary with a collection of premieres of works they have commissioned and collaborated on with living American composers. There are works here from six composers, and the opening work, Around the Cauldron by Gilad Cohen (b.1980) has seven short movements depicting scenes inspired by the three witches in Macbeth. Cohen particularly exploits the high registers of the three instruments for ‘witchy’ effect, and there’s lots of twisting and turning, with the violin and cello lines often colliding. Hand-stopped piano strings evoke an electric bass, and there’s lots of glassy string effects too. Reinaldo Moya’s (b.1984) Ghostwritten Variations take inspiration from fictional composers from four novels, including Mann’s Doctor Faustus, imagining what those composers might sound like. Moya makes great use of turbulent perpetual motion, as well as reverberation effects from repeated, pulsing chords. In the final variation, from Kim Stanley Robinson’s The Memory of Whiteness, the ghostly high piano ripples against glassy sustained string chords are particularly striking, as are the tolling, low piano ‘bells’ towards the end. For Jennifer Higdon’s (b.2013) Love Sweet, the trio are joined by soprano Sarah Shafer for a set of five songs following the trajectory of a relationship from birth to death. Shafer has a bright, incisive tone, and expresses the changing moods well here, from the sprightly opening ‘Apology’, through the ominous, even disturbing atmosphere of ‘Absence’ (with insistent knocking from stopped piano strings), the elegiac and intense ‘A Gift’ with its strange chromatic harmonies, to the painful end in ‘A Fixed Idea’, with more stopped piano strings, lurking low and torturing in their repetition. They return to Shakespeare for Sofia Belimova’s (b.2000) Titania and Her Suite, and in this delightful miniature, the piano ripples and the violin delicately tweets like a bird. A wild dance builds, with all three players bumping into each other rhythmically, and the result is a beautifully light and wispy confection. William David Cooper (b.1986) turns to Psalm 137 for An den Wassern zu Babel, with the cello introducing the falling, expressive lament. Cooper exploits the lyrical potential of the string instruments here, and as the music develops, there are some highly dramatic sweeps, with a sense of frenzy building through the fifth of the variations here, and the music then drives through the final variation to an almost violent conclusion. Jakub Ciupinski’s (b.1981) The Black Mirror concludes the disc, with some incredibly evocative and effective writing. He creates a ‘seagull’ effect with glissandi (slides) on harmonics, and there are hints of Pärt in the rising and falling lines beneath shifting harmonies. As the intensity builds, the ‘seagulls’ swoop around piano chords, then the strings wind around in repeating, minimalist patterns, leading to a dramatic final bell-like section. The Lysander Piano Trio demonstrate exceptional virtuosic and expressive talent across this diverse selection of styles, thus creating an excellent showcase for all six composers, and their 10thanniversary – Happy Birthday! 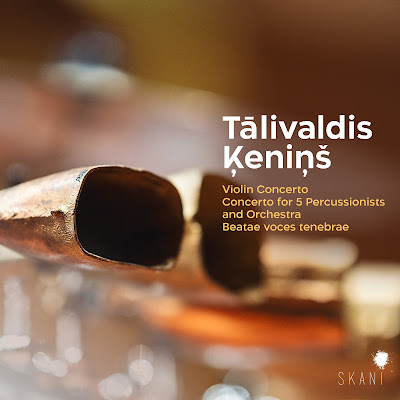 And finally, off to Latvia, via Canada. Tālivaldis Ķeniņš (1919-2008) left Latvia following Soviet occupation after World War Two, emigrating to Canada in 1951. Prior to going to Canada, he lived and studied in Paris. He composed eight symphonies and twelve concertos, as well chamber, piano and choral works. Despite being one of Canada’s most performed composers, few works have been recorded. So the Latvian National Symphony Orchestra, conducted by Andris Poga, are rectifying that, with a disc of three works, his Violin Concerto, his Concerto for Five Percussionists and Orchestra, and the single movement orchestral piece, Beatae voces tenebrae. His music combines a certain romanticism with the neoclassicism of his French training, and it is a fascinating mix of lean, often angular counterpoint with lyrically striking melody. In the Violin Concerto, performed here impressively and with conviction by Latvian violinist Eva Bindere, the spiky, virtuosic lines, over often sparse and brittle orchestral accompaniment contrast with expressive falling and rising lines in the slow movement. Ķeniņš makes sparse use of woodwind, but there is a ghostly bassoon solo, and the brass and percussion are used to ominous effect in the Scherzo. An extended cadenza begins the finale, with an essentially lyrical if highly chromatic line ornamented with trills and leaps, and percussion and racing strings herald a race to the finish. The Concerto for Five Percussionists and Orchestra, performed here by members of Perpetuum Ritmico, is highly dramatic, as one would expect. A live performance would carry the added benefit of the visual, as a dazzling array of percussion instruments are made use of here (not all of which I could identify aurally). In the dramatic opening movement, there are crashes and knocks from cymbals, woodblock and gong, as well as queasy tuning slides on the timpani. In the first slow movement, tuned percussion is used to great atmospheric effect, with muted trumpets and another mournful bassoon solo. After a brief faster section, the train slows down into a second slow movement, with muted strings lamenting and constant knocking and rattling in the background. The final movement returns to high drama, with crashing drums, sliding drums and even a siren for a wild finish. To conclude the disc, Beatae voces tenebrae is a mixture of serene calm and anguish of grief – it was written after the sudden death of two close friends, but also possibly commemorated the 100thbirthday of his mother, as well as ‘deported loved ones’, victims of the occupation. He draws extensively on the four-note B-A-C-H motif, as well as works by Bach, such as the downward movement in the Crucifixus of the B minor Mass. There are also references to Liszt and Beethoven, as well as the harp’s perpetual motion from In Paradisum from Fauré’s Requiem. From a low, rumbling opening and an initial slow rhythmic pace, Ķeniņš gradually builds tension, with moments of true anguish from the strings, and some strange effects from the horns. The Fauré effect at the end brings calm, although the percussion continues to knock away disconcertingly in the background, before the harp rises into nothingness at the end. A fascinating window into a new composer for me, and one I will definitely want to explore further.

(Edited versions of these reviews first appeared in Scene, February 2021)