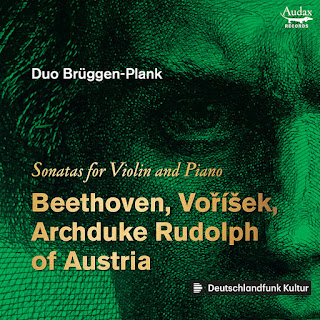 The Duo Brüggen-Plank are the German pianist Henrike Brüggen, and the Austrian violinist, Marie Radauer-Plank. For their first recording with Audax, they have decided to place the last of Beethoven’s violin sonatas – the Sonata No. 10, Op. 96 – alongside a Sonata in the same key, Op. 5, composed by Jan Václav Hugo Voříšek (1791-1825). Twenty one years younger than Beethoven, Voříšek was one of the main candidates seen as successor in Vienna to the older man, although he actually died two years earlier than him at just 34 years old. Both works were dedicated to Archduke Rudolph of Austria (1788-1831), a great musical patron, and piano pupil of Beethoven, and the Duo also include a Sonata by him here too. The Beethoven Sonata is beautifully calm, yet no less challenging for that. The first movement is full of delicate conversation between the two instruments, and here, Radauer-Plank’s sweet tone is matched by beautifully warm and smooth runs in the piano part. Brüggen then gently opens the second movement with its hymn-like idea, with the violin joining in with a rocking countermelody. The instruments remain at rhythmic odds, and Radauer-Plank’s liquid playing is balanced well, with Brüggen avoiding getting bogged down by the thick textures. The brief Scherzo dances by, before the final set of variations on a cheerful theme. Here again, the Duo balance the textures well, with material passing back and forth between the instruments. In the fifth variation, the violin has throbbing chords over which the piano’s rhapsody is as if improvised, and Brüggen achieves this sense well, soon matched by Radauer-Plank as they swap roles. The Voříšek Sonata is very different in atmosphere, right from its mysterious, dramatic opening leading into a totally contrasting galloping Allegro. The movement is bright and melodically inventive, and Radauer-Plank is particularly sweet at the top of the range. An energetic, scampering Scherzo follows, with sudden halts and interesting rhythms. With hints of humour in the playful slow-up at the end of the middle section, the delicate, quiet conclusion is unexpected, swept away by final emphatic chords. The slow movement is somewhat unsettling, with low, gently pulsing rumbles from the piano, over which the lyrical violin melody rises serenely. The finale is perhaps where Voříšek’s weaker invention shows up the most – less melodically inventive, with expected harmonies on the whole – yet it brings proceedings to a fun conclusion overall. The Archduke’s Sonata again has a dark, turbulent opening, soon swept away by a virtuosic, ebullient Allegro, with a rippling piano part. There’s not a huge amount of imaginative development here, yet the Duo make the most here of the rapid exchange of ideas between the instruments. The slow movement that follows, however, is expressive and heartfelt, with freer invention and harmonies that rock back and forth. Brüggen’s piano textures are warm and rich here, and the Duo find a perfect nostalgic sweetness. The Minuet and its two Trios is playful if not particularly revolutionary, but the finale is great fun, with flourishes of fantasia-like piano episodes between returns of the punchy theme. The Duo set off at a pace, and play with great drive and energy, with some blistering playing from both in the final gallop. Ultimately, neither of these works can compete with Beethoven’s ethereal calmness, but they have much to offer nonetheless, especially given these highly engaging performances. 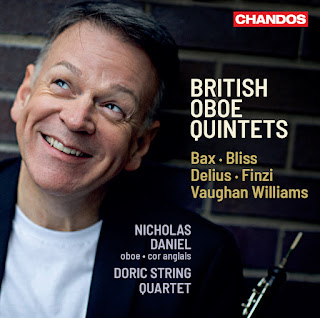 The wonderful Doric String Quartet have joined forces with oboist Nicholas Daniel for a glorious collection of British Oboe Quintets. They open with Arnold Bax’s (1883-1953) Quintet. Like most of the works here, this was written for the great oboist Leon Goossens. After a warm string opening, the oboe launches into a winding, sensuous melodic line, and immediately the warmth and incredible smoothness of Daniel’s tone is apparent. After a more urgent central section, some magical muted string playing from the Dorics restores calm. The middle movement’s quiet, folk-like melody emerges on the violin over rich harmonies. The oboe eventually enters, darkly improvisatory, and with uneasy string textures, Daniel’s effortless birdlike melismatic lines soar. A joyful jig concludes proceedings, with oboe and violin taking turns, and the pizzicato strings having great fun here. The harmonies get darker and more unsettled, however, and calm is never quite convincingly restored, despite the flourish to finish. Next comes Gerald Finzi’s (1901-1956) single movement Interlude. This for me is the highlight here – Daniel and the Dorics capture perfectly Finzi’s darkly introspective and nostalgic mood, right from the atmospheric string opening. As with much of Finzi’s instrumental music, there is an expressiveness that occasionally breaks the surface with full passion, but the lid always goes back on, and the players judge this perfectly here, allowing the music to ebb and flow. The final pulsing bars under the high sustained violin are enchanting. For somewhat lighter relief, they follow this with Vaughan Williams’ (1872-1958) Six Studies in English Folksong, originally for cello and piano, but here in Robert Stanton’s 1983 arrangement for cor anglais and string quartet. All using original folksong tunes, they allow Daniel to shine on the mellow cor anglais, and by and large, the strings play a supporting role. Aside from the last of the set, they are all quite leisurely, with Vaughan Williams’ trademark strolling rhythms. Daniel plays with an open simplicity, allowing the tunes to speak for themselves, before they all then play with the final spiky jig, before even that dies away to nothing. Then to Arthur Bliss’ (1891-1975) Oboe Quintet. An intriguingly mysterious violin duet sets the tone for a darkly uneasy opening movement. After an intense, faster central section, jittery violin textures and the winding inflections of the oboe add to the sense of unease. In the slow movement, Daniel’s long sustained oboe lines are incredibly even, all the more impressive given the slithery string chords shifting beneath. Tremolo strings then increase the intensity as the harmonies darken, and following a folksy interruption with strumming cello, peace returns for a quiet ending. The finale by contrast has immediate driving string energy, and the oboe picks up the pecking, virtuosic material as they lead into the jig – Connelly’s Jig to be specific. The playful dance is dovetailed with the darker opening energy, and the Dorics give an edge to their string playing as things get wilder, almost chaotic. After a brief quieter section with pizzicato strings and fragments of melody passed around, there is a frenetic coda to finish, topped by a spiky flourish from the oboe. The disc concludes with two arrangements by Eric Fenby for Goossens of Two Interludes from Frederick Delius’ (1862-1934) final (and unsuccessful) opera, Fennimore and Gerda. Here, Daniel is privileged to play Goossens own instrument, and the tone here is noticeably different, with a warm quavering vibrato and open resonance. Both Interludes are gentle and expressive, with Daniel again demonstrating those lyrically expressive long lines, particularly in the serene second Interlude. All in all, this is a very special recording of some glorious music, and Daniel and the Doric String Quartet excel throughout. 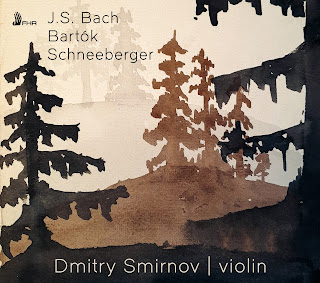 Russian violinist Dmitry Smirnov has paired Bartók’s (1881-1945) Sonata for Solo Violin with Bach’s Partita No. 2 for his debut recording with First Hand Records. He has performed both works together live, interspersing the movements, but here they appear separately – although of course you could experiment with playing the tracks in a different order. There is a kind of logic to this – it’s hard for any solo violin sonata not to have some heritage line back to Bach, and Bartók’s opening movement, written in the style of a chaconne, although not strictly following its form, links with the final great Chaconne of Bach’s Partita. Bartók composed his Sonata for Yehudi Menuhin in 1944, and of course it is highly virtuosic, with fiendish scale passages, use of harmonics and rapid trilling. Smirnov is darkly evocative in the opening movement, with great dynamic contrasts, and an eerily quiet slither towards the movement’s conclusion. Dynamics are key in the second movement’s spiky fugue, and Smirnov expertly brings out the contrast between the different fugal lines. He then deftly winds the spooky melody of the third movement through the full range of the instrument, ending with wasp-like trilling, leading to the buzzing idea of the finale. This is contrasted with a more playful idea, and Smirnov changes the mood well for this, leading to the slightly incongruous solidly tonal conclusion. Smirnov’s Bach took me a little while to get used to, however. It is quick, especially the final Chaconne, and while you can’t argue with the incredible virtuosity he demonstrates, occasionally these rapid tempi lead to a tendency for elements to feel a little throwaway. The Sarabande, for example, has a lightness which misses a certain gravitas. However, his tone is smoothly resonant, and he brings out the melody from amongst the multiple stopped chords here. The overall approach is light, even playful, as in his delicate ornamentation in the Allemande. Again, he brings that lightness to the final mammoth Chaconne. As a result, it doesn’t have the profundity of some performances, and yet the mesmerizing arpeggios and whirlwind runs are highly impressive, and it is a refreshing contrast to many weightier interpretations out there. He then concludes his disc with a Sonata for Solo Violin by the Swiss composer Hansheinz Schneeberger (1926-2019), with whom Smirnov studied in his final years. Schneeberger was a highly successful violinist, and he premiered Bartók’s Violin Concerto No. 1, as well as recording Bach’s Solo Sonatas & Partitas. So there is a clear line here, and one can hear the influence of both composers in his Sonata here. Following a cadenza-like emphatic opening, the highly virtuosic material winds and twists, with some highly lyrical moments too – Smirnov’s tone here is beautifully sweet. Throughout the work, chromatic ideas slide, defying harmonic clarity, and yet there are also occasional flashes of diatonic brilliance, particularly in the central Allegro. The final movement’s constant movement is given a flowing energy by Smirnov, and he judges well the increasing pauses in motion towards the end, as if the whole thing is winding down, to the final major cadence. An effective work, performed here with great precision and virtuosity, bringing Smirnov’s display to a strong conclusion.

(Edited versions of these reviews first appeared in Scene, October 2021)