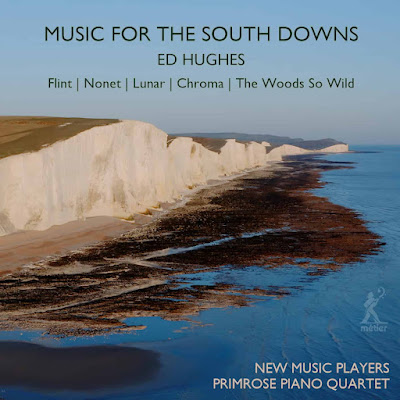 You may have caught Cesca Eaton’s film, Cuckmere: A Portrait back in the 2018 Brighton Festival, shown with a live score by Lewes-based composer Ed Hughes (b.1968) (I reviewed the recording of his score here back in April 2020). The local landscape continues to be an inspiration for his music, and his latest recording is titled Music for the South Downs. Once again there is a film connection – in 2021, Hughes was commissioned by the South Downs National Park Authority to provide a score for a film by Sam Moore celebrating the National Park’s 10th anniversary. This music formed the first movement of his Nonet, here in full, and you can view the film below or here. The Nonet is in three movements, for strings, flute, clarinet, horn, trumpet and piano, performed here by the New Music Players. The opening movement is obviously filmic, with a pastoral flow, gently pulsing brass and rippling violins creating a sense of calm motion. There is a slight sense of ease in the second movement, despite its Tranquil marking, with its use of repeated notes like slightly agitated birdsong, and the atmosphere darkens as the movement progresses. Flowing motion returns in the final movement, with minimalist repletion of figures burbling below slow moving lines, and pulsing chords in the piano part. This combination of steady momentum and lyrical atmosphere runs through the other works here too, with more immediate energy and swirling repletion in the opening movement of Flint, for example – requiring deft precision from the New Music Players. The Sussex landscape is here again, as well as a connection to a Sussex folk song transcribed by George Butterworth in 1912, which inspired the central slow movement. Its tonal lyricism is interrupted with occasional jarring interjections by the violin, disturbing the otherwise gentle calm. Unease is more prevalent in the final movement, with tonal themes trying to burst through the increasingly chromatic turbulence. The two studies, Lunar I & Lunar II were inspired by Isamu Noguchi’s sculptures, exhibited at the Barbican in 2021. There is a lilt to the first study, with lyrical lines weaving around darker harmonies, and the lilting triple time of the second study is put against insistent arpeggios, and swirling, rising flute lines, finally subdued for its quiet ending. Chroma is a single movement work for just strings, and Hughes makes great use of sudden dynamic changes to shift the energy here, from unsettled, quiet rumblings to insistent repeated rocking between chords, with a perpetual motion running beneath in the violins. The final work here, The Woods so Wild, is for piano quartet, and is performed by the Primrose Piano Quartet. The title comes from a Tudor song, ‘Will Yow Walke the Woods soe Wylde’, which also inspired Byrd and Gibbons to write variations, as well as Dowland, who quotes the tune in his ‘Can She Excuse My Wrongs?’. Hughes’ piece explores the consolation provided by the landscape around us, and he began writing it during lockdown. There is a definite sense of consolation in the rippling piano part of the opening movement, with gentle string lines above. Hughes makes use of rich low piano textures in the middle movement, and the final movement has a rolling triple time, with tricky cross-rhythms and pulsing energy. There are strong performances throughout here, and Hughes’ music is always stimulating and full of contrast. Despite being largely landscape-inspired, he never gets stuck in creating a single pastoral atmosphere – there is a constant sense of life, movement and vibrant change here. 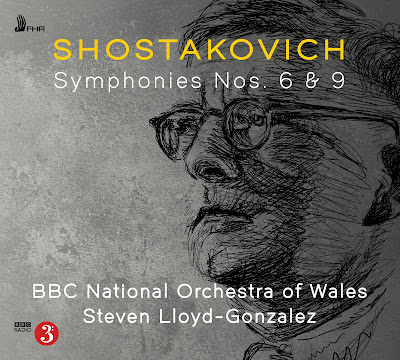 And now for two Shostakovich Symphonies from the BBC National Orchestra of Wales, conducted by Steven Lloyd-Gonzalez. Dmitri Shostakovich’s (1906-1975) Symphony No. 6, following the success of the fifth, promised originally a large-scale setting of a poem about Lenin, but in the event the symphony that he produced was purely instrumental. The structure is also unusual, with a weighty opening slow movement taking up more than half of its duration, followed by two relatively short, faster movements. The moods are also highly contrasting. The Largo has a searing opening with brooding strings, and a keening flute, and instantly here the BBC NOW strings present an intense sound, achieving a sense of sadness without tipping over into a harshness of tone. Lloyd-Gonzalez expertly steers the orchestra through this momentous movement, and the climax is full of heartfelt intensity. The contrast with the second movement couldn’t be stronger, with a tumbling clarinet leading into capering strings, with shrill woodwind outbursts, and here it is the BBC NOW woodwind players turn to shine, with adept playing throughout, particularly from the bassoons. The finale sets off at a gallop, and dances along, leading to a bright, humorously crashing finish. Written in 1945, again, Shostakovich had trailed a different narrative for Symphony No. 9, that this would be a celebration of Soviet victory over the Nazis. But what transpired was altogether more complex, its neo-classical humour certainly not overtly heroic. It opens in playful mood, with bustling strings against a sardonic piccolo theme, and punchy brass. Lloyd-Gonzalez keeps the insistent repetition motoring along to the end, and this is followed by a much more plaintive mood in the second movement, with a tentatively mournful clarinet solo followed by gently throbbing strings, and a lumbering rhythm. A typically Shostakovich gallop follows, with bright woodwind and precise articulation from the strings here. Not for the first time in this recording, the bassoon impresses, with a touching solo from Joshua Wilson. The finale has a building sense of energy, and the BBC NOW strings avoid their picky textures becoming too short. Lloyd-Gonzalez drives the momentum to the emphatic full orchestral climax, and a fiendishly galloping coda brings things to a lively end. These are strong performances of these two tricky symphonies, and I look forward to seeing more from Lloyd-Gonzalez.

(Edited versions of these reviews first appeared in Scene, July 2022)