Time to catch up on the rest of events from Week 1 of this year's Brighton Festival. 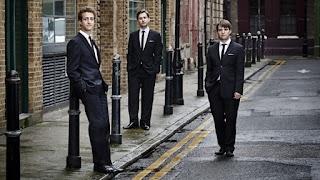 The Busch Ensemble consists of Mathieu van Bellen (violin), Jonathan Bloxham (cello) and Omri Epstein (piano).  They performed Mozart's Piano Trio in C major K548, Josef Suk's Elegie Op. 23, and Brahms' Piano Trio in C minor Op. 101 in their lunchtime concert (Wednesday 8 May, Studio Theatre). In the Mozart, it is the piano that largely takes centre stage, although the cello gets more of a starring role in the slow movement, with a solo melody in the upper registers.  The finale is a lively rondo, with all players enjoying the chase.  I felt that Epstein took a little while to settle into the running scale passages of the first movement, but once relaxed in, this was an enjoyable performance, with Bloxham enjoying his lyrical solo in the slow movement.  By the finale, these young players had definitely arrived, and they finished with engaging confidence.  Suk's Elegie Op. 23 was originally composed for solo violin and cello, string quartet, harmonium and harp, but the composer also arranged it for piano trio, as we heard here.  The violin opens with the wistful, lyrical melody, which the cello repeats with the violin in counterpoint.  The piano largely provides chordal accompaniment, although has more to do in the two dramatic middle sections.  The mysterioso coda brings this delightful miniature to a close.  The Busch Ensemble gave a convincing performance here, although I would have liked a warmer violin tone - although to be fair, this is largely down to the dry acoustic of the Studio Theatre.  However, the overall tone of the ensemble warmed considerably for a very strong performance of the Brahms.  Here the players relished the way in which Brahms plays with cross rhythms and hemiolas, particularly in the finale, which had real drive.  This is pure, intense late Brahms, and the Busch Ensemble really got to the tragic, romantic core of this music for me.  Brahms attempts to wipe this all away with a C major finish, but we are left unconvinced.  We were treated to a delightful performance of the Scherzo from Mendelssohn's Piano Trio No. 1 in D minor, Op. 49 as an encore.  I look forward to hearing more from this ensemble in the future. 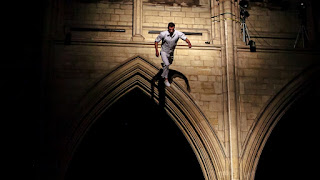 Vocal ensemble I Fagiolini, directed by Robert Hollingworth joined forces with Brisbane based circus performance group Circa, directed by Yaron Lifschitz for an innovative performance piece, How Like and Angel.  This took place in All Saints Church in Hove (Tuesday 7 - Friday 10 May), stripped of its seating and sparsely lit, using two main stage areas at either end of the church.  Segments from the six circus performers of acrobatics, tumbling and balance were interspersed with and overlapped with performances by I Fagiolini of an impressively wide range of repertoire.  We heard Tallis, Josquin and Victoria, all beautifully performed (particularly the Victoria for me), but there were also contemporary pieces from Roderick Williams and Adrian Williams, as well as the beautiful Dialogue from French composer Daniel-Lesur (1908-2002).  One of the sopranos (I think Anna Crookes, but there was no credit in the programme) gave an impressive performance of Hildegard of Bingen's O
viridissima virga - and this was the one time when the singers and circus performers came together, with Crookes interacting with two of the female performers.  This was an incredibly captivating show, although my one criticism would be that the linkage between the two forms was not always apparent (apart from in the Hildegard).  Most of the time, we moved from listening to watching, or the music provided a backdrop to the circus, but I wasn't entirely convinced there was a coherently integrated narrative.  Having said that, I was entranced, and the whole audience had their hearts in their mouths as we watched one performer climb the height of the church to the clerestory with just a rope, and then proceed to free fall to the ground (onto a mat!).  Oh, and I Fagiolini's performance of the South African song Umsindisi, whilst moving their way through the audience must be the only time I have heard a white vocal ensemble sound convincing singing South African songs (but then I'm not South African - others may disagree).  A great performance all round, which has rightly garnered rave reviews.

Mezzo-soprano Anna Huntley and tenor Nick Pritchard were joined by Simon Lepper on piano for a recital of music by Benjamin Britten for their lunchtime concert on Thursday 9 May.  They began with four of Britten's arrangements of songs by Purcell - two duets and a solo song a piece.  Following the formality of the opening, well-known Sound the Trumpet, Nick Pritchard immediately showed some of the excellent characterisation both singers would demonstrate throughout their recital in Man is for the Woman Made.  They then performed a Britten set each - Pritchard took the Thomas Hardy settings, Winter Words, and Anna Huntley performed A Charm of Lullabies, dedicated by Britten to the mezzo-soprano Nancy Evans.  From these sets, the highlights for me were The Choirmaster's Burial and Before Life and After from the Hardy set, both somehow capturing a sense of poignancy and regret, and Sephestia's Lullaby, a setting of Robert Greene from A Charm of Lullabies.  Once again, this song shows how Britten expertly conveys the world between sadness and joy in his bitter-sweet harmonies.  Both singers relished these, and their ability to create a world of real characters within each short song was impressive.  They finished with a set of folk song arrangements.  Sharing the lines between them worked well, and they finished with well-played humour in The Deaf Woman's Courtship, written for Pears and Kathleen Ferrier to perform.  A swift encore of the old favourite, Oliver Cromwell concluded an excellent programme. 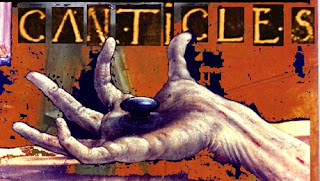 Another example of combining art forms next, with a staging of Britten's Canticles.  Directors Neil Bartlett and Paule Constable used a very sparse Theatre Royal, with the bare building revealed, limited props and minimal lighting.  The five Canticles were then given a range of treatments, using dancers, actors, film and lighting to enhance Britten's score.  The first thing to say about this was that the musical performances were absolutely faultless, and often spellbinding.  Tenor Ian Bostridge and counter-tenor Iestyn Davies in Canticle II, facing and singing into the piano, created the most wonderful blended, eery and appropriately disturbing sound, and when joined by baritone Benedict Nelson in Canticle IV, the three singers performed Britten's perfect setting of T S Eliot's words in a totally captivating way.  And in a way, herein lay the problem with this for me - the musical performances were so perfect and absorbing that there was little need for anything additional, and much of the staging actually created distraction rather than any new dimension.  That said, the film backdrop for Canticle III, with scenes of bombing raids interspersed with Passion paintings, was inspired, and because it was directly behind the performers did not unduly shift focus.  The two dancers in Canticle II explored the ambiguous and often disturbing father/son relationship in an interesting way.  But the acted out breakfast scene in Canticle I, and the loan spinning dancer in Canticle V added little for me.  Perhaps for some the music may be a little inaccessible, particularly on first hearing, so maybe the added visual aspects provided an in to the sound world for those unfamiliar.  Nevertheless, I wouldn't have missed this performance for the world.  Ian Bostridge in particular was clearly in his element, with Iestyn Davies and Benedict Nelson equally impressive, but Julius Drake also deserves special mention for his piano accompaniment in Canticles I-IV, as do Richard Watkins (horn - Canticle III) and Sally Pryce (harp - Canticle V). 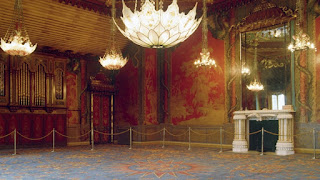 On Friday 10 May, the Nash Ensemble were in the Music Room of the Royal Pavilion.  Their original programme was to explore the music of several composers who had been incarcerated in the notorious concentration camp at Theresienstadt, now known as Terezín, and who were later murdered at Auschwitz.  Sadly, one of the ensemble's members, Marianne Thorsen had to withdraw at short notice for family reasons.  She was replaced by violinist Krysia Osostowicz, but unfortunately this understandably required some programme changes.  The rest of the line-up was the same - Ian Brown (piano), Richard Lester (cello) and Philip Dukes (viola).  In the second half, they performed the Dvořák Piano Quartet No. 2 in E flat major as planned, and pianist Ian Brown also performed the Pavel Haas (1899-1944) Suite for solo piano.  Sadly, pieces by Gideon Klein (1919-45) and Hans Krása (1895-1944) had to be replaced - instead, the ensemble performed the Schumann Piano Quartet in E flat major, Op. 47.  However, once I'd adjusted to the disappointment of the programme change, this proved to be a wonderful evening of chamber music in the wonderful, over the top and slightly preposterous Music Room.  The Schumann is always a joy to hear, often overlooked in favour of the better known Piano Quintet.  The cello in particular has a starring role, especially in the third slow movement, and Richard Lester took advantage of the beautiful melody here.  Haas' Suite for solo piano is a fascinating piece, with definite shades of Bartók.  The interplay of rhythm and spiky dissonance makes this an enjoyable performance piece, and Brown definitely had fun with it.  However, the Dvořák stood out for me as the most enjoyable, and the four players really seemed to relish the music here.  Weightier than his first Piano Quartet, Dvořák like Schumann gives the cello a beautiful lyrical solo in the slow movement.  And despite the majority of the finale being in the minor key, Dvořák finishes on a high with an exuberant end in the major, which the Nash Ensemble clearly enjoyed, as did the audience.