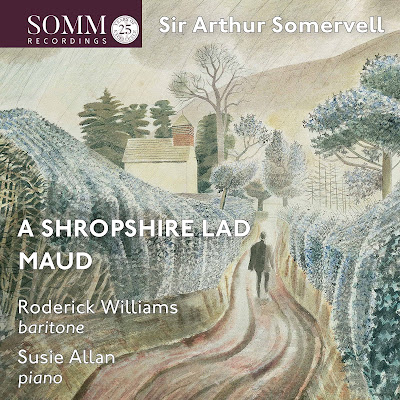 Sir Arthur Somervell (1863-1937) studied with Stanford and then Parry at the Royal College of Music, where he subsequently became a professor. He composed some orchestral and choral works, the latter of which achieved some success during his lifetime, but he is now chiefly known for his impact on the development of English art song, following on from his teachers. Baritone Roderick Williams, joined by his regular pianist partner Susie Allan, has recorded two of Somervell’s most significant song cycles, Maud and A Shropshire Lad, settings of Tennyson and A E Housman respectively. It’s hard to avoid comparing the settings of poems from A Shropshire Lad with those of other composers, notably Vaughan Williams, Ireland, Gurney and Butterworth – but to be fair, Somervell was there first, setting ten of the 63 poems from A E Housman’s collection less than ten years after they were first published. His settings are on the whole more straightforward than some of the later composers, and in the liner notes, Williams discusses Somervell’s lack of focus on any subtext in the poems, taking the texts largely on face value. As such, they give a faithfully atmospheric reading of a young man, moving through early heartbreak and loss, ultimately finding redemption in heading off to fight and ‘die in glory’. The ‘Loveliest of trees’, when the 20 year-old man wistfully reflects that he has ‘only’ fifty years of his threescore years and ten ahead of him, followed by the youthful sentimentality of ‘When I was one-and-twenty’, before a darker bitterness of lost love creeps in in ‘There pass the careless people’. There are hints of darkness in amongst the church bells tolling in ‘In summertime on Bredon’, as the man’s young wife dies, and in his rather self-centred bitterness he admonishes her for leaving and not waiting for him, and the return to the major key for the final verse is not entirely convincing. So it’s off to war, and there is little hint of the premonitions of horrors to come we find in other settings, particularly Butterworth’s, with Somervell perhaps taking rather literally the suggestion to ‘Think no more, lad, laugh, be jolly’ – after all, ‘ ‘tis only thinking lays lads underground’. There is a moment of fragility in the penultimate ‘Into my heart an air that kills’, as the singer wavers on a single repeated note as the piano recalls the opening song. But ‘The lads in their hundreds’, that in other hands is so poignant, here leaves one slightly uncomfortable, the unexpected modulation at the end of the third verse, and the knowledge that the men will not return, swept away with the final verse’s heroic blaze of glory. Williams is true to his word, and delivers the cycle with a clear and unfussy approach, allowing Somervell’s approach to the text to speak for itself without any overdramatic sentimentality. Whilst I’m left a little underwhelmed by Somervell’s settings here, the same cannot be said of his Tennyson saga, Maud. A much more dramatic tale, full of unspoken mental torment and disturbing emotions, Somervell’s setting here is much more expressive and full of interest, without straying too far into Victorian melodrama. We’re taken from the protagonist’s father’s suicide, through his growing love, infatuation and obsession for Maud, climaxing in a duel, in which our ‘hero’ kills her brother, and then wracked with torment, is driven mad, before (once again) finding some sort of redemption in going to war, hoping for reunion with Maud in death. Also striking here is the complexity of the piano accompaniments, with Schumannesque rippling textures, ringing bells, funeral marching and echoes of the church organ. Allan is impressive throughout, and Williams once again delivers the narrative with clarity, here bringing out the greater range of dramatic expression. The darker undercurrents are brought out here too – the growing obsession in ‘Maud has a garden’ surely borders on stalking, and Williams’ intensity of delivery, over the watery expressive accompaniment, is quite disturbing. There is fragility in the world-weariness of the final song, ‘My life has crept so long’, and it is left to the piano to introduce a more heroic style, the singer almost dragged along unwillingly to the final conclusion. Two other short songs are added to the programme here. ‘A Kingdom by the Sea’, a setting of Poe, has a touching, almost childlike simplicity in its lilting rhythm, another tale of lost love, with Williams placing the high ‘tomb’ with impressive delicacy. And the ‘Shepherd’s Cradle Song’, with its similarly simple lilt, gains interest from the piano part weaving beneath the pastoral melody. Whilst this disc might not convince us that Somervell is an unfairly forgotten genius, the Maud cycle alone, and Williams and Allan’s strong performances throughout make this well worth exploration. 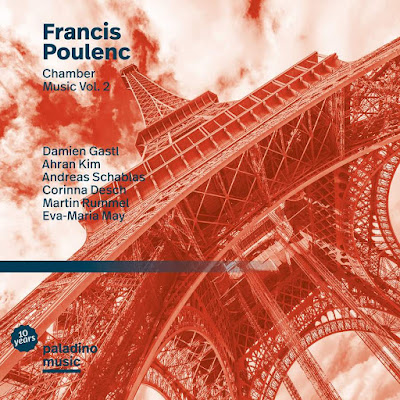 Francis Poulenc (1899-1963) is one of those composers with a completely individual voice, yet it is hard to pin down exactly what makes this so. It is perhaps the slightly incongruous mixture of French cabaret, with elements of the sacred choral traditions, with some gorgeous chromatic harmonies thrown in. So it is always a pleasure to find new recordings of his music, especially including works I’ve not come across before. Pianist Eva-Maria May has been recording his piano music, and kicking off her second collection of chamber music, she is joined by cellist Martin Rummel for the Suite française d’après Claude Gervaise. Gervaise was a French Renaissance composer, and this suite was originally an orchestral suite, which Poulenc revised for cello and piano. It is a straightforward collection of dance inspired movements, alternating fast and slow, with Poulenc’s characteristic take on an ‘ancient’ style. There are beautifully lyrical lines for the cello in the slower movements particularly, and the resonant recording and Rummel’s rich tone give these extra warmth. Poulenc throws in some typical harmonic piquancy in the harmonic clashes between the cello line and the piano, particularly in the slow Pavane, and the swirling repetitive figures in the bright concluding Carillon are highly effective. They follow this with a transcription by cellist Maurice Gendron of Sérénade, from Poulenc’s song cycle, Chansons gaillardes, with its gently lilting sicilienne rhythm and beautifully lyrical melody. Next comes music for the stage – music to go with a play by Jean Anouilh, the comedy L’invitation au château. This forms in effect another Suite, for violin (Corinna Desch), clarinet (Andreas Schablas) and piano. The music is great fun, with swirling waltzes, balletic and circus-like capers, the odd polka and tango thrown in, as well as snippets of a Chopin-esque mazurka. Nothing lasts for more than a minute or two, and without the context of the play, it’s difficult in places to make sense of the transitions, but mixture of cabaret, nostalgia, comedic antics and swirling waltzes is hard to resist. All three players here relish the lyrical melodies, balletic leaps and luscious harmonies. Flautist Ahran Kim joins for two pieces – firstly a solo, Un jouer de flute berce les ruines, the manuscript of which was only discovered in 1997. Again, the reverberant recording adds to Kim’s smooth sound in this brief but beautiful, twisting and turning melody. She follows this with another brief piece, this time an introspective, intimate work for piccolo and piano, Villanelle, with a similarly simply lilting melody, initially matched by a single piano line, then with rippling harmonies added. For the remainder of the disc, May is joined by baritone Damien Gastl, firstly for two short songs, La souris and Nuage, and then the cycle La Travail du Peintre. The two miniatures first both have that distinctive shifting chromatic accompaniment, particularly in Nuage, where it is picked up in the melody too. Gastl has a distinctive tone, and he conveys the text with precision and conviction. The cycle that follows characterises artists, including Picasso, Chagall, Klee and Miró, drawing on surrealist poetry by Paul Éluard. Picasso is proud and declamatory, Chagall quirky and quixotic, and Braque has a lyrical, swirling melody. Gastl is sweet at the top of his range, and he meets the challenges of the leaping vocal line in Klee well. Some of the chromaticisms in the middle range are occasionally a little unclear (in Picasso for example), but the mysterious Miró and weighty Villon (with highly effective bell-ringing piano from May) are strongly evocative. Overall, a fascinating and impressively performed collection of some lesser known Poulenc here.
Poulenc, F. 2020. Chamber Music Vol. 2. Damien Gastl, Ahran Kim, Andreas Schablas, Corinna Desch, Martin Rummel, Eva-Maria May. Compact Disc. Paladino Music PMR 0068. 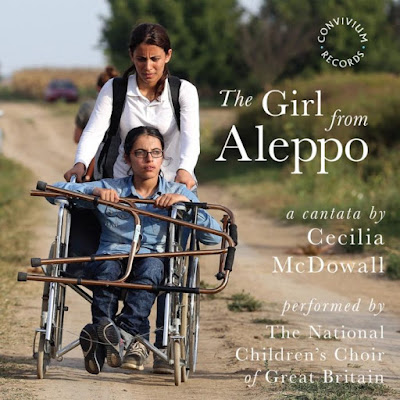 It’s a tall order to cover issues such as child refugees, disability and war in a cantata for children, commissioned for the young singers of The National Children’s Choir of Great Britain, in a way that speaks without coming across as superficial or over-worthy. But Cecilia McDowall’s (b.1951) cantata, Everyday Wonders: The Girl from Aleppo, is in fact highly effective and moving, given strength by the truth of the remarkable story it tells in its five short movements. Nujeen Mustafa, a Kurdish teenager with cerebral palsy, left Aleppo and travelled, in her wheelchair, with her sister, some 3500 miles to Germany, where she found refuge. Her story is told in her biography, co-authored by Christina Lamb, and Kevin Crossley-Holland has drawn on this to summarise her story in the cantata’s libretto. The young singers, directed by Dan Ludford-Thomas, are joined by violinist Harriet Mackenzie and pianist Claire Dunham. There is a musical mix of eastern infused harmonies and melodies, particularly in the improvisatory violin part that opens the work, and simpler, tonal hymnal choral setting, as well as use of some more percussive effects. The work moves from the initial flight from a war-torn Aleppo, with ‘thousands milling at the border’ in the second movement, with effective whispering and chanting repetition, stamping and clapping effects, and shushing sea spray as they make the journey across water (surprisingly rather gently swaying water here – one might have expected harsher conditions, but this isn’t clear from the text). One could easily be cynical about the sweet welcome of the German policeman when they finally arrive safely, greeted with ‘Wilkommen! Welcome to Germany!’, but this is a powerful moment, with the piano briefly quoting Beethoven’s Ode to Joy, and the final movement’s depiction of Nujeen’s new life in safety and full of hope is very touching. This must have been a wonderful experience for the young singers here, and they perform with clear diction throughout, with tuning only a minor issue in some of the chorale sections, and a few impressive keening soprano solos going unmentioned. Mackenzie’s atmospheric playing throughout, along with the rocking energy and pace of Dunham’s piano accompaniment provide a strong framework for the singers. A powerful reminder of the power of music to involve young people and communicate strong messages – in these strange times, I only hope the opportunity for young people to get involved in such projects will return soon.

(Edited versions of these reviews first appeared in GScene, September 2020)