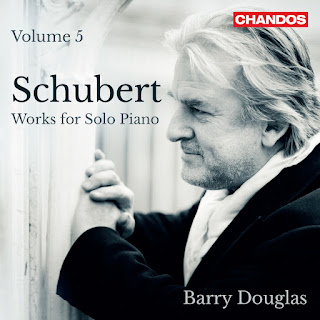 Barry Douglas’ survey of Schubert piano works began back in 2014. In the fifth volume, Douglas presents us with two Sonatas, both composed in the final five years of Schubert’s (1797-1828) short life. As with previous volumes in the series, the disc is filled up with two of Liszt’s transcriptions of Schubert songs, here Liebesbotschaft and Ständchen, both from the Schwanengesang cycle. The Sonata in D major, Op. 53 is emphatic and energetic from the very beginning, and Douglas plays the opening movement with a lively swagger. The slow movement brings a sense of calm, and here Douglas sensitively brings out the lyrical quality of the song-like theme. As the movement ranges through many obscure harmonies, Douglas maintains momentum and the forward trajectory, and the movement’s conclusion, when Schubert expertly combines his two themes has a wonderfully cathartic completeness as a result. The Scherzo is given a jaunty bounce, and its pulsing Trio section has real elegance despite its sometimes shocking harmonic shifts. Douglas then gives the unexpectedly light, Haydnesque Rondo finale a delicate light touch, contrasting beautifully with the two more dramatic episodes. The Sonata in A minor, Op. post. 143 opens sombrely, with a funereal theme, first stated quietly, then more angrily repeated, and a sense of drama continues in the frequent soft/loud contrasts. The second theme is gentler, more prayerful, but still with sudden loud interruptions. Douglas provides suitable weighty emphasis, whilst achieving the necessary contrast with some subtle delicacy in the quieter moments. At the time of composing this, Schubert was depressed, following the onset of syphilis, and brutal treatment for its symptoms. So unlike other Schubert works where a sense of serenity shines through despite everything, this movement never escapes from a weight of despair. The second movement is calmer, despite an odd twiddling interruption in the melody which is then drawn on throughout. The finale sweeps away any residual calm with immediately racing triplets that barely let up. Douglas whips up the pressure throughout, leading up to the thundering climax. The two Liszt transcriptions are delightful. In Liebesbotschaft moves the song melody around within the texture, contrasting with the rippling ‘murmuring brook’ accompaniment, and Douglas brings out the lyricism of the melody throughout. Liszt’s treatment of Ständchen is mostly faithful to Schubert’s song, with a few repositionings of the melody and decorative effects in the final ‘verse’. Douglas gives the melody a slightly halting rubato which gives it a very effective soloistic, singing quality. 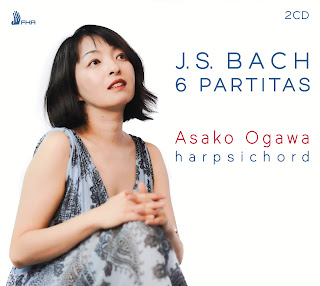 London based harpsichordist Asako Ogawa has already a recording of Bach’s Goldberg Variations under her belt, and now she’s turned her attention to the Six Partitas BWV 825-830. These six suites are amongst the last of the keyboard suites he composed, and the most technically demanding. Yet despite being 40 at the time, they were the first of his compositions to be published. They stand as a showcase for technical brilliance, yet the variety and character in the different movements, as well as the overall style of each partita requires a great range of mood and touch. Some of you may have heard András Schiff performing the Partitas on piano at Glyndebourne in the 2019 Brighton Festival in an intensely captivating performance. On harpsichord however, they are so much lighter, and the dance forms shine through more. Ogawa is incredibly precise and nimble, taking the faster movements at a great pace, with a rattling Rondeaux and Capriccio at the end of No. 2, and a sprightly Courante in No. 4, for example. She adds subtle yet delightful ornamentation on some repeats, making the Menuet in No. 1 really dance. She makes use of a buff stop (where a strip of leather is placed against the strings, creating a muted sound) sparingly, such as in the repeat in No.1’s Sarabande, and creating almost a dulcimer effect in No. 5’s Minuetto. No. 6 is perhaps the most adventurous of the set, and there is a wonderfully free sense of mystery in the dramatic opening Toccata, with a beautifully flowing central fugue. There is more subtle ornamentation in the Allemande’s repeats, and the Corrente has driving energy, with a blistering flourish to the rapid arpeggios. The final angular Gigue would be a challenge to dance to, but here it finishes off this impressive two CD set with great spirit. 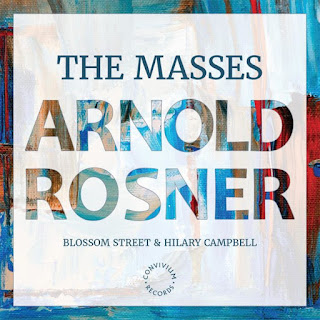 American composer Arnold Rosner (1945-2013) was new to me, and I’ve greatly enjoyed discovering his two choral masses on a disc from Blossom Street, a chamber choir of young singers directed by Hilary Campbell, founded in York but now based in London. Rosner was very much drawn to the polyphonic music of the Renaissance and early Baroque, and this is clear in the structure and form of the two masses here. However, his harmonic language is fascinating and within the construct of a mass setting, he manages to create some incredibly striking and dramatic moments. So his Missa L’homme armé, Op. 50 has the French secular song as its basis – as with many Renaissance masses, the tune is used as a ‘cantus firmus’, a sort of slow-moving spine, about which the other voices move, often using elements of the same tune. Things start out relatively conventionally in the opening Kyrie, although the harmonies become increasingly chromatic through the Christe and the second Kyrie. The Gloria contains a boisterous Laudamus te, with sliding, falling chromatic lines. The Credo is very dark in places, although suddenly bright at ‘Et resurrexit’, with a very dramatic Amen. The Hosanna is bouncy rhythmically, although the repeated ‘excelsis’ becomes rather aggressive, and it is in this movement that the harmonies are at their wildest. A calmer Benedictus gives some respite before the return of the Hosanna. Even the Agnus Dei is pretty full-blooded, although with a calmer conclusion. The Missa In nomine, Op. 62 also uses a cantus firmus, this time the ‘Gloria tibi trinitas’ plainchant. Its Kyrie is weightier, perhaps even more Romantic in terms of its texture and vocal impact. As with the Missa L’homme armé, the Gloria begins quietly, but launches into a lively Laudamus te, almost jazzy in its rhythms, and reminiscent of Poulenc in places. Following its scrunchy Amen, the Credo twists and turns with chromatic rising and falling harmonies. Renaissance simplicity returns briefly but very effectively for the Et incarnatus, with a dark, slow-moving Crucifixus. The Hosanna in the Sanctus is joyfully lively and less harsh than in the previous mass, the Benedictus is beautifully plaintive, and the Agnus Dei has dark harmonic moments, before a pretty insistent, almost demanding ‘grant us peace’ to end. Between the two masses is Peace, My Heart from Nine Tagore Madrigals, Op. 37. A setting of ‘The Gardener’ by Bengali author Rabindranath Tagore, it is lighter in texture than the masses, with lilting rhythms and contrasting groupings of voices. Blossom Street are highly impressive here in what is often very challenging music to sing, and they achieve great clarity of tone and precision in the tuning and harmonies, as well as rich energy in this frequently dramatic and fascinating choral music. Rosner wrote eight symphonies, three operas, as well as other orchestral and chamber music, and on the basis of this, he is definitely worth greater exploration.

(Edited versions of these reviews first appeared in Scene, January 2021)