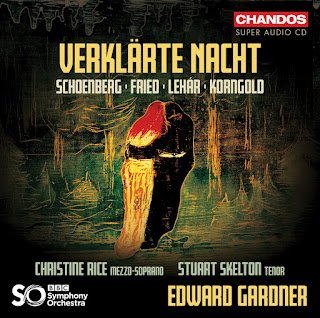 Arnold Schoenberg (1874-1951) originally composed Verklärte Nacht (‘Transfigured Night’) for string sextet, but he later orchestrated the work, and it has become one of his most performed works.  Unlike his later music, it is tonal, although highly chromatic, with a late Romantic stamp, and a strong Wagnerian flavour. The poem by Dehmel which inspired the work is about a woman who walks with her lover in a moonlit forest, and confesses she is pregnant by another man.  Her lover ultimately forgives her, and the intensity of their love and the beauty of the moonlight brings them together.  On this latest recording, Edward Gardner and the BBC Symphony Orchestra have cleverly explored some lesser-known works from the same period, notably Oskar Fried’s (1871-1941) setting of Verklärte Nacht, Op. 9, for mezzo-soprano, tenor and orchestra (with Christine Rice and Stuart Skelton the soloists here). Fried’s setting is lush and atmospheric, with warm narrative duets contrasting with more emotionally charged solos from both characters. Rice and Skelton are beautifully matched, and Skelton shimmers at the top of his range on ‘Glanz’ (glow). It is perhaps a little more obvious than Schoenberg’s intense instrumental interpretation, which here receives a wonderfully mysterious and atmospheric reading, contrasting the full weight of strings at the climactic moment, with an incredibly light touch for the lilting night music and glassy solos. The disc begins with another surprise – Fieber (Fever) by Franz Lehár (1870-1948), for tenor and orchestra. This is a highly episodic piece – perhaps understandable when expressing the delirium of an injured soldier in hospital, flitting between calling for the nurse, thinking of his girlfriend, remembering battle and even an image of his mother, before finally succumbing to death. Skelton is bold and emphatic, yet also captures the sense of confusion and anguish here. We get fragments of romantic waltzes, and even a snippet of the Radetzky March, all lusciously orchestrated. Skelton returns in the four Lieder des Abschieds, Op. 14 (Songs of Farewell) by Erich Korngold (1897-1957). Full of yearning, with texts including ‘Sterbelied’ (Upon Dying), a German translation of a Christina Rossetti poem, the songs employ frequent yearning vocal leaps, and Skelton’s placing is impeccably tender. The second song is more urgent and dramatic, whilst the third and fourth have more of a gentle rocking feel. Korngold’s orchestration is rich and sumptuous, and here as throughout, Gardner and the BBCSO are on top form. 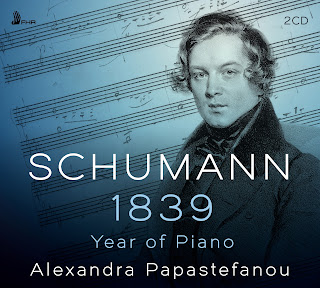 Greek-born pianist Alexandra Papastefanou studied in Moscow, Budapest and the US, and has had lesson from Alfred Brendel. She has performed all of Bach’s keyboard works, and to date, her recordings have also focussed on Bach, as well as her own compositions. Now she turns to Robert Schumann (1810-1856), and in a two disc set, she covers all the works for piano written in 1839. The following year, 1940, is known as his ‘Year of Song’, in which he wrote over 160 vocal works, including 135 solo songs. It was also the year he finally married Clara, after the extended and embittered battles with her father. Whilst not as prolific a year, 1839 did generate a considerable number of works for the piano, and in many ways, they reflect the turbulent time of that year before he was finally able to marry the love of his life. Papastefanou has coined the term ‘Year of Piano’ for her survey of this output. Papastefanou plays with clarity and avoids overindulgence in the more romantic, expressive passages. So the Humoreske, Op. 20 is suitably boisterous and playful to begin with, yet the stuttering rhythms of the second section have a subtle unease, followed by darker, expressive then tender and lilting third and fourth sections. Schumann said when writing this ‘I have been sitting at the piano, composing and writing, laughing and crying all at once’, and there are certainly a lot of moods to capture here. The same might be said of the 4 Nachstücke, Op. 23, with a slightly pacy, agitated funeral procession, and swirling, darkly turbulent night revelry. Papastefanou takes some freedom with the tempi in the Arabeske, Op. 18, yet could perhaps take a little more time in the expressive recitative-like moments, but the rippling repeating rhythms have a real flow. The Faschingsschwank aus Wien, Op. 26 (Carnival Jest from Vienna), is fascinating, with its embedded reference to the Marseillaise, at that time banned in Vienna, and lively dances, rippling textures and central sad Romanze. Again, Schumann’s moods change from moment to moment, yet Papastefanou makes sense of these transitions, making coherent sense of the contrasts. The 3 Romanzen, Op. 28 are darker than one might expect from the title, and a sense of anxiety pervades. The middle Romanze has moments of calm, but the third is jumpy and mercurial. There are a number of shorter pieces filling out this two disc collection, some part of larger collections published later, but here for the year of their composition. They merit their inclusion, however, and the dark smouldering Praeludium from Bunte Blätter, Op. 99 and the delicately dancing Phantasiestück from Albumblätter, Op. 124 are given sensitive readings here. A fascinating collection of lesser-performed works here, and Papastefanou performs throughout with virtuosic command and sensitivity to the constantly changing moods.

(Edited versions of these reviews first appeared in Scene, April 2021)