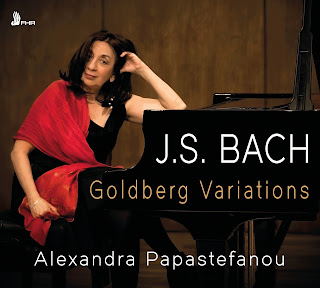 When a new recording of J S Bach’s (1685-1750) Goldberg Variations comes along, it’s always interesting to hear what the performer makes of this iconic work, and it’s particularly intriguing to have two recordings come along at the same time. But when one is performed on the harpsichord (as Bach composed the work) and the other on the piano, the comparison gets even more fascinating. Of course there are some that would immediately dismiss a performance on a modern piano, but that would be a pity. There isn’t space here to go over all the arguments – would Bach have used the piano had it existed in his day? How does a pianist get around the use of two manuals (essentially two keyboards on the same instrument) which Bach sometimes uses to make different lines play the same note and cross each other? How much expression in terms of dynamics and pedalling is appropriate for a piano performance, given that these are not possible on the original instrument? Suffice to say, this masterpiece stands up to great variety of interpretation, and hearing different keyboard players’ solutions to its challenges only serves to reveal its greatness. 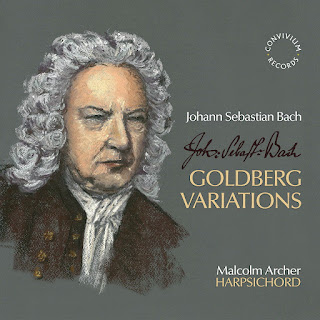 A word about the structure here – following an opening Aria, there are then 30 Variations. Every third variation is a canon (a round), although the interval between the canon’s starting notes increases each time, and then in between are virtuosic study-like variations, as well as character variations, such as a French Ouverture, a Giga and a Fughetta. I reviewed Greek-born pianist Alexandra Papastefanou’s all Schumann disc very favourably back in April, although she also has two previous discs of Bach in her catalogue. Harpsichord Malcolm Archer is new to me, although he has a strong career as a conductor, organist and harpsichordist, as well as composing, particularly choral works. Archer’s instrument, built in 2000 by Alan Gotto is a copy of a 1728 instrument by Christian Zell, who in turn was a pupil of Mietke, a maker that Bach would have known well (he may even have owned one himself). The sound is bright and ringing, with a lightness suited to the rapid articulation required here. Bach’s markings of tempo are sparse, so there is plenty of scope for different approaches here – for example, Archer’s Variation 25 (marked Adagio) is just under four and a half minutes long, whereas Papastefanou takes almost twice as much time over this minor sarabande. Yet both approaches work – Archer gives this a stark solemnity, whereas Papastefanou’s take is more overtly expressive. Archer’s take, however, is not actually as quick as the timing would suggest – here, as elsewhere, he omits some repeats of sections, so his complete recording comes in at nearly 15 minutes shorter than Papastefanou’s. So in fact, Papastefanou’s more virtuosic variations, such as the jangling 28th Variation, are sprightlier. If I were to choose my ideal Goldberg recordings, it would be Mahan Esfahani on harpsichord, and Andras Schiff on piano, but there is always space to hear new takes on this, and both recordings here have much to commend. Archer brings delicacy, precision and lightness of touch, whilst Papastefanou gives us a more expressive approach, with skillfully smooth lines, and some blistering virtuosity in her faster moments. 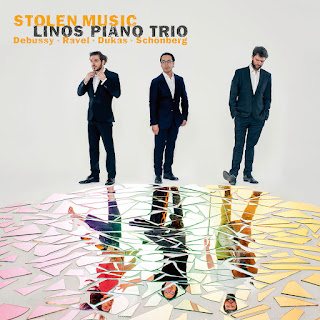 On their second recording, ‘Stolen Music’, the Linos Piano Trio have taken some iconic early 20th Century orchestral works and transformed them for their own chamber forces – and why not? They have arranged three of the works themselves, French gems by Debussy, Ravel and Dukas. Debussy’s Prélude à l’après-midi d’un faune is full of colour and the hazy intoxication of a sleepy afternoon, and whilst Pan’s flute is missing here, the trio make great use of silky lines from violinist Konrad Elias-Trostmann, as well as the high registers of the cello, from Vladimir Waltham. Prach Boondiskulchok on piano fleshes out Debussy’s rich harmonies remarkably with warm tone and delicate placement. Dukas’ The Sorcerer’s Apprentice is another very well-known atmospheric work, full of orchestral drama and colour. Their piano trio version here obviously can’t replicate the full scale and range of textures, but with clever use of glassy strings and pizzicato, as well as frenzied piano moments, the relentless march towards disaster is effectively conjured up, with a truly wild climax. Ravel’s La Valse has a similar feeling of looming disaster, here with the seemingly formal waltz slowly spiralling out of control, even tipping over the edge into decadent chaos. In their arrangement, the Linos players burst the piano trio free of the formal salon into wild abandon – the variety of textures and effects they generate from the three instruments here is impressive, and they almost achieve the sense of impending seasickness generated by the orchestral surges at the conclusion. The other work here is Schoenberg’s Verklärte Nacht, here in a transcription by Eduard Steuermann from 1932. Steuermann studied composition with Schoenberg, and premiered his Piano Concerto. Back in April I reviewed the BBC Symphony Orchestra and Edward Gardner’s recording of the orchestral version of this psychological drama, in which a woman walks with her lover in a moonlit forest, and confesses she is pregnant by another man. The original version was for string sextet, so the piano trio format is not so far away, with the piano part doing a lot of heavy lifting in terms of the rich harmonies. The lyrical higher registers of the cello are used to match the passionate outbursts from the violin, and the piano is a constant driving force of dramatic energy. Through their expert and sensitive arrangements of the French works, as well as their deeply expressive rendition of the Schoenberg, the Linos Piano Trio communicate deep understanding of and commitment to these passionate works, bringing a freshness to these familiar works. I look forward to these players stealing more repertoire if these arrangements and performances are anything to go by.

(Edited versions of these reviews first appeared in Scene, August 2021)