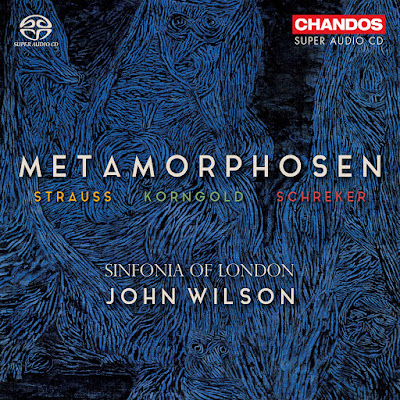 In 2018, conductor John Wilson relaunched the Sinfonia of London, a session orchestra with a long history, particularly in recording film music, and for their second recording with Chandos, they focus on German and Austrian composers, post World War II. Richard Strauss (1864-1949) composed his Metamorphosen, for 23 solo strings in 1945, and it is a heartfelt elegy and a musical realisation in many ways of the horrors that had been experienced in the preceding war. The Sinfonia of London strings here produce a deeply resonant and rich sound, and Chandos deserve credit for achieving precision in the balance, especially when all 23 lines are active. No detail is obscured, and Wilson steers the dynamic swells expertly too. In Strauss there are many climactic moments, and it can lose direction, but here there is a definite trajectory to the warmer major passionate centre, before the opening tragic lamenting material returns following a sudden violent stop. Yet despite the title, there is no metamorphosis into a positive new world – Strauss marks the end ‘In Memoriam’, and the subside into quiet darkness is achingly sad. The short Intermezzo for String Orchestra, Op. 8 by Franz Schreker (1878-1934) is an interesting work, with an opening reminiscent of Schoenberg’s Verklärte Nacht (written at around the same time), but moments of sweet, pastoral string writing too, and perhaps less overall bite. It is given a richly sensitive reading here, with Wilson’s attention to dynamic contrasts providing shape to its overt romanticism. The second half of the disc is given over to the Symphonische Serenade, op. 39 by Erich Korngold (1897-1957). This was composed just before Korngold returned to Austria from the US, during which time he had carved out a successful career in Hollywood, pretty much establishing the Hollywood movie soundworld of the time, and just after he had a heart attack which required him to step back from recording and conducting. Its opening movement shows an immediate shift from the more obvious ‘Hollywood’ sound, with some strident harmonies and tensely dramatic writing. The second movement Intermezzo has virtuosic pizzicato writing, and here the Sinfonia of London players excel, with tight ensemble and rhythmic energy, making the strange brief interjections of glassy bridge bowing and swoops stand out even more. The Lento religioso is heartfelt, but with a Mahlerian profundity that is arresting, and Wilson and the players give this sumptuous weight without any wallowing, and the repeated notes throb with insistent intensity. The violent outburst which interrupts the solace of the central solo passage is positively shocking here, and Wilson certainly extracts maximum drama from the score. The Finale sets off at a cracking pace, and is full of urgent energy. Wilson and the Sinfonia of London are highly impressive throughout these performances, bringing energy, precision and a glorious string sound to this rich repertoire. 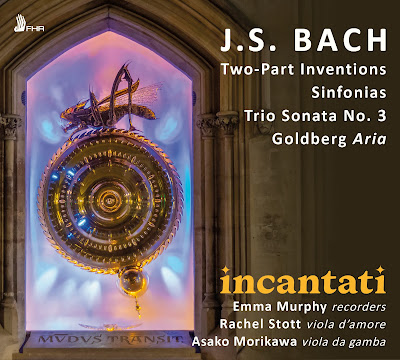 Now for Bach with a difference. The ensemble incantati, which consists of Emma Murphy (recorders), Rachel Stott (viola d’amore) and Asako Morikawa (viola da gamba), have collected together a selection of J. S Bach’s (1685-1750) keyboard works to perform in various combinations of instruments. Pianists will be familiar with the Two-Part Inventions and Sinfonias – basically pieces with two and three separate lines, with an educational intent, to develop playing the independent lines together. The same applies to his Trio Sonatas, or Organ Trios as they were actually written, which involve three parts – essentially two hands and the feet. In playing these with two or three separate instruments, immediately the individual lines come into their own, and no fluidity is lost through trying to negotiate playing them together on a keyboard. But it is in the different timbres of the instruments that add something new here. And that’s where the flexibility of Murphy’s different recorders and voice flutes is a bonus – so sometimes a warm tenor recorder is matched with the sonorous viola da gamba, or a brighter soprano recorder is paired with the slightly more brittle sound of the viola d’amore. They are also careful here in their selection, with the darker, more sombre pieces (eg. the Sinfonia No. 4, or the mournfully sighing No. 9) contrasted with the bright, lighter examples (Inventions Nos. 1 and 2, for example). There are also beautiful renditions of Bach’s chorale tune arrangements, such as the prayerfully lilting Allein Gott in der Höh sei Ehr, and the joyful, dancing Herr Jesu Christ, dich zu uns wend. They end their disc with the Trio Sonata No. 3, with more virtuosic lines for the alto recorder in its first movement, a lightly singing central movement, and a bright (if slightly stately for ‘vivace’) finale. This is then followed by a wonderfully graceful reading of the Aria from the Goldberg Variations, with the viola d’amore this time taking centre stage, and the tenor recorder and viola da gamba providing subtle inner and lower lines. A delightful collection, highly recommended.

(Edited versions of these reviews first appeared in Scene, June 2022)