The Tallis Scholars - première recording of Sainte-Chapelle by Eric Whitacre 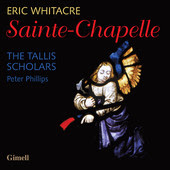 The Tallis Scholars have lost no time in recording Eric Whitacre's new piece written for them, Saint-Chapelle, which I heard them première at their 40th anniversary concert at St Paul's (see my review here).  They recorded it in the chapel at Merton College, Oxford, and it has been released as a digital download - their first digital only download, available from iTunes here.  It is also their first first recording of a living composer since they commissioned and premièred John Tavener's Ikon of Light in 1984.

I am pleased to have the opportunity to hear this piece again so soon after that first performance at St Paul's.  Often, when hearing a new piece for the first time in a concert performance, it is hard to get the full sense of the work as a whole.  My first impression was of writing extremely well suited to the pure, blended sound of the Tallis Scholars, and this is definitely confirmed by hearing this recording.

Whitacre asked his long-time friend and collaborator, Charles Anthony Silvestri to construct a text around the idea of stained glass windows which Whitacre saw in a 13th century chapel in Paris.  The 'story' Silvestri created centred around the idea of a young girl hearing angels singing from the stained glass.  The text is minimal in terms of telling the story, in Latin, but the words 'Sanctus' and 'Hosanna in excelsis' return, and provide the climax points to create the image of the angels singing to the girl from within the brightly lit windows.  Whitacre's trademark scrunchy harmonies and clusters are here, but this actually stands out for me as one of his most effective pieces, along with When David Heard and Cloudburst.

It opens with a chant-like section for male voices, before all voices sing the first 'Sanctus', with staggered entries constructing the layered harmonies.  This creates a particularly luminous effect, and really does conjure a sense of the light shining through fragments of glass.  The Tallis Scholars also produce such a beautifully blended and warm sound, again adding to this sense of light flooding into space, particularly on the word 'Hosanna'. 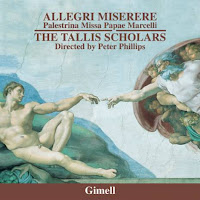 This is definitely a piece that deserves to join the established Whitacre repertoire, and I would certainly love to have the opportunity to sing it at some point.  I also hope The Tallis Scholars continue this exploration of contemporary repertoire, in addition to their ongoing championing of Renaissance composers.  Next up must surely be a recording of Gabriel Jackson's Ave Dei partis filia, their other commission that they premièred at the 40th anniversary concert.  In concert, this actually had a greater impact on me than the Whitacre, so I await a recording of this with expectation.

Finally, The Tallis Scholars are also offering a free download of the Agnus Dei from Palestrina's Missa Papae Marcelli, available from iTunes just until 1 April 2013, in honour of the papal inauguration - download it here.