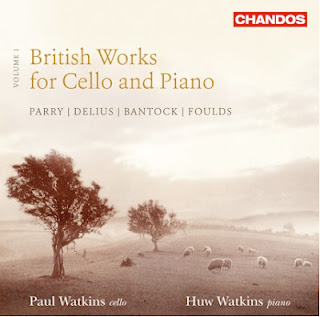 Brothers Paul and Huw Watkins have released the first volume of an exploration of British works for Cello and Piano.  Their first volume includes Sonatas by Hubert Parry (1848-1918), Frederick Delius (1862-1934), John Foulds (1880-1939) and a short piece, Hamabdil, by Granville Bantock (1868-1946).  The Parry is the earliest work, and it is clearly influenced by his hero, Brahms, and makes use of a four-note motif in the outer movements, with a particularly lyrical middle slow movement.  The Delius Sonata has just one movement, although it has three distinct sections.  Like much of Delius’ music, it has a seemless flow, and this can make his music difficult to shape.  However, the Watkins brothers manage to achieve a sense of direction in the melodic writing for cello and the often chordal piano accompaniment.  Bantock’s Hamabdil is a short setting of a Jewish hymn, and is a delightful miniature, with Paul Watkins relishing in the cadenza writing for the cello.  They close the disc with the most interesting work – Foulds’ expansive Sonata from 1905 (although it survives only in the revised version from 1927).  It is an extrovert, expansive work, with a curious mix of romanticism and more innovative techniques, such as whole tone scales, and quarter tones.  The slightly queasy-making use of quarter tone double-stopping in the slow movement, over chilly open octaves in the piano is particularly striking, and very effective.  Overall, enjoyable performances of four varied works, all previously unknown to me.  I await Volume 2 with interest. 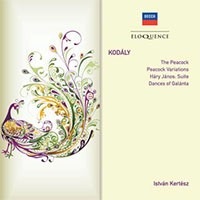 Briefly, check out two re-releases of music by Zoltán Kodály (1882-1967).  The recordings date from the late sixties to seventies, and one disc include the Háry János Suite, the Dances of Galánta, and ‘The Peacock Variations’ (sung by London Symphony Chorus), whilst the other is a two disc set, with Psalmus Hungaricus, Missa Brevis, Pange Lingua, Psam 114, the Hymn of Zrinyi and Laudes Organi, all sung here by Brighton Festival Chorus (before my time singing with them, but many current members took part in the recordings).  István Kertész conducts the London Symphony Orchestra on the first disc, and in Psalmus Hungaricus – this recording was described by the Penguin Guide as ‘splendidly vibrant’ and ‘outstanding’ (March et al, 2003, p678), and BFC’s founding conductor, László Heltay conducts the other works.  The second set is filled with Sir Georg Solti conducting the Budapest Festival Orchestra in his final recording, of Bartók’s Cantata Profana.  So a couple of great budget price discs, covering the key choral works of Kodály, with excellent performances from Brighton’s own Chorus – see here for a chance to hear us this month. 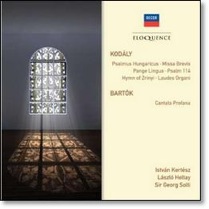 (Edited versions of these reviews first appeared in GScene magazine, March 2013)
Posted by nicks-classical-notes at 06:10