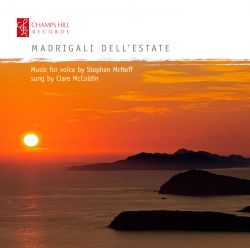 I have to confess I approached this new recording by mezzo Clare McCaldin of music for voice by British composer Stephen McNeff completely blind, not knowing the performer or composer at all previously.  This is always an interesting voyage of discovery, particularly when I wouldn't have necessarily picked this out, had a review copy not been offered.

So, first of all, a bit about Stephen McNeff (b.1951).  Born in Northern Ireland, he grew up in Wales, before studying composition at the Royal Academy of Music.  He has written a considerable volume of music for opera and theatre, but also choral, chamber and instrumental works.  He has been visiting Italy since 2004, and now describes it 'something of a second home for part of the year'.

The work which gives this CD its title, Madrigali dell'Estate, is a cycle of eleven songs, setting poems by the Italian poet, Gabriele d'Annunzio (1863-1938), from the Abruzzo region in Italy.  Clare McCaldin shares an interest in the poet, and commissioned the work from McNeff, with whom she has collaborated on a number of works.  The poems together explore the sense of a languorous summer, slowly dying, and they are incredibly evocative.  The piano accompaniment, admirably played by Andrew West, has largely the role of brief, spiky interjections, whilst the vocal line is almost recitative in nature, with extreme leaps and dynamic range.  Clare McCaldin's warm, rich voice suits the atmospheric texts, and also avoids the stark vocal writing becoming too strident.

This is then followed by a work for voice and string trio, Farfalle di Neve, composed specifically with McCaldin's voice in mind.  She commissioned the work, specifically wanting something set in Italian, and it is also a setting of two fragments of text by d'Annunzio.  The title translates as 'Butterflies like snowflakes', and is again very atmospheric, almost impressionistic.  The string trio provide shimmering scene-setting, over which McCaldin's smooth, sustained vocal lines sail.  There is less of the jerky, recitative here, with more expressive and melismatic phrases, giving McCaldin's full voice more chance to bloom.  The string trio (Philippa Mo (violin), Sarah-Jane Bradley (viola) and Jonathan Byers (cello)) provide a sensitive and suitably atmostpheric backdrop.

A Voice of One Delight explores the last hours of poet Shelley's life in the bay of La Spezia in 1822.  The work combines spoken narration, quasi recitative and sung settings of Shelly's poetry.  The narrator role is of Jane Willams, whose husband died with Shelley, and who was the object of Shelley's desire in his final months.  The singer/narrator is accompanied by flute (Kathryn Thomas), viola (Sarah-Jane Bradley) and harp (Suzanne Willison-Kawalec).  I didn't expect to like this as much as I did - speech and music is difficult to get right, yet this thankfully avoids feeling mannered or over-contrived.  In fact as the piece develops, and the strange and tragic events unfold, I found myself very much drawn into the story and slightly claustrophobic atmosphere created by the combination of just three instruments and the voice.  The flute part in particular is extremely unsettling, and the harp and viola provide often harsh, rhythmic underpinning.   A fascinating work, which I imagine would be very effective performed live.  You can see a staged version of the piece, with revised text, performed by Clare McCaldin on YouTube here.

The disc then ends with Three Abruzzo Folk Songs, returning to Italian texts, although now in the dialect of the Abruzzo region.  The composer says they are not based on specific folk songs, but are intended to reflect the music of the the region.  Brief, and for unaccompanied voice, they provide a delightful end to a fascinating programme, and allow Clare McCaldin to show just how natural she is in the Italian idiom (to my ears anyway).

The instrumentalists on the disc are presumably members of the Orchestra Nova Ensemble, credited on the disc as being conducted by George Vass.  I'm not absolutely clear which works would have required conducting - most probably A Voice of One Delight, and possibly Farfalle di Neve, although the chamber nature of these works, I am not sure how much conducting will have been necessary.

I really enjoyed this disc, and it provides a great showcase for both singer and composer.  I would be interested to hear McCaldin singing other repertoire, and also to explore more of McNeff's compositions.