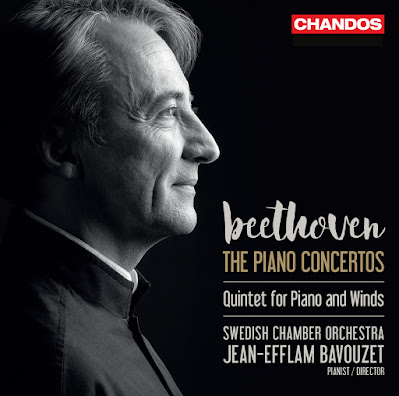 French pianist Jean-Efflam Bavouzet released his set of complete Piano Sonatas by Beethoven (1770-1827) back in 2017, and it still remains the go to edition for me. So it’s great to see him now turn his attention to the five Piano Concertos. Spread across a three-disc set, he throws in a performance of the Quintet for Piano and Winds, for which he is joined by players from the Swedish Chamber Orchestra, who play alongside him in the concertos. Beethoven’s five concertos span well over twenty years of his career, and sketches exist at either end of concertos from as early as 1783 and as late as 1815. Here the five completed concertos are placed in order of their composition, so No. 2 in B flat major comes first, as it was actually composed back in 1787, before No. 1 in C major (1795). No. 2 is clearly Mozartian in many ways, but already here we have Beethoven’s stamp on the genre, with dramatic contrast of emphatic statements followed by delicate responses in the slow movement, and constant playing with the sense of downbeat and upbeat in the joyful Rondo. No. 1 has the same sense of rhythmic confusion in its Rondo too, and here Beethoven makes wonderful use of the clarinet in conversation with the piano in the slow movement. There is sprightly energy from the Swedish Chamber Orchestra throughout, and Bavouzet positively fizzes in the rippling runs, and attacks the finales with a great sense of fun. On the other hand, his delicacy of touch in the slow movements is delightful, and this comes to the fore again in No. 3 in C minor. The Swedish wind players are also prominent here, and their conversational exchanges with Bavouzet are subtle and poised. In the faster movements, Bavouzet’s tempi are always brisk, but never feel rushed, his fast runs always fluid and effortless. No. 4 in G major moves things onto another level, with a much broader sense of architecture, from its prayerful opening, right through to the galloping finale. Again, the slow movement is conversational, this time between just strings and the piano, with Bavouzet and the Swedish players creating a moment of intimacy amidst the grandeur of the outer movements. No. 5 in E flat major (the ‘Emperor’, although the origin of this nickname is unclear – it definitely wasn't specifically linked to Napoleon, as famously the Eroica Symphony was initially) is again on a grand scale, and there is a real sense of opening out here, with more expansive playing from both Bavouzet and the orchestra. The outer movements have great panache, particularly in the joyfully ebullient finale. The central slow movement is understated, and Bavouzet avoids over-sentimentalising proceedings – although I could have tolerated a little more indulgence here. But this is a minor point of taste – overall, this is an impressive collection, and I’ll definitely be returning to this frequently, alongside Bavouzet’s Sonata set. The bonus Quintet is a treat – a young work from Beethoven, giving greater prominence to the clarinet than to the other wind instruments (oboe, bassoon and horn), but packed full of joyful melodic material. The Swedish players here play alongside Bavouzet with great style, creating a pleasing palate-cleanser to round off the three-disc set. 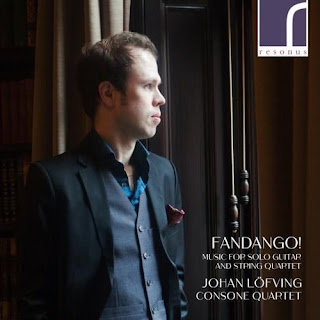 Last year I reviewed a delightful recording from Flaugissimo Duo, who I first came across when they were part of the Brighton Early Music Festival’s BREMF Live! Scheme. Now, one half of the duo, guitarist Johan Löfving has recorded Fandango!, a collection of music for solo guitar from the late 18th and early 19th centuries, when the six-stringed guitar flourished in the salons and concert halls of Paris and Vienna. So the works on offer here vary from the Viennese classicism of Mauro Guiliani’s (1781-1829) Sonata Brillante, with its playful Beethoven- or Hummel-esque pianistic style, and lyrical melodies, to the more explicitly Spanish influenced Fandango Variado by Dionisio Aguado (1784-1849), with its swirling dance rhythms and strumming flourishes. Interestingly, the guitar’s lack of ability to sustain notes creates interesting pregnant pauses in the slow movement of the Giuliani, but Löfving’s gentle vibrato manages to still make the melodies sing here. French composer, Napoléon Coste’s (1805-1883) Soirées d’Auteuil is unashamedly romantic, full of operatic melodies, virtuosic runs and cascading arpeggios, and Löfving has great fun here. A sense of decorum is restored in the brief Étude from the great composer and teacher, Fernando Sor (1778-1839). Löfving’s touch here is delicate and expressive, bringing out the duetting melodic lines with great sensitivity. Giulio Regondi (1822-1872) spent most of his adult life in the UK, and his relatively recently discovered Introduction et Caprice, following its chorale-like opening, is full of dancing virtuosity, another chance for Löfving to demonstrate the fluidity of his playing. To close the disc, he is joined by the Consone Quartet, current BBC New Generation Artists, for a performance of Luigi Boccherini’s (1743-1804) Quintet No. 4. This opens with a warm Pastorale, full of birdlike violin twiddles and musette-droning lower strings. The sound here is somewhat muted, and the rippling guitar part is understated, with only a brief moment of emphasis towards the movement’s conclusion. The strings sound more insistent in the second movement, but again, perhaps with an aim to achieve the right balance with the quieter guitar, the overall sound is subdued, although energy picks up with rustic dancing and a joyful, trilling close to the movement. The final movement, after a dramatic introduction and guitar solo, launches into a spirited and lively Fandango, and here the performance takes flight, with playful, almost laughing figuration from the first violin, and cheeky sliding gestures from all the string players. To add to the joyful sense of occasion, Nanako Aramaki joins in with castanets, and the energy rises to a spirited conclusion with lots of string tremolo and guitar strumming. A fun end to a very enjoyable disc, full of refreshing and sprightly-performed repertoire. 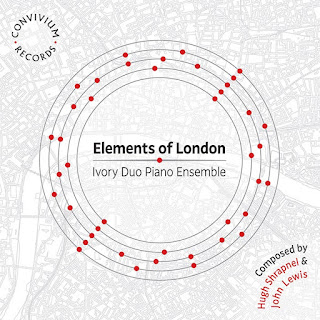 The Ivory Duo Piano Ensemble (pianists Natalie Tsaldarakis and Panayotis Archontides) and composers Hugh Shrapnel (b.1947) and John Lewis (b.1947) were completely unknown to me, so their new disc, Elements of London, combining movements from two collections by the composers, was a total voyage of discovery. Lewis’ pieces (Elements) are all inspired and named after chemical elements, whilst Shrapnel’s (London) are all associated with people, places and even politics of South London – hence the combined title of the disc – and they are mixed together to form an overall programme. Despite their differing inspirations, the pieces fit together remarkably well, with influences of minimalism, jazz and blues cropping up throughout. Lewis makes use of insistent rhythmic repeated chords in Niobium, and minimalist influence is most evident in Mercury and Phosphorus. Yet there are Latin-infused rhythms in Chlorine, and hints of Shostakovich in the gently romping Cerium. Shrapnel’s pieces are more overtly expressive, such as the atmospheric Ladywell Station (surely quoting Misty) with its background train whistles, and the plaintive, lamenting In Memoriam Jane Clouson. Dad’s Army even makes an appearance in Hunt Hunt, a defiant political piece dedicated to the Save the Lewisham Hospital Campaign. The pieces have been sensibly curated here, with energy and drive contrasting with more lyrical and atmospheric movements. Few pieces are longer than five minutes, yet they are surprisingly effective in capturing a mood or energy. Tsaldarakis and Archontides have clearly developed a strong affinity for this music, and a close relationship with the two composers, and their performances are strong throughout, contrasting well the thicker chordal textures with bright melodies (often in bell-like octaves), and enjoying the jazz-infused melodies. A very enjoyable discovery.

(Edited versions of these reviews first appeared in GScene, October 2020)