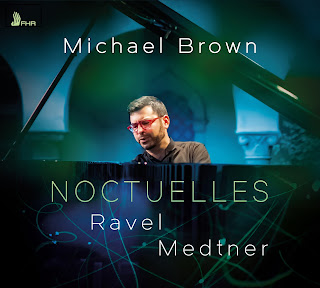 American composer-pianist Michael Brown takes the title of his latest recording, Noctuelles from the first movement of Maurice Ravel's (1875-1937) Mirrors, which he performs in full here. It is followed by the Second Improvisation (in variation form), Op. 47 by Russian composer-pianist, Nikolai Medtner (1880-1951).The five movements of Ravel's Miroirs were each dedicated to members of 'Les Apaches', a Parisian artist circle, including painter Paul Sordes and the poet Léon Paul Fargue. It was a line from Fargue that inspired that opening movement, Noctuelles (Night moths), and its shimmering, fluttering textures are mesmerising. Even its slower, more limpid central section, there are slight flutterings, and Brown's dexterity and sensitivity here is striking. In Oiseaux tristes, the rippling textures are more tentative and the atmosphere darker, to which again, Brown is sensitive. Une barque sur l'océan is watery and flowing, and Brown brings out the sea-sick swells and stormier moments as the movement develops. In contrast, Albarado del gracioso is an athletic, energetic dance, and Brown enjoys the jumpy, balletic rhythms, and with its devilish repeated notes and bravura finish, he gives us a virtuosic show, before the mysterious tolling bells and dark clashing harmonies of the final movement, La Vallée des Cloches. Turning to the Medtner, Brown writes about how his research on the piece led to the discovery of two previously unpublished variations, and he adds these here to the fifteen existing variations on the theme, which Medtner calls 'The Song of the Water Nymph', an allusion to Rusalka, Russian folklore's malevolent spirit. He also discovered that Medtner had various orderings for the variations, and so Brown has combined his own take with Medtner's possible orderings to present the set here. The theme is lyrical and watery, yet chromatically ambiguous, this contrast providing the germ for Medtner's variations, from the twisting dark harmonies of Meditation, and the chorale-like and least chromatic Incantation to the shifting harmonic sands of La cadenza, in which the melody is almost hidden amongst perpetual virtuosic activity. Yet there is lightness too, in the sprightly Elves, frisky Gnomes, and chattering Feathered Ones. None of the variations are longer than a couple of minutes or so, and the calmly dark In the Forest, with its overlapping pedalling, and the racing Wood-Goblin are gone in a flash. Brown manages to bring out these contrasting characters, whilst still managing to create a unifying sense of direction, leading to a beautifully contemplative Conclusion, the melody clear and a long-held chord and quiet sombre cadence to finish. Impressive throughout, Brown demonstrates incredible virtuosity, but more than this, great sensitivity to the detail and contrasts within this remarkably evocative music. 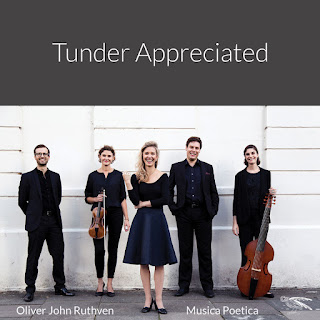 The early music ensemble, Musica Poetica, directed by Oliver John Ruthven, took part in the Brighton Early Music Festival BREMF Live! scheme back in 2012. For their debut recording, they present a selection of music by the German composer, Franz Tunder (1614-1667). A new one for me, he was the father-in-law of Dietrich Buxtehude (1637-1707), and there is a clear Lutheran line through him to the music of Bach, whilst at the same time elements of Italian influence - he may have studied with Girolamo Frescobaldi. And on their recording, Tunder Appreciated, Musica Poetica indeed add to their selection of works by Tunder pieces by both Frescobaldi and Buxtehude. From Tunder's seventeen extant vocal works, they have chosen here three works for solo voice and viols, and they end their disc with a wonderful choral cantata, Ein feste Burg, Tunder's arrangement of one of Martin Luther's most famous Reformation hymns. Opening with sinuous strings, Tunder creates a wonderful mixture of textures, with choral and solo lines mixed to great effect, and the ensemble achieve just the right balance of choral blend and individuality of line. For the other three Tunder works, three of the five singers on the recording are given a solo outing. First, soprano Lucy Knight performs Tunder's setting of Psalm 137, Am Wasserflüssen Babylon (By the Waters of Babylon), with a beautifully clear voice, delivering the text with precision over the richly textured accompaniment. Alto Collin Shay brings us Salve mi Jesu, steadily declamatory in tone, and then emphasising Tunder's word-painting of sighing and weeping with great sensitivity, and the stuttering ornamentation is impressively adept. Finally the bass, Christopher Webb gets a turn, in Da mihi Domine, a highlight of the recording for me. Webb's voice is rich yet agile, and he shifts between tender pleading and weighty declamation with ease. This piece also really summed up the musica poetica style (after which the ensemble named themselves), with this declamatory setting of text combined with expressive (and often radical for the time) musical shapes and figurations. Here, the accompaniment also shines through, with rocking melodies passed between instruments, and the two violins echoing the vocal lines beautifully. The two works from Girolamo Frescobaldi (1583-1643) are O mors illa, a short but beautiful duet for tenor (Peter Davoren) and bass, beautifully blended here, and accompanied delicately by Toby Carr on theorbo and Ruthven on organ, and Partite sopra Passacagli for solo organ, with its gently lilting introduction, running, winding lines and impressively fluid passacaglia. And the only time when all five singers and the full band come together are for Buxtehude's Ad Latus, from his Membra Jesu Nostri. A meditation on the crucifixion, this glorious work is full of invention and rich detail, and the dancing string introduction here has a real spark. The blend of the five voices is initially not always even, with a couple of voices dominating, although when the opening music returns, the balance seems to have settled. In the central sections, the touch is light, and one is left eager to hear their performance of the complete work. So, impressive performances here, and a great introduction to Tunder, of whom I hope to hear more.

(Edited versions of these reviews first appeared in Scene, March 2021)