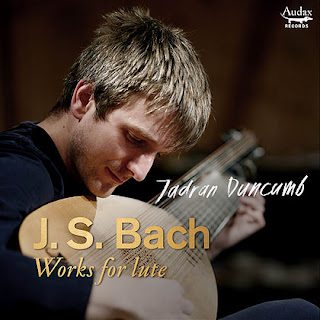 Norwegian lutenist Jadran Duncumb is on his third recording for Audax, this time performing works for the lute by J S Bach (1685-1750). There is debate about the original instrument Bach intended the works for, with question marks about a kind of gut-strung harpsichord called the Lautenwerk. Nevertheless, despite the lute not being Bach’s instrument, he did specify lute for some works, and arranged his own works (such as a Cello Suite and a movement from a Violin Sonata) for the instrument. In all there are six works in Bach’s output, and Duncumb has recorded four here. First, a word about the recorded sound. The lute is naturally a quiet instrument, and it can struggle to make itself heard outside a generous acoustic. Recordings also try to avoid the extraneous sounds of fret contact and string plucking. Duncumb has consciously gone against this, opting for a full, close recording which allows for the instrument’s true character to come to the fore, grit and all. That’s not to say there isn’t delicacy and lightness in his playing here, but he also produces a broader range of dynamics and a richer, fruitier sound than often heard on the instrument. The Suite in G minor opens the disc, this being Bach’s arrangement of his Cello Suite No. 5. It opens with a stately Prelude, followed by a gracious Allemande, and a gently swinging Courante. The Sarabande has a kind of sparse drama, and the second of the two Gavottes is beautifully fluid here in the running lines. The final Gigue is highly virtuosic, with its snappy rhythm and circling lines, taking the instrument to the extremes of register, and Duncumb makes his instrument sparkle with energy here. The brief Prelude in C minor will be familiar to pianists, as it was later written down in keyboard notation, and adopted as a keyboard work in the 19th century. Its perpetual motion of arpeggios is actually ideally suited to the lute, and Duncumb expertly brings out the underlying harmonically shifting line from within the constant movement. The Fugue in G minor, another arrangement by Bach, this time from the Violin Sonata No. 1, is taken at a pace here by Duncumb, with impressive clarity in the fugal lines, ringing bass notes and an impressive flourish at its climax. The remainder of the disc is given over to the Partita in C minor (one of the works that may or may not have been composed for the mysterious Lautenwerk). Its opening Fantasia, with its falling bass line and swirling melodic line above is immediately captivating in Duncumb’s hands here. The Fuga to follow has incredibly clear voice leading in the flowing lines, and he maintains momentum despite its monumental proportions with a constant sense of direction and dynamic ebb and flow. In contrast, the Sarabande opens with a quiet air of mystery, yet Duncumb allows the emerging line to sing, with a beautifully silky chromatic scale near to the end. After a gently dancing Giga with effortless ornaments, he launches straight into the Double with smoothly running motion, a ringing tone throughout, creating a peel of bells in the cascades of falling lines, and building to a full-bodied conclusion. These are highly impressive performances, amply demonstrating that the lute is definitely not a shy wallflower in the right hands. 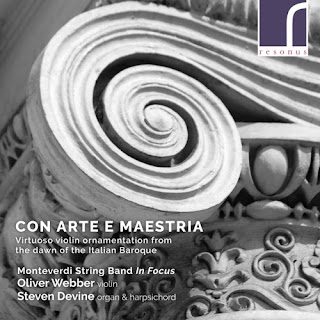 In February, Brighton Early Music Festival presented an online concert by Oliver Webber, violinist and director of the Monteverdi String Band, with organist and harpsichordist, Steven Devine. Con Arte e Maestria – ‘with art and mastery’ – refers to the practice of virtuoso violin ornamentation from the dawn of the Italian Baroque, and Webber and Devine have now released a CD of the same name. There is a lot of technical detail behind the complexities of ornamentation practice, and Webber’s CD notes are highly instructive, but for our purposes here, Webber demonstrates the ways in which virtuoso violinists of the late sixteenth century took existing pieces of music – madrigals, songs, etc – and ornamented them in striking and virtuosic ways, adding florid runs, repeated notes, trills and more to take an often simple melody to new heights. Different violinists had their own systems and styles – Girolamo dalla Casa (d.1601) used systematic divisions of the beat into rapid runs, whereas Riccardi Rognoni (c.1550-c.1620) favoured upward leaps followed by a downward scale, for example. Webber showcases five main approaches of different composers here, and then he takes their techniques and practices to create his own ornamentations of works such as Palestrina’s (c.1525-1594) madrigal Deh hor foss’io col vago della luna, and Antonio Mortaro’s (fl.1587-1610) Canzona ‘La Malvezza’. There is tremendous urgency in the rapid ornamentation of the Palestrina, and in the Mortaro, the violin adds increasingly nervy interjections over the steady progress of the organ. There is incredible variety here, with a beautiful singing style from Webber over Devine’s softly sombre organ in Cipriano de Rore’s (c.1515-1565) Anchor che col partire (ornaments by Rognoni), and highwire violin snippets of ornamentation in de Rore’s Signor mio caro (ornaments by Webber here), this time with Devine on harpsichord. There are solo violin Ricercatas from Giovanni Bassano (c.1561-1617), and from Webber himself (after Bassano’s style), demonstrating his virtuosic and improvisatory command of the instrument to dazzling effect – the Ricercata on ‘Vestiva i colli’ by Aurelio Virgiliano (fl.c.1600) is particularly mesmerizing. Devine has his moments too, with a beautifully delicate and courtly Canzon francese prima from Ascanio Mayone (c.1565-1627) on harpsichord, a darker Toccata by Michelangelo Rossi (c.1601-1656), and a dramatic fanfare-like organ Intonazione by Andrea Gabrieli (c.1532-1585). This is a stunning, well-constructed programme that will reward repeated listening, whether you want to get to the bottom of the technicalities of Italian Baroque ornamentation, or whether you want to simply relish the virtuosity of these performers in this glorious repertoire. 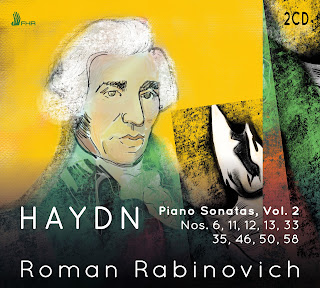 Pianist Roman Rabinovich is on his second volume of Haydn Piano Sonatas. I missed the first, but on the basis of this two CD volume, I’ll definitely be seeking it out. The nine Sonatas on offer in this volume range across most of the fifty year spread of his 62 sonatas – depending on numbering, and allowing for a few of dubious origin. Rabinovich’s approach is full-bodied, and he is not averse to using pedalling to good effect, such as in the expressive Adagio of No. 13, its beautiful melody played out over softly pedaled repeated chords. Yet he also alert to the bright playfulness so typical of Haydn, such as in the outer movements of No. 50, and the jolly opening Allegro and the brilliantly virtuosic finale of No. 13. Meanwhile, the Bachian winding lines and steady bass line of No. 46’s Allegretto trot along amiably, and Rabinovich is particularly expressive and lyrical in No. 33’s slow movement. The Rondo of No. 35 is full of fun, with a spring in its step, with occasional slight lifts adding to the playfulness. No. 58, the latest Sonata here, from 1789, has an improvisatory quality in its opening movement, with Rabinovich taking the opportunity to show us some virtuosic flourishes, before the second movement’s rattling dash of a Rondo. Very enjoyable yet intelligent performances here, well worth exploration.

(Edited versions of these reviews first appeared in Scene, September 2021)