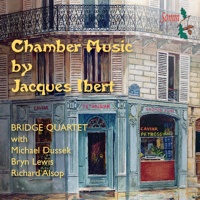 Jacques Ibert (1890-1962) was born in Paris, won the Prix de Rome at the Paris Conservatoire in 1919, and was destined for great things.  Perhaps because his musical style was highly eclectic, with a tendency for lightness and humour, he is not remembered as one of the ‘greats’, despite a vast catalogue of ballets, operas, film music (including Invitation to the Dance with Gene Kelly) and a considerable output of chamber music.  The Bridge String Quartet have been joined by friends to record an interesting selection of these chamber works, including a première recording of the Souvenir for quartet and double bass.  Ibert often collaborated with other composers, and this brief single movement work is a case in point, possibly based on music by August Gay.  The disc opens with his most substantial chamber work, the String Quartet.  This was composed through the Second World War, when his music was banned by the Vichy government, and he was exiled to Switzerland.  Whilst not explicitly reflecting the times, there is a restless anxiety in this music.  Other gems in this collection include the brief but striking Ghirlarzana for solo cello, sensitively played by Lucy Wilding, and a delightful Trio for violin, cello and harp (with Bryn Lewis on the harp here).  Ibert’s daughter was a celebrated harpist, and he wrote a number of works for the instrument – also included here is the well-known Entr’acte, which exists in a number of forms, but here is played by violin and harp.  If Ibert is new to you, or if you only know his well-known orchestral Divertissement, then this disc is definitely worth exploration. 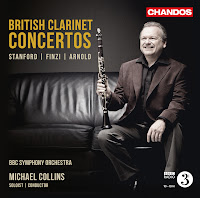 Clarinettist Michael Collins seems to be churning out recordings at a phenomenal rate, all of interesting repertoire and with playing of an incredibly high standard.  His new disc of British Clarinet Concertos is no exception.  The three works on offer here are by Sir Charles Villiers Stanford (1852-1924), Gerald Finzi (1901-1956) and Sir Malcom Arnold (1921-2006).  The works span 72 years, from 1902 (Stanford) to 1974 (Arnold), with the Finzi smack in the middle (1948).  In the Stanford Clarinet Concerto, Op. 80, there are some beautiful melodies, particularly in the central slow movement, but the legacy of Brahms is very evident – but it receives a top-notch performance here, with Collins executing the not inconsiderable demands with panache.  The Finzi Concerto for Clarinet and String Orchestra, Op. 31 has more individuality for me, and is full of mournful lyricism and again some pleasing melodies, but the interest is in the contrast between the purely string orchestra and the solo clarinet, with surprising variety and richness in the string writing.  This is clearly a work close to Collins’ heart – he played it in the concerto final of the very first BBC Young Musician of the Year competition back in 1978.  Arnold’s Clarinet Concerto No. 2, Op. 115 was commissioned by the great Benny Goodman, and unsurprisingly contains many jazz influences, with a Cadenza in the first movement where the soloist is instructed to improvise ‘as jazzy and way-out as you please’.  Here, Collins plays a cadenza written by Sir Richard Rodney Bennett, who died recently.  So three highly contrasting works, all played expertly, with strong support from the BBC Symphony Orchestra, with Collins conducted from the clarinet. 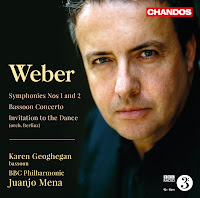 Juanjo Mena and the BBC Philharmonic have released a a great disc of orchestral works by Carl Maria von Weber (1786-1826), and are joined by bassonist Karen Geoghegan for a performance of his Bassoon Concerto.  The rest of the disc is given over to his two Symphonies, and the programme opens with Berlioz’s orchestration of Weber’s piano waltz, Invitation to the Dance.  The symphonies have never made it into the mainstream repertoire, which is perhaps a shame.  There are some great musical ideas here, and whilst both works lack a sense of real development of the material, there is some characteristically deft writing for wind instruments, particularly for the oboe and bassoon in the Allegro of the second symphony. The Bassoon Concerto deserves to be as well known as the clarinet concertos, and Geoghegan certainly argues its case well here.  As ever with her playing, she manages to bring out a remarkable lyrical line from an instrument perhaps sometimes stereotyped as a little cumbersome.  The Invitation to the Dance is a great showpiece, and Berlioz’s lively orchestration popularised the work beyond its solo piano beginnings.  The playing throughout on this disc is lively and sprightly, with particularly tight wind playing. 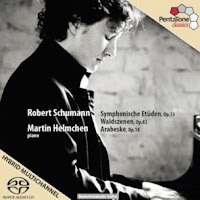 Pianist Martin Helmchen has recorded a selection of solo works by Robert Schumann (1810-1856).  The two substantial collections here are the Waldszenen, and the 18 Symphonische Etüden, and he finishes the disc off with the Arabeske in C.  Whilst the Symphonic Etudes are more overtly virtuosic pieces, the ‘Forest Scenes’ are of a more intimate nature, and are perfect examples of Schumman’s ability to convey character and imagery in such simple forms.  Helmschen’s playing is incredibly precise, and no detail is left out.  The same applies to the Symphonic Etudes, which exist in a few different forms, as Schumann reviewed the work, deleted some variations, and then Brahms added five variations that Schumann had deleted back in after his death – Helmchen includes these here.  There are myriad coded references in the music to a young woman, Ernestine, who Schumann took a shine to, even though he had by now begun seeing the love of his life, Clara.  The work is more extrovert in feel, and Helmchen responds to this with more energy in his playing.  He closes the disc with a beautifully light and delicate performance of the Arabeske.


(Edited versions of these reviews first appeared in GScene magazine, April 2013)
Posted by nicks-classical-notes at 07:25